Home Defence UK
A Symptom of a Greater Malaise
MUSIC
with Al Likilla
ALL MUSIC:
Classic Albums You’ve Never Heard Of No. 9 -
The Best of Chas N’ Dave by Chas N’ Dave

Most of the great records I cover in this column are deeply obscure, while others are less well-known on a

undoubtedly slots into the latter category. With its cartoon cover of happy working class geezers having a right

good knees up in the pub, and a brief liner history by someone called J.P. Scullery describing how the band

were once invited to dinner with Princess Margaret, this is one hell of a package. In fact, the inlay boasts a:

Growing up in the UK in the latter part of the twentieth century, particularly if you were anywhere near London, Chas Hodges and Dave Peacock’s

cultural impact was impossible to overstate. But around the rest of the world, particularly among HDUK’s many American readers, there’s a good

chance you may have missed out. That’s in spite of smack-filth urchin-rockers The Libertines citing Chas N’ Dave as a major influence and bringing

the group out on tour, exposing them to a new generation of fans after the turn of the millennium.

I’m hoping to play a small part in rectifying this unjust state of affairs with these words.

Charles ‘Chas’ Hodges began his musical career in the 1960s, backing Jerry Lee Lewis and working as a session

Here Chas is portrayed as quite the likely lad, always getting into scrapes, and often needing a piss at unfortunate

After the unpleasant murder-suicide incident involving Meek, Chas performed in a number of now forgotten bands around

with drummer Mick Burt, a man who looked like he spent his downtime shuffling round ‘specialist’ bookshops in a soiled

mackintosh, the pair splintered off on their own artistic path, creating a unique type of music that would blaze a trail

through the 1970s.
They called it ‘Rockney’; an East End take on popular music, inspired by London’s post-war pub sing-song culture, one that
has now pretty much died out, thank Christ. Cultural commentators described Rockney as “sing-along music hall humour,
boogie-woogie piano and pre-Beatles rock n’ roll”, but Chas N’ Dave were simply developing their talents. This journey would
take them from the group’s formation in 1972 to their debut LP ‘One Fing And Anuvver’ three years later.
The group went on to release nine best-selling albums but, in a move that pre-empts the contemporary focus on song-based
iPod shuffling and the whole digital music culture, it is the hit singles for which Chas N’ Dave will forever be remembered,
collected most effectively in this 2001 compilation.
‘Rabbit’ starts the set on a high, educating us in authentic cockney rhyming slang (“rabbit and pork” = “talk”) while relaying the
tale of a bloke driven mad by some bird who won’t shut up. He lists all her positive attributes, because this woman is quite the
fancy piece (“You’ve got a beautiful chin… you’ve got beautiful arms… you’ve got a wonderful smell,” etc) but then the killer
twist; “How was I to know you’d bend my earholes too? With your incessant talking!” I think there’s a lesson here for anyone
who would pursue the aesthetic to the detriment of all else. Indeed, Chas has made his point crystal clear even before that
killer product placement pay off: “You’ve got more rabbit than Sainsbury’s!”

Next up comes one of their finest tunes, The Sideboard Song. Over a rolling piano riff, Charles and David’s vocals

interlock majestically as they relate the story of some bloke who’s got a beer, and that beer is on the sideboard (“I’ve got

my beer, on the sideboard, here…”) Then comes ‘Poor Old Mr. Woogie’ in which the pair anthropomorphise the term

‘Boogie Woogie’ to lament the fact that, while the geezer they’re calling ‘Boogie’ remains a staple of good discotheques

everywhere, his old sparring partner ‘Mr. Woogie’ has all but been forgotten. It’s a moving tale, to say the least.

And the hits just keep on coming with ‘Gertcha’ from 1979, the first of eight Top 40 singles they managed. This is a

kitchen sink slice of life, inspired by Chas’s dad and his habit of spitting out the titular expletive every time something

Hotspur, couldn’t get one in!”) Like so much of cockney life, this is guttural, borderline offensive, and yet somehow

loveable. Gertcha cah son indeed.
Restrictions of space and the possibility of your correspondent going insane prevent me from covering all the highlights in this
compilation, but don’t go thinking this is a flawless set, oh no. Chas N’ Dave’s ‘Stars Over 45 Medley’, in which they assert a burning
determination to keep terrible old ditties like ‘When I’m Cleaning Windows’ and ‘Any Old Iron’ alive in the public’s collective heart, is a
noble but misguided venture. Meanwhile ‘Snooker Loopy’ has to be one of the strangest experiments in the history of popular music. I’d
have loved to be a fly on the wall at that discussion, when it was decided the best way to cash in on the televised snooker boom of the
80s was to have Chas N’ Dave duet with a bunch of snooker players (the now extinct ‘Matchroom Mob’), and all percussion be

provided by the clack and clinck of some coloured balls.

That said, ‘Snooker Loopy’ does partially replicate the wonders of hallucinogenic drugs, what with the famously bald Willie Thorne

(left) reciting lyrics about the possibility of chalking his own head. But anyone privy to these sporting professionals’ attempts to sing

in tune, particularly Dennis Taylor’s off-key Iain Paisley bark, could only conclude this was one musical experiment best

More enjoyable is ‘Margate’, a paean to holidaying in what was once the promised land for

cockneys. This song soundtracked the ‘Jolly Boys Outing’ episode of the greatest ever British

sitcom Only Fools and Horses, but the seaside town depicted here has latterly gone to rack,

ruin and the BNP, this song now acting as a lament for lost working class days (“You can

keep your Costa Brava…”).
Then comes ‘Bored Stiff’, exploring the existential despair of the stop-at-home nihilist who fails to see the point of another night on
the foaming ales (“I could have a wash and go out to a disco…”). Or ‘In Sickness And In Health’, where disillusionment with marriage
is undercut by alcoholism to show Chas N’ Dave’s more cynical side (“Me dinner’s always burnt when I come home from up the
pub…”) But the flipside to this is ‘Massage Parlour’, a gobsmacking number about the innocent days when going for a rubdown wasn’t a euphemism that involved trafficked women being made to do whatever you want sir. No, this is an innocent little song about actually getting a massage (“She’s got a good technique, gonna book

it next week, gonna have a good time”), and good for them both.

But no discussion of these greatest hits would be complete without a dissection of what is probably Chas N’ Dave’s signature tune,

for good or ill. Because beneath the welcoming veneer of cockney culture we experienced in the 70s and 80s was a darker flipside,

of sexism and prejudice, and reflecting this comes ‘London Girls’. On the face of it, simply a celebration of femalekind around

Hodges and Peacock’s locality, set to one of their catchiest tunes, underneath this optimistic jig it becomes clear our boys are

celebrating a subservient view of womankind that went out with Jim Davidson. Apparently London girls will; “darn your socks, mend

your trousers if you bust ‘em” and, with a tantalising hint of xenophobia, Hodges and Peacock warn naïve cockney boys against all

those foreign types coming over, displacing East End lasses from their rightful place at the top of the tree: “Some people sing about

Deutsche girls, or girls from California. They might be alright for a night all right, but don’t trust them I warn ya!” Note the snipe at

their great rivals The Beach Boys there. Chas ‘N’ Dave still play London Girls live to this day, and every time they do it sets the

feminist cause back twenty years.

Overall this compilation is a fitting tribute to two greats whose story has a bittersweet ending. In
2009, after 35 years together, the band announced they were to split, with Dave unwilling to tour after his beloved wife Sue succumbed

to lung cancer. Chas, who still sees Dave every week, chose to respect his partner’s

decision, telling the press that Dave; “has horses and loves driving them around his

impression by Clint Panzerdivision can be seen here to the left)

But before Dave can retire to paint his Romany caravans, these staples of prime-time

variety shows and light entertainment specials throughout the 1980s, these influences

on everyone from Pete Doherty to Roots Manuva, will embark on a farewell tour during

2011. They will play the hit songs one last time to adoring audiences and roll their

Rockney knees up into your town. Catch these genius innovators while you can.
The Best Of Chas ‘N’ Dave is available for a few quid from all good online and real world stockists. 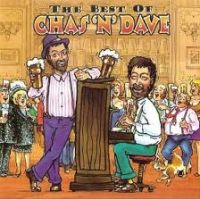 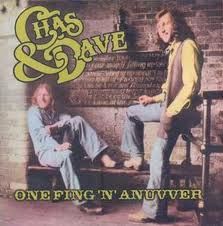 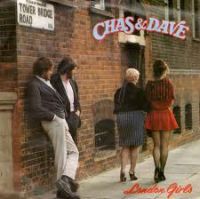 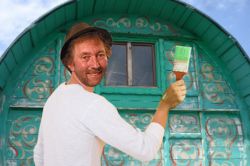 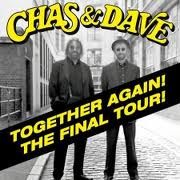