the deepest. That’s when the first decent band you hear playing in a particular idiom causes the most

excitement, more so than some feted but distant classic. This is why the young ‘uns of today go for

Lady Gaga over Madonna, connect with The Vaccines more than the Ramones, prefer Muse to Queen; or

to early Radiohead; or to a big steaming pile of horsecrap.

However hard we might try, this tendency is impossible to suppress. When I was growing up The Jesus

and Mary Chain spoke to me more that the distant sounds of the Velvet Underground or The Stooges, and

the JAMC remain my preferred listening, over Black Rebel Motorcycle Club or Glasvegas. It takes a strong

will and a rare knack to retain a love of new music beyond your mid-twenties. Only a few display the

If you were a teenager with an ear for guitar music in the mid-nineties the listening options were nothing like what we have now. Most likely you

would tune in to the Evening Session on Radio 1 of an, er, evening. This show was hosted by Steve Lamacq (who went on to BBC6 Music) and Jo

Whiley (who went on to be Satan’s leading emissary on earth, and Glastonbury).

Round about 1993 Lamacq played an instant, crunching classic about an old guy with some kind of degenerative neurological

disorder who ended up “underground, next to an oak tree”. Immediately it was obvious this wasn’t an Oasis song. It turned out to be

‘Albert’s Twisted Memory Bank’, the work of Tripmaster Monkey, an American band who took their name from a po-mo beatnik novel

by Maxine Hong Kingston. Unfortunately, by the time recognition came their way, this monicker had the effect of making the group

sound like some kind of superstar DJ act (here we go!).

But they weren’t. The story of Tripmaster Monkey begins in 1987 as Chris Bernat, a junior in high school at the time, starts to think about fronting a loud band. Bernat was joined by youngsters from around the Quad Cities of Illinois and Iowa; Jamie Toal on guitar, bassist Wes Haas, and Marty Reyhons smacking the skins. They spent the next few years growing up, getting better, and writing songs, before releasing an EP in 1992, a record that brought them to the attention of Warner Brothers.
With major label backing, TM’s debut was recorded at the legendary Fort Apache studios in Boston, where the
likes of The Pixies, The Lemonheads and Dinosaur Jr laid down some ‘cuts’. ‘Goodbye Race’ came out in 1994
and it's a collection of powerfully melodic guitar rock tunes with barely a weak moment among them, this debut
showing the benefits of half a decade spent honing your sound. Although the band were too clean to become part
of the burgeoning grunge movement, Goodbye Race does cleave to the prevalent quiet-loud dynamics of the time,
albeit buffed to an alt-rock sheen (and with the occasional move into mellow atmospherics or hardcore territory).
The packaging too, could hardly fit in better with the indie-rock style of the era. With its hand-sketched cover,
random photos tampered with abstractly, and song titles that range from the punning to the absurd, Goodbye Race
is the complete mid-nineties package. The aforementioned opener kicks things off, an explosive track interrupted by noise freakouts as the tale of Albert is relayed, his happiness before the end lurking in unreliable memories: “He’d like to think but he can’t remember, it happened over time.”

Second track ‘Pecola’ is a more straightforward chug, instruments coming in one by one as Bernat’s strong vocals combine with an insistent

guitar line to propel the song onward. It’s followed by the most anthemic track here, a fuzzed up guitar riff announcing the grammatically

incorrect ‘Shutter’s Closed’, the lyrics from the point of view of some unhappy, bedridden addict (“give me your hand, get me a doctor”),

words acting as a counterpoint to the rush of the music and a truly exhilarating guitar break.

From there the volume rises; TM launching into the false start hijinks of ‘Faster Than Dwight’ at the second attempt. This speedy rush is

followed by the punning ‘Valium’, likening the titular medication to less obvious downers, from TV to alcohol (“I turned the volume down, and sat

down to drink”).
The first side of Goodbye Race ends with the moody swell of ‘Roman Catholic Haircut’, an ode to conformity mixing religion and barbers to create a metaphor for something much larger (“Everyone sing along, until the only voice is your own”). Then comes the melodic clatter of ‘Is That My Bagh?Dad’, which has nothing to do with the Middle East. Rather this is the best song ever written about finding out your father's helping himself to your marijuana when you aren’t looking (“I don’t mind, if the bag’s not full, but do you think, dad, I am some kind of fool?” followed by: “There’s no justice, dad rummage through my closet...He takes weed from me; little here, little there, little here, little there…”)
Next up comes the youthful rage of ‘Gravity’ followed by ‘The Key’, built around a memorable bass line and chant-a-long chorus
until the song winds down, instruments dropping out until we’re left with the drumbeat, gradually slowing to prepare us for the next
song. ‘Night of Day’ is the clearest illustration of Tripmaster Monkey’s way with quiet-loud alternation, paralleling the rotation
of the earth with underplayed verses giving way to hollering as Bernat cries: “the sky was as loud as the music”.
The penultimate song, ‘Not Quite Sure’, is the most lo-fi and ambient in this set, longing and uncertainty through plucked guitar
notes and distorted vocals. But the noise level rises for the finale, a drum solo intro to one last invigorating epic. Wordplay is to
the fore again in this ‘Depravation Test’, conflating the depravity and deprivation of young lives which combine too much indulgence and too little rest (“I get no sleep tonight…I have no time, I get no food here”). This sense of waste, of being unmoored in your own life, can only lead to emptiness and disgust, Bernat declaiming: “There’s nothing in this fucked up vacuum.”
And so ends as solid a debut as you’ll hear, full of hummable tunes and thrilling moments, the excitement of nascent adulthood and communal noise, making what one blog calls “earnest semi-alternative rock riffing”, a phrase that doesn’t begin to convey the experience of listening to Goodbye Race.

Signed to a subsidiary of Warners at the time, Tripmaster Monkey toured the record around the world and then, in one of the worst

cases of ‘difficult second album syndrome’ I’ve ever encountered, rushed into the studio to record a follow up.

‘Practice Changes’ landed in 1996 with a bellyflop that didn’t ripple across the Atlantic. The band’s sophomore effort is only available in

the UK on import and its best not to bother. My associate, DJ Nutsac, brought me a copy back from America and it soon became obvious

that TM’s second long-player was very much the antithesis of their debut, being meandering, overlong, and all but hook-free. These

nineteen tracks and pointless bonus fucking around sounded like the work of bad Smiths impersonators, which was surely never the

point. The following year Tripmaster Monkey disbanded, the guitarist moving to Chicago while their bassist decamped for Portland and

drummer Reyhons joined an act called Einstein’s Sister. Meanwhile Chris
Bernat went to sing with local boys Chrash who have put out some decent records that don’t sound much like
Goodbye Race either.
Despite these problems of geography, Tripmaster Monkey have reunited a few times over the past fourteen years,
most recently to celebrate the Rock Island Brewing Company’s thirtieth anniversary in 2009. What they leave
behind for posterity is a debut LP which, in its solidity, brevity and consistency, is just about perfect.
‘Goodbye Race’ was available online, new or used, for a couple of quid the last time I looked. 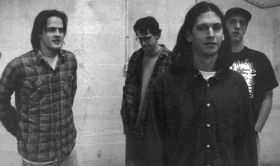 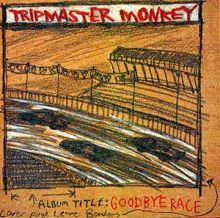