Music
with Al Likilla
Home Defence UK
A Symptom of a Greater Malaise
Classic Albums You’ve Never Heard Of No. 7 -
ALL MUSIC:

out there, from the lead singer who kills himself at the Belgian pop festival in

a misguided fit of remorse, to the million-selling group who split over ‘musical

differences’ (which usually means the coke-addled guitarist loves their new

album, while the others can’t even listen to it). The final straw for San Francisco Bay’s Engine 88 came back in

1997 when, after gigging in support of their second LP for much of the year, the band found themselves without

a label, stymied by what the SF Chronicle called “severe underexposure”, and in possession of a busted tour

van they couldn’t afford to fix.

And so Engine 88 gave up, abandoning all the years of toil that had promised so much but ended up mired in

lack of recognition. They quit, but not before setting down a valedictory collection of unrecorded songs inside

tracks in ‘Ten Foot Tiger Shark’ and ‘Matchbox’, as well as a number of songs that were less memorable and

It had all been very different earlier in the decade, back when Engine 88 began in a flash of optimism and

motoring imagery, releasing two singles on their own Shut Up and Drive label. The band would comprise Dave

Hawkins on Drums, Damon Wood and Eric Knight on Guitar and Bass respectively (both of whom had played

in ‘Smoking Section’, one of the definitive San-Fran funk-rock acts of the time), as well as Tom Barnes on

vocals and guitar. Barnes was renowned locally for his role in college rockers

Aniston-dater Adam Duritz.
One, possibly apocryphal, story claims that Barnes and his bandmates wanted to simply name
themselves ‘Engine’, but there were eighty-seven other acts in the Bay area called that, hence the
modification. Right from the start Engine 88 had a distinctive sound to go with their car obsession.
Appropriately enough, it was the musical equivalent of accelerating away from a stop light; fast and loud
and leaving a cloud of smoke in its wake.
Some categorised their sound as ‘pop-punk’, but it would eventually become apparent that Engine 88 were
very much proto-Emo, back in the days when Emotional Hardcore was a valid and innovative musical

sub-genre, rather than an excuse to wear eye shadow and wallow in self-pity

well into your twenties.

Even if their lyrics did generally delve into regret and self-beration, Engine 88’s music was full of energy

and thrilling melodies, while their live performances placed the band in a lineage going back to Husker Du

and Big Black. The sincere, sometimes pained, vocals of Barnes were not part of an image they

maintained outside of the songs. Instead band members treated their musical ‘career’ with the levity it

deserved; jokes and camaraderie and reviewing beef jerky online from live stops across the US. This years

before Twitter.
As is often the way, Engine 88’s debut record wasn’t fully-formed, although ‘Clean Your Room’ is definitely worth a listen with ‘Firefly’ and ‘The Bottle’ proving particular highlights. These were brief and pummelling pop songs, the latter of which formed my initial exposure to the group when it appeared on a Caroline Records sampler.
But it was 1997’s ‘Snowman’ where Engine 88 really found their groove, when the band
left behind their auto fixation and proved themselves songwriters of the highest order,
turning what one reviewer calls “ripping guitar riffs, chugging basslines… almost yelped
vocals” into a collection of songs accessible to all.
Snowman starts as it meant to go on with the percussive hammering of ‘Ballerina’
before an exhilaratingly catchy paean to the downer ‘Seconal’, this song including a
memorably hollered mantra: “Just like Saturday night!” From there Engine 88 fluctuate
between the slower, more self-lacerating tracks (which aren’t exactly ballads), and the
full-on melody assault of their faster songs. The former include ‘Istanbul’, ‘Butchery’ and ‘Cold-Blooded’, with lyrics like “I have such an old man’s face, it breaks my heart,” or: “I have only jealousy, and the patience of a dog”. The contrast with ‘Mustard’ or ‘Trouble’ with its wonderfully apt cry of “Geronimo-o-o-o!”, breaks up the set well, and then comes ninety second thrash ‘Killer Willow’. Here the refrain consists of the shouted name of former Secretary General of the UN, Boutros Boutros-Ghali repeated, I can only assume, because it sounds really good over a full-on backing.

But the record’s undoubted highlight and obvious single is ‘Manclub’, a thrilling adrenalin rush which explores a

particular kind of disturbing masculinity as the protagonist cries out: “I wore dresses in high school, from

Nairobi… I first began to kill in my dreams at fifteen”. ‘Manclub’ walks a fine line, between musically addictive

and lyrically unnerving, and Engine 88 pull off the balance splendidly, depicting a paranoid and bigoted individual

who yells: “Look out she’s a woman, who wants you to beat her!” The listener might never wish to meet this

individual, but still finds themself keen to skip back and play the track once more.
‘Snowman’ ends with what seems a sweetly brief foray into romantic or familial affection, the one-minute long ‘Precious’ (“There is only one thing that I truly love, good morning Precious…”) but the ominous musical backing acts as a counterpoint, hinting at darker emotions beneath the surface. Then the record ends, thirteen songs in thirty-seven minutes and not a dud among them.
At the time it felt like a convincingly strong release by an act at the top of their game, and the corresponding
support slot with Counting Crows (thanks to the old Duritz connection) ought to have meant Engine 88
carved a niche on the alt-rock scene, or at least enabled them to replace the wheel axles on their van.
Sadly it was not to be. The record, recorded at Boston’s legendary Fort Apache studios and featuring a
shout out to “all the talented auto-mechanics who have bailed us out in desperate times”, wasn’t successful
enough for the band to be retained by Caroline, and the rest is now, unfortunately, ancient history.

Fast-forward to 2010 and Tom Barnes records material in the soft rock idiom, while guitarist Damon Wood

earns his keep playing in both a Pretenders tribute act, and a rhythm and blues covers band called,

excellently enough, ‘Curtis Bumpy’. But the founder members of Engine 88 remain on good terms, and the

group reformed in 2006 for a special, one-off concert to mark the publication of a book of rock photography

by Peter Ellery. Footage of this performance can be found online, wherein Engine 88 prove themselves to

be as enthralling and loud and energized as ever.

‘Snowman’ was available secondhand for a couple of quid on Amazon the last time I checked. 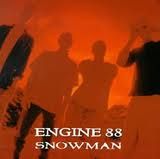