Home Defence UK
A Symptom of a Greater Malaise
MUSIC
with Al Likilla
ALL MUSIC:
Classic Albums You’ve Never Heard Of No. 16 -
Some Stupid With a Flare Gun by Ass Ponys

Southern Gothic is a type of American literature that originated back in the forties and fifties, when the

likes of Faulkner and Flannery O’Connor blazed a trail through deep south settings, depicting a milieu

women on the verge of madness, and less-than-normal siblings who, because they were clearly special,

grew up in a shack and shared a bed with the mules. The settings were remote and hostile, and within

them we saw a people aware of hellfire, never far from an outbreak of brutality or prejudice, their behaviour

illustrating what really lays beneath the respectable, Godfearing exterior such communities present to the

As the twentieth century wore on, theatre, film and TV got in on the game, with the hothoused plays of Tennessee Williams bubbling with repressed

Eugene Edwards’ Sixteen Horsepower and Wovenhand along with Nick Cave (who, despite being Australian, very much operates out of a Gothic

idiom) gave us songs of murder and redemption, often with a Biblical slant.

For me, the finest exponents of Southern Gothic music in recent years have been Cincinnati’s Ass Ponys. Theirs is a mixture

of rock and country, led by songwriter Chuck Cleaver who grew up in Ohio, steeped in the character and true-life tales of the

American South. By the time Cleaver came to form Ass Ponys in 1988, with John Erhardt on guitar, drummer Dan Kleingers

and the brilliantly-named Randy Cheek playing bass, he was the veteran of a decade’s worth of local bands, all of varying

This extended apprenticeship, in acts like ‘The Lunchbuddies’ and ‘Men Without Bones’ meant that, when a thirty year old

Cleaver came to release his first album with Ass Ponys in 1990, he had spent years perfecting his craft; the lyrics and

the independent Okra label, its title track an example of the subject matter that fascinated

Chuck for the next decade and a half, the song depicting a beaten lover with “blood running
from her mouth”. ‘Mr Superlove’ the song would later be covered by the Afghan Whigs on their ‘Gentlemen’ single, with both the Whigs
and Ass Ponys exploring the violence they saw as inherent in a certain type of masculinity.
Kleingers was replaced by Dave Morrison and ‘Grim’ followed three years after their debut, Ass Ponys riding the nineties alt-rock rush
to sign with A&M for 1994’s excellent ‘Electric Rock Music’. As in so many cases, major label backing proved to be a mixed blessing,
with corporate issues and line-up changes (founder guitarist Erhardt had been replaced by Bill Alletzhauser by now) meaning fourth
record ‘The Known Universe’ was effectively buried. It took another four years before Ass Ponys would resurface, back on an
independent for the pinnacle of their sound, 2000’s ‘Some Stupid With A Flare Gun’.
From its painted cover of a farmboy on a log holding a massive chicken, to songs full of dirt farmers, TV evangelists, buzzards, and the ‘devil’s minions’, SSWaFG is Southern Gothic to its core. Even the title invokes the genre; someone down in rural Kentucky or Indiana speaking a punchline with an undercurrent of rednecks gone

In terms of artistry, the break from recording did this band good, with Alletzhauser in particular adding a new

dimension with his playing, while Cleaver’s stories are worked to a fine point of allusion and ambiguity. Additionally,

the production from sometime power-pop deskman Brad Jones brings to SSWaFG an accessibility, a depth to the

Ponys’ sound, that wasn’t present on the earliest recordings.

It’s all there on opener ‘Pretty As You Please’, a spare country backing that rears up, maniacal cackling

underpinning a memorable earworm as a lost woman self-harms on her birthday; shoots “reverend father on the TV

set” and ends with a female relative or acquaintance (her sister? a friend?) hanging in the neighbour’s barn “long

legged with her toes near touching”. This demented protagonist opts to pick up an axe, “walking out past the

woodpile claiming, she’s gonna bring her back”.
From this disarming start Ass Ponys launch into ‘Astronaut’, the catchiest track here, with a wave of guitars which frames Cleaver’s keening, faintly Neil Young-ish delivery; what one reviewer called a “homely-Gremlin falsetto”. Against the exhilarating melody comes another vignette of a troubled girl, in love with some space traveller she's never met, unable to accept he has died in whatever horrendous fate awaits these men; some Shuttle conflagration or spacewalk mishap. Brooding on her imaginary lost love, the girl’s behaviour grows ever more primitive and inexplicable, until: “walking in an open field, she comes
across an ankle bone, takes it home and drills a hole, and wears in on a leather thong”.
‘Some Stupid With A Flare Gun’ is another of those records where it’s impossible to find a weak link, and the quality control
continues with the more subdued ‘Fighter Pilot’, Cleaver using the fate of that man in his titular plane (“all the ammunition’s gone,
and the engines have been blown”) as a relationship metaphor, the protagonist stuck in a bad situation; “diving down over you, like
a fighter pilot”. This is followed by the instrumental break ‘Love Tractor’ which features the happy gurgling of a baby, before ‘Your
Amazing Life’ proves Americans do have a firm grip on irony after all. This track is scathing in its depiction of a man who “never had
a rhyme or reason, a notion or clue”. Cleaver excoriates this ineffectual specimen, someone who hasn’t the intelligence to match
his self-belief; “oh man you really showed us, with your amazing life”.
More characters come before us, lost and alone in a harsh world, confronted by pitiless nature and the evil endemic to humanity. Here’s the dirt farmer’s wife in ‘Sidewinder’ “finding worms in everything” or the hypochondriac of ‘Swallow You Down’ , a pure hit of Americana with a shredded solo from Alletzhauser. The lyrics depict a melodramatic patient, the one who cares for her unwilling to let this downbeat fatalist be submerged. There’s a knowingness to Cleaver’s lullaby-like croon when he says: “I heard you’re dying again.”

From here Ass Ponys hurtle through the demented thrash of ‘X-Tra Nipple’, redolent of in-breeding and small-town mutation, the

singer “so fascinated by these special people”. Then a temporary respite from the tableaux of grotesques, ‘Magnus’ entering the

worldview of the eponymous little boy who imagines himself a robot fighter.

But we’re back in the grip of an undertow of disquiet with the elegiac, closing triumvirate, starting with ‘Casper’s Coming Home’,

featuring Cleaver’s most affecting vocal performance. He uses the language of corpse disposal to assess the aftermath of a tragic

but unspecified event, death and ghosts and horror set to a beautiful melody: “this is sadness, and here’s what you can do with it,

tie it to a cinder block, and shove it in the lake…”
The fine delivery continues with ‘Kitten’, another exploration of grief as a widow remembers her deceased husband, his pet name for her evoking memories of a happier time as she arranges a wreath in his memory “back warmed by the sun”. A harmonium keens in the background and that same heat beats down as in days gone, when he “called her kitten”.
Things reach an appropriately unsettling end on ‘Between The Trees’, Cleaver taking the role of some lurking beast, hidden in the leaves
to watch a vulnerable child, her mother calling her to come. But it’s already too late, and we can’t tell whether the narrator is voyeur or
murderer, a predator who lies in wait, or just some creature observing; uninvolved in the violent act. All we can be certain of is the
disquieting nature of events, “in my bed amidst the leaves, I can barely hear you screaming” and later, while the victim ‘sleeps’; “I lay
above you, dreaming”.
Overall this amounts to Ass Ponys’ strongest record, a classic of its kind that is insidious, hummable, and shocking by turns, with
Cleaver, as the critic Robert Christgau put it, creating “a reality that testifies to the weird spunk and rough shapeliness of lives”. The
year after this triumph Ass Ponys would release what proved to be their swansong, the more subdued but still worthwhile ‘Lohio’, a
set that edged them away from the social outcasts and bloody acts, although not completely, as the likes of ‘Baby In A Jar’ and the

dependent addicts depicted in ‘(Baby) I Love You (Baby)’ would illustrate.

Having toured with the likes of Pavement and Throwing Muses, Ass Ponys went on indefinite hiatus in 2005, a year before

a compilation of early songs found a release; ‘The Okra Years’. Cleaver has since focussed on a very different project, the

excellent Wussy, who have four LPs of fine R.E.M.-influenced jangle-pop to their name. Here Cleaver has broadened his

lyrical purview and often takes a back seat to the vocals of ex-girlfriend Lisa Walker. Excitingly, Wussy (left) are over here

in September 2012 for what, I believe, is their first UK tour.

Chuck is in his fifties now and continues to make great music, Cleaver’s former band reaching its peak at the dawn

of the third millennium with a record that is as accomplished and memorable as it is dark, desperate, and occasionally

horrifying, With Chuck and his cohorts working out of the aesthetic, Southern Gothic was in safe hands.

‘Some Stupid With A Flare Gun’ was available online, secondhand or new, for about four quid the last time I checked. 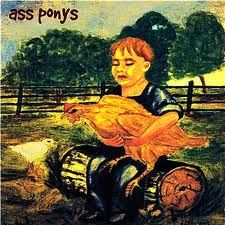 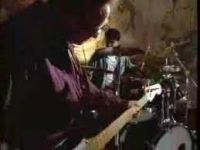 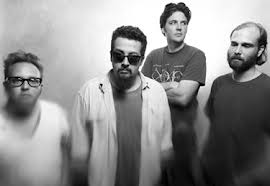 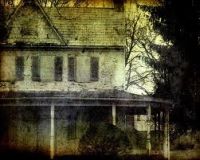 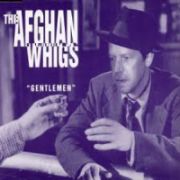 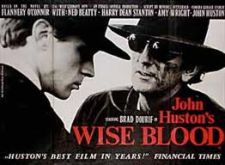 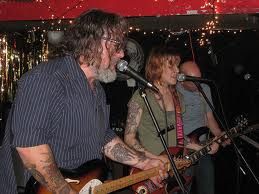 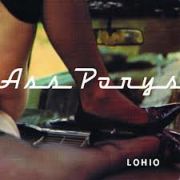