Home Defence UK
A Symptom of a Greater Malaise
MUSIC
with Al Likilla
ALL MUSIC:
Classic Albums You’ve Never Heard Of No. 10 -
The Telephone Album by Lotion

After last time’s foray into the ‘Rockney’ mainstream (R.I.P. Only Fools and Horses creator John Sullivan by the way;

taken too soon) this update we’re back on an underrated American indie rock tip with a record you actually, properly,

won’t have heard of.

Not unless you lived near Manhattan in the nineties that is, back when a young graphic designer named Tony

Zajkowski, inspired by UK rave posters, came up with the concept of ‘Lotion’, an act that featured on the flyers he

distributed across the East Village. Zajkowski started a buzz, appropriating brand logos and mastering hype to further the cause of these new

musical sensations who, at the time, didn’t actually exist.

So Tony would need an actual band, to back up his vocals and contribute to the songwriting. To that end he recruited brothers Bill and Jim Ferguson

(on bass and guitar respectively) while his friend Rob Youngberg played the drums. They formed in 1991, and soon became renowned throughout

unannounced after the headlining act finished. And when Lotion eventually got around to recording their songs it was in a studio just a block

away from Times Square. Very local.

I could have picked any of their three records including 1994’s ‘Full Isaac’, the life-affirming debut where the band thoughtfully

left space in the inlay for your ‘Notes’. ‘Full Isaac’ itself won the accolade ‘debut album of the year’ in the Village Voice

newspaper, and its modest success led to tours supporting the big alt-rock names of the time like Pavement and Mercury Rev.

Then came the follow up, ‘Nobody’s Cool’, one of those great truism album titles which boasts a more confident sound, buffed

to a sheen but still capable of twisting their influences (Husker Du in general, and the songs of Grant Hart in particular) into

something new and compelling. The songs here were, by turns, emotional, brooding or exultant, and ‘Nobody’s Cool’ subsequently made it into

NME’s top 50 albums of the year. Additionally, in something of a coup, the LP boasts a liner tribute by possibly the greatest living novelist, and

certainly the most elusive one now Salinger has departed, Thomas Pynchon. Apparently this happened because the mother of one band member worked as a cleaning lady for the great man, persuading him to listen to her son’s music before penning some words in response.

Next up was 1996’s ‘Agnew Funeral E.P.’, the last of the Lotion releases to be distributed in the UK, featuring my all-time favourite

Lotion track, the moving slow-build of ‘Marijuana Vietnam’. Perhaps more than any other, this song

illustrates how appropriately named this band are, the music here overwhelming you in an almost a

But it is Lotion’s swansong from 1998 I want to focus on here, both because of its obscurity (‘The

Telephone Album’ never made it across the pond) and because, in many ways, this is their most

across the board. Hell, there are even pictures of band members on the sleeve here, something Lotion

had assiduously avoided in the past.
The record itself starts with a deftly sequenced one-two-three punch of immediate hooks, blasting through an ironic count-in (“I-2-3-4…5!”)
for ‘Rich Cop, Poor Cop’, a song that signals Lotion’s intent not to be lost in the indie ghetto all their lives as the band kick it out of the park with massive guitars and a singalong chorus (“and when I reach the station… I’ll need re-sus-ci-tat-ion”).

Second track ‘Feedback Queen’ is almost as good (in fact, many call it the greatest Lotion song of them all). A paean both to the guitar

squall that dominated so much music of the day, and to, um, being a bit of a Queen about it, probably, this starts out as fairly typical alt-

rock tune but halfway through the finest middle-eight I’ve ever encountered drops in, taking the song to a whole different level.

The final part of this opening triumvirate comes with ‘I Love Me (Vol. 1)’, a cheering bop to celebrate the childlike joy of being in love (“I

awaken, and suddenly I’m naked…”) and just being alive in general. A funky guitar line combines with upbeat vocals and high in the mix

sliding on our bellies”, before the song fades to a coda sounding on a distant radio somewhere.
Of course, after such a terrific opening, it was next to impossible to keep up the standard for the final nine songs, but Lotion give it a shot, taking things down for the almost waltz-like ‘No.99’. This track takes it’s time before eventually exploding into another anthemic chorus (“Be careful what you say, she reads your writing”) folloiwed by the fast rock n’ roll of Mr. Mosquito, a tale of one bored slacker who “took the chance to count the hubcaps, most I got done all day”.
From the loudest moment to the most understated; a couple of extended slower numbers begin with the melancholic Glorified (“We wandered round the streets for years, stealing other peoples’ beer”) and the not-so-memorable ‘West of Here’. These tracks sit a little too close to turgidity, but The Telephone Album is soon redeemed through the knowingly named ‘My Name Is Prince’, one of their more swinging numbers, a song illustrating why Pynchon claims of Lotion that they display “the weird, jiving sense of humor of a cruise combo”, Zajkowski crying; “pull off your headphone mix… and I am funky!”
Lotion are stretching themselves now, into the scratchy verse / guitar explosion chorus of ‘Drop Dead’, before ‘Blackjack’s stompy,
almost acapella chug of regret (“I’m so in love, never again”) and ‘Mr. President’ with its cry to a poser musician, “you just want to
be John, but you’re so freakin’ Paul!”
We close with the time-change epic ‘5th Fret, Distant Cousin’ wherein the nineties slacker archetype surfaces once more, just;
“staring at the lighting fixture”, and that’s it, an entertaining and absorbing set, commercial enough to get the group on ‘Buffy The
Vampire Slayer’ in the course of their promotional duties (pictured right).
But The Telephone Album wasn’t so successful that Lotion were convinced to go again. The group went on ‘hiatus’ in 2001, with fans
reporting around seven numbers from Lotion’s latter-day live sets never recorded and now seemingly lost forever. It stretched on until the ‘hiatus’ became a formal

split, Zajkowski moving on to play bass in the soon forgotten ‘Schizo Fun Addict’ before combining his graphic design interests

with more music in ‘Honeycomb’, another link up with drummer Youngberg and more of a multimedia interest for them both.

So what we have in all are around forty songs to remember Lotion by, many of which are both enthralling and superb, with each

recorded during the decade they were active and somehow managed to get theor music out there. As Pynchon says on that

earlier inlay, “a working band is a miracle of modern life”, and us music fans should never take those miracles for granted. 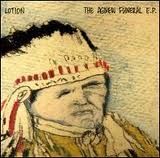 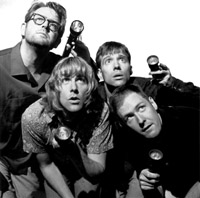 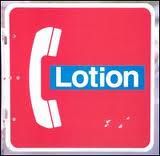 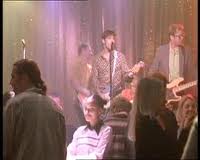