out a rhythm vaguely reminiscent of early 2 Unlimited, on a toy drum.

Struggling awake, I look to the empty beds surrounding me. This YMCA was always deserted by 11am (and

the propaganda about these places has dated very badly, maybe their funding has been slashed but you won't

temazepam). With a yawn I stare at Nutsac who wears a cymbal on his head and marches in time with the

This was beginning to hurt. I let out a moan and Nutsac thrusts a flyer into my face. "They're here Al, they're finally here!" What was happening? I read the advert aloud."In the West End for the first time - STOMP!"
Oh Jesus.
"Look what it says here." Nutsac grabs the leaflet as I fish out my belongings. "See? They use everyday objects..... but in non-traditional ways!"
"Right." My shoes smelt like a badger had been sick in them. "All that means my friend, is instead of putting a dustbin lid on a dustbin like a normal human being would, they choose to smack themselves in the face with it."
"It's not just men hitting things though." The glint in Nutsac's eye was truly tragic. "There's ladies too, and sweeping." He gesticulated to illustrate. "The experience is all about music and dance, theatre and choreography."
"It's an evening of mental anguish at best."
Nutsac looked crestfallen. "I thought you were meant to be researching musical extremes for that pissant webzine you do."
He was right. Peeved, but right. I couldn't turn down the opportunity to see this act, no matter how much I wanted to. Home Defence UK needed me to cover popular movements, music above and beyond whiteboy indie swing. I couldn't really get out of it. Besides, Nutsac had already bought three tickets.
Later, on my way to the West End, I reflected on the remarkable longevity of this collective known as STOMP!. Like a million other kids around the land I'd witnessed their schtick on TV and been bored by it. Their act always seemed to crop up during Royal Variety Performances, in-between Brian Conley and some smarmy acrobats. Or they might fill a slot while the Luxembourg jury ruminated on who to give "douze" points too. My publicity material boasted how STOMP! were proud to have no speech, dialogue or plot. Their show sounded a lot like the film xXx in this respect.
It takes a special kind of man to venerate a whole evening of thumping random objects and I knew two of them. Sensibly Mrs. Nutsac had refused to accompany us so Gay Ben, a drummer by trade and so-called because of his upbeat outlook on life, had snapped up the spare place. There he was outside the theatre, helping Nutsac lock a wheelbarrow to a post, out of which they retrieved a variety of instruments we hoped to use when gaining the performers' attention. These two men wanted to get closer to their heroes and I had to agree, even though they were clearly deranged.
Once inside I ambled over to the concession stand while Nutsac got popcorn. There was a wide array of merchandise, all adorned with the patented STOMP! bin cover; mugs, t-shirts, actual dustbin lids. Unedified, I helped Gay Ben lug some drums into the auditorium, storing the props under our seats. Gay Ben then gave us a brief summary of what we were to expect; a "modern symbiotic synthesis of movement and music" apparently. I'm sure that's also how the busker at Victoria Tube Station describes what he does too. Coincidentally he turned out to be the support act, standing alone in the spotlight with his stained kettledrum to holler atonally for an interminable period. After about twenty minutes I was wondering if I should give him some spare change or something, but before I could decide several policeman appeared to escort him away, the busker's trademark cry of "oh-ee-oh, a-horgle, yiiiieeeeeee" gradually becoming more indistinct as they disappeared into the wings.
Then it was time for the main event. STOMP! took to the stage in a miasma of poles and paint scrapers, several dozen bendy fellas performing solos with their hands and feet. It really was quite a sight, all these theatrical types who'd apparently been "drumming since birth". However as the minutes dragged on this quote came to seem like a serious indictment of their parents. I was growing listless and enervated, my right leg had managed to go to sleep and was making the rest of me uncomfortably jealous. All these bins weren't satisfying anyone and I knew we had to do something quickly. In one swift movement I pulled out the bass drum, strapped it to my torso and approached the stage, closely followed by Gay Ben wielding tom-toms and Nutsac on the wood block. We began banging our props as a particularly intense session of "pipes and brooms" wound down before us. Now, I have no training on the drums, but even I could see our contrapuntal whacking complimented the noises from onstage. One of the performers even allowed his concentration to break and began to clap in time with the synchronised sounds. Then he extended a hand to help us up onto the dais, which isn't easy when you've a four foot bass drum attached to your gut. I made it though, standing there before a disparate audience as STOMP! gave us a minute to show off for the punters. Sadly it soon became obvious that the three of us were one-trick ponies, and this pony had blurred vision and was sweating like an Italian. It was at this point that one of the professionals edged us into the wings with his paintbrush and the show returned to normal. We got a cheer from the audience though, but whether they were in favour of our impromptu performance or just happy to see us going I couldn't say for sure.

audition the following week. Sadly the only one of us with any percussive ability had to go and

do a day's work, leaving myself and Nutsac to improvise as best we could. Needless to say it

was a disaster. My associate wasn't comfortable pushing a broom around and kept falling over

his own feet. Meanwhile, in response to the directive from a Lee Bowyer lookalike that I should

depict "a character who lives and breathes in the STOMP! world, where rhythm is the only

language", I succeeded only in creating a dyslexic retard. I'm not disheartened though. Like

STOMP! themselves we'll always be back with a bang. If I've learnt anything from this episode

it's that too much of anything leads to overstretched ability and melancholic regret, and tha includes drumming. We've all got to persevere within the boundaries of our talent. Remember Roger Whittaker? Course you do. And he only had a whistle.
A special edition of 'Sesame Street' featuring STOMP! annoying Oscar the Grouch is currently unavailable on video and DVD. Gay Ben can be seen on tour with The Naughty Trust. Nutsac has tinnitus. 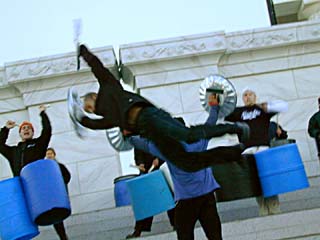