Home Defence UK
A Symptom of a Greater Malaise
MUSIC
with Al Likilla
ALL MUSIC:
Classic Albums You’ve Never Heard Of No. 17 -
Romantica by Luna

The figure of the super producer rarely features on the modern alternative  scene. Some anoraks may

know who crafted Nirvana’s sound to accessibility, captured The Pixies at their finest, or worked to give

Kings of Leon a sheen of competence, but in the main guitar bands don’t give the credit to those mixing

and recording their sound. Not in the way of a Dr Dre in hip-hop, or Mark Ronson when it comes to top

But there’s one man who, despite not being in a band since he left Mercury Rev back in 1993, has done

as much to shape the modern sound as any musician. With his affinity for artists, signature expansive

techniques, ability to shape songs and play instruments and even, occasionally, co-write the

He started out producing the Rev and Flaming Lips in the early nineties, and for the past decade and a half Fridmann has found himself

increasingly in demand, helming career peaks by the likes of Low, MGMT, Sleater Kinney, Ok Go and, in 2012, a buzz record near the top of some

best of year lists; Tame Impala’s ‘Lonerism’. Along the way Fridmann also helmed a tremendous album by Wheat which previously featured in this

column, won a grammy award, and has been repeatedly referred to as “the Phil Spector of the alt-rock era”. Thankfully this is due to his production

skills, rather than a penchant for waving guns around the studio or shooting his ex-girlfriends in the face.

Back in 2002, it was Dean Wareham’s Luna who benefited from Fridmann’s magic on their sixth album, ‘Romantica’. Wareham, a New

Zealand-born Harvard graduate, had formed his first band in New York City fifteen years before. Galaxie 500 (below) would last for three

albums of swooning, Velvet Underground-inspired guitar pop, before Dean dissolved them to commence

Right from the start his new project, while still bearing the woozy, melodic, ‘dream-pop’ imprint of his

former group, would prove more accessible and hi-fi, with Wareham’s voice developing to the point

where he could actually sing, and the collective’s songwriting coming on in leaps and bounds with each

release.
From those early records, where the VU influence was made explicit by a Sterling Morrison guest spot on guitar, to the Rolling
Stone magazine-endorsed ‘Penthouse’ and 1997’s ‘Pup Tent’ with it’s terrific, Wild At Heart name-checking stand-out (‘Bobby Peru’), every Luna album is certainly worth a spin. 1999’s ‘The Days of Our Nights’ had plenty of highlights, including the peerless ‘Superfreaky Memories’ and an opiated cover of Guns N’ Roses’ ‘Sweet Child O’

Mine’, but it was three years later when Luna would, for me, reach their peak.

Which is strange, because ‘Romantica’ came out of a time of upheaval. Something happened during the hiatus which would change

Dean Wareham’s outlook on his art, and approach to music in general. Back then Luna lost a bassist, recruited a new one in Britta

Philips and, before long, the singer / guitarist was in love with his gorgeous, NYC-blonde bandmate (they would eventually marry).

through the circus of touring, promotion and recording.
In this case it simply didn’t happen. Instead, being intimately involved with his bassist inspired Wareham to produce his strongest sets of songs. There’s something pleasingly ironic about that. Where so many career defining records, from Bob Dylan to Spiritualized, rose out of a broken heart’s coruscating despair, Romantica’s back-story is very much the reverse.
And Fridmann captures it all in spectacular style, bringing muscularity to the production and arranging those swooning strings on
‘Black Champagne’, while generally serving songs given an extra dimension by the sex-kitten backing vocals of Britta. From the
record’s title, to its cover depicting some souvenir lighter brought home from an exotic Honeymoon landscape, to lyrics that are
unabashedly sentimental without ever tipping into cloying, this is a record very much in love with love.
It’s also a profoundly epicurean LP, diving into the pleasures of the flesh, and not simply in a sexual way, even though, when
Wareham’s nursery rhyme delivery intones: “I want you forever, forever tonight; pulling your hair and holding you tight” we know
exactly what’s on his mind. Precious metals are everywhere; gold and silver and rubies, combined with a veritable smorgasbord of
food references, from orange peel to ‘salt and pepper squid’, wine and ginger and tangerines, noodles with champagne. On the closing title track, Wareham even invokes

a gastronomic metaphor, singing: “I’m in a jam, you’re in a pickle, we’re in a stew…”

When I saw Luna tour ‘Romantica’ in Camden Dingwalls with DJ Nutsac a decade ago, they opened with ‘1995’ from this record.

It's an atypical blast of indie rock, and features here halfway through. Whether this was an attempt to get the audience’s

attention, or just to shake the cobwebs off themselves (Wareham’s bands tend to look entirely frazzled when they take the

stage) I’m not sure. As much fun as noisy guitars and Wareham’s more scathing lyrics can be (“Talking to your friend was like

talking to a shoe, his hair is stupid blond and his eyes are stupid blue”) ‘1995’ hardly represents where their sound was at.

More apt is opener ‘Lovedust’, setting the tone with its shuffling beat, oozing guitars and Wareham’s lovelorn croon, relaying the

experience of being disorientated and lovestruck with typical self-deprecation: “I’m bad with faces, and worse with names… I’m

the one who’s all caught up, blinded by lovedust.”
Many of the other songs are similarly soothing, warm and hospitable, the unabashed romanticism of Wareham’s words supported by guitarist Sean Eden’s hazy chords and the sultry vocals of Britta, reaching a peak as two lovers become separated by distance in ‘Mermaid Eyes’. This duet swells up with Dean calling: “siren-soft beauty, where are you now? I’m cryin’ for you, you’re cryin’ for me, from station to station to station.”
Then there’s the stand-out track, the most radio-friendly thing here. ‘Black Postcards’ continues this separation theme, and the song would lend
its title to that volume of indie-rock memoirs Wareham later published. Here a chiming riff powers one thrilling tune, Lee Wall’s propulsive drums
kicking in halfway through, underpinning some of Wareham’s funniest lyrics (“If I had to do it all again, I wouldn’t”).
Elsewhere the vocals are distorted, as on ‘Weird and Woozy’, or occasionally the Spectorish Wall of Sound rises up, as with ‘Renee Is Crying’.
Occasionally the mood is regretful, like on ‘Rememories’ (“I love you, but I’m sending you away”) but more often the emotions here are
straightforward and universal: “Your eyes make me weak, and your lips make me dizzy” (on, er, ‘Dizzy’) or “I could look at your face, for oodles
and oodles”, or “I’m in the mood for you”.

Still, if you’re not into all this wussiness, the three-second guitar solo at the end of ‘1995’ is hilarious.

Overall it works, because of the quality of the songs, and Fridmann’s production, and because Wareham is so obviously not faking it. Ten years

on he and Britta remain an item, even if, after this album, Luna yielded just one more record and an EP; the terrific ‘Close Cover Before

Striking’. This would feature their finest four minutes in ‘Astronaut’, a song revisited on 2004’s low-key, valedictory ‘Rendezvous’.

Since the end of Luna, Dean has moved on to soundtracks, scoring Noam Baumbach’s ‘The Squid and The

with Britta, wherein her hushed femininity perfectly complements his clear-voiced yearning. Long may they

collaborate, both personally and professionally.
Meanwhile, Dave Fridmann is currently working on the solo record of that bloke who used to be in Crowded House.
‘Romantica’ is on the Beggars Banquet label and available from all the usual outlets. 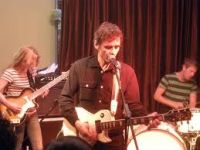 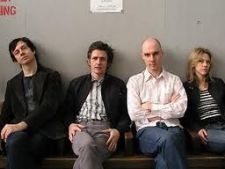 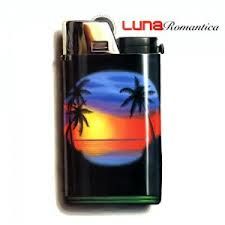