It begins with a crashing drum solo, higher in the mix than any I’d heard,

a vocalist repeats the words “Come on! Come on!” more times than feels

physically possible before pausing for breath. Then every instrument kicks

in for the chorus before they do it all over again. This is ‘Citizen Jive’, the

it represents one of the finest starts to a rock record I’ve ever encountered.

I first happened upon Latimer entirely by accident. They were opening for the excellent, Pixies-inspired Anglo-

American act Done Lying Down at Exeter’s tiny Cavern Club back in the mid-nineties, when I was at university

in Devon. I knew absolutely nothing about them then, this was before Internet search engines gave access to

any band’s history via the typing of their name, and if an act weren’t played by Steve Lamacq or Mark Radcliffe I

didn’t get to hear about them. But pretty soon after Rich Fravel (guitar), Dylan Cotton (bass/vocals) and Geoff

awesome force, singing and yelling in tandem, it became clear we were in the presence of something special.

They’d only released one album at the time (‘LP Title’ – you crazy guys!) and a single EP (‘World’s

Portable’), but the audience rushed to pick up records and merch afterwards. As a naïve teen, I didn’t

realise back then how rare it was for an unknown support act to produce that kind of effect. This was after

their drummer (Rob Sherman) had worked up such a sweat he was down to his shorts within minutes, and

performance on video, finding ever more weird angles as they raced through a set of anthemic early-career

highlights like ‘Stabs The Reason’ and the brilliantly-titled ‘Chicken The Goon’.

While effective enough to give you a flavour of what Latimer were all about,

‘LP Title’ didn’t really replicate the experience of seeing them live; the

production and energy wasn’t quite there. But a couple of years later

Latimer followed up their debut with ‘Live From Sour City’, also on the bassist
from Gang of Four’s World Domination label. As the title hints, this is the record that finally manages
to convey the intensity of attending their gigs, even as the jokiness in naming records continues (this
isn’t actually a live album, although the title isn’t too misleading. ‘Live From Sour City’ does manage to
sound like a quartet of simian men in a room, making a massive and spontaneous racket while recording
the first take).
‘Sour City’s’ sleevenotes give drummer Sherman top billing and that’s only fitting when it’s his percussion powering so many of the record’s most thrilling moments. This is an explosive, drum-heavy sound that would latterly be taken on by more successful bands such as …And You Will Know Us By The Trail of Dead or The Dodos. In fact, all of Latimer spend the set playing for their lives, the arrangements sounding as if they’re perpetually on the brink of collapse. Their forty minutes runs from the succinct and catchy ‘Used Cars’ (the closest they ever got to a true pop song), to the unique ‘Motel Motel’, with its hollered vocals and apparently arbitrary guitar lines. Indeed, this latter song sounds like nothing I’ve heard, before or since, with all the messy elements somehow knitting together to make up a sound that’s more than the sum of its parts.

In fact, this is a good way to understand the entire Latimer oeuvre. This band are clearly influenced by

everything from the grunge of their time to classic rock, from lo-fi to the more extreme noise bands.

But unlike say, Lightning Bolt or Melt Banana, you could put Latimer’s music on in polite company

often failing to lock in as you would expect, playing off (or even against) one another. But the riffs are

big, the choruses catchy, and the climaxes cathartically intense without threatening to bring on an

Sometimes on ‘Classic Albums You’ve Never Heard Of….’ I might wander into fairly well covered, if

heard of that group). Yet Latimer are hardly mentioned on the web at all. The reviews that do exist

refer to their “creative guitar interplay, unique vocal melodies and thunderous bursts of noise” or “bold

Last.FM. This is a promo clip for ‘Used Cars’, set in a garage (appositely enough), and looks like it

cost about fifty bucks to make. If you want confirmation this band were as primal and hirsute as they

sound, see the singer fail to fill his vehicle up with petrol, or
witness some random majorettes dancing in a way that doesn’t match the song (inspired by
‘Lithium’ perhaps?) go and have a look. This video also features some fantastically bad
lip-synching.
Aside from the above there's little information to be found and no explanation as to why
‘Sour City’ features Latimer’s final recorded material, although I suspect part of this is the
same old story; lack of recognition, disillusionment, other commitments. Or maybe life in
general just got in the way; that same slipshod process which leads so many fine but
little-known bands to split after years of toil without reward.
And they were a fine band, even if the second half of ‘Sour City’ sees a slight drop off in quality with too many similar songs, particularly the ‘Beats Sored’ and ‘Regressing’ combo which might have benefited from being scheduled non-consecutively. Yet overall this is a record everyone into LOUD music should listen to at least once. By the closing, titular opus, Latimer have worked up such a head of steam that, as the disc finally ends, you’re left exhausted, exhilarated, maybe even slightly relieved. But keen to listen again soon, with the dial turned right up.

Whoever wrote the ‘Live From Sour City’ inlay has a nice take on this:

“Since this record was recorded loudly, please playback @ max volume. It will otherwise sound

Can’t argue with that.

‘Live From Sour City’ was available online for a few quid, plus postage and packing, the last time

I checked.
Editor's Note 12th July 2010: I've just discovered that, following Latimer's final break-up in 2001, frontman Geoff Doring died four years later at the horribly young age of 35. Take it easy Geoff (left and above, pictured at the front during the band's UK tour). You've left behind some fantastic music....
MUSIC
with Al Likilla
Home Defence UK
A Symptom of a Greater Malaise
Classic Albums You’ve Never Heard Of
No. 5 -
Live From Sour City by Latimer
ALL MUSIC: 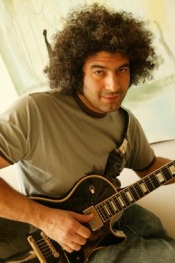 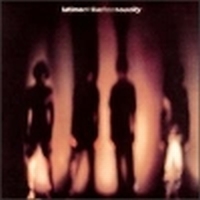 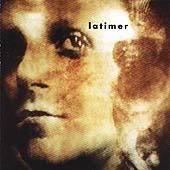 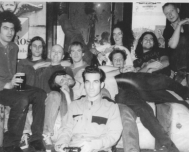