I was at a gig recently featuring some manner of guitar band from the U.S. of Stateside when a guy in the

audience shouted these words out between songs.

What I found brilliant was how his cry wasn’t obviously a heckle, or even a fan’s cheer of encouragement.

Instead, this man’s statement was an almost Catchphrase-like example of saying what you see. In fact, I

Back in the mid-nineties few bands were more American Indie Rock! than Small, a four-piece out of North

of the time, a loose movement that made underground legends of Superchunk and led others into deals with

Small’s 1993 debut ‘True Zero Hook’ (left) was recorded under the Small 23 monicker and, despite thin

production and somewhat patchy songwriting, contains several superb tracks, two of which feature on a label

sampler called ‘Alias With A Bullet’. I was first exposed to this compilation by my associate Random Granville.

more well-known likes of Yo La Tengo and American Music Club.
By the time of their sophomore effort Small were able to ditch the ‘23’ suffix and realise a more
coherent long player. But however practiced the band had become at expressing themselves,
those intervening years of constant touring (including appearances at the Reading Festival) had
taken quite a toll. On ‘Silver Gleaming Death Machine’ (named in reference to the motorbike
featured on the cover), it often sounds like dual frontmen Dave Hollinghurst and Mike Kevlan are
falling out of love with the music industry, being in a band, and sometimes the world itself.
Yet this downbeat aura fails to stifle the adrenalin-rush propulsion that characterises one of the most tuneful albums I own. SGDM opens with ‘Steal Some Candy’ which, as well as being indicative of what one correspondent called their “twin-guitar rev-it-up style of scruffy, melodic pop-punk”, is the perfect exemplar of this newly-jaded worldview, heard in the repeated hook of “steal some candy, and the world will be your friend”. Meanwhile, as the title implies, ‘Copping Chords’ is a paean to scenester disillusionment, covering the experience of watching hyped bands and understanding instantly where their musical progressions came from: “copping chords like a two-bit criminal”.

Lest I derogate SGDM as the worst kind of self-indulgent long-player, defined by past-caring

cynicism and a tiresome enervation with the business in which they operate, bear in mind Small

here created one of the most immediate records of the nineties. A sound that’s characterised by

universal emotions, memorable tunes, and moments of dark comedy, like describing a

‘There’s A Hatchet Buried Around Here Somewhere’ (yes, they’re great at titles too…)

whereupon some old wino, I suspect from a film set in the 1920s, enunciates intoxicatedly: “You

got prohibition… I got an Uncle Louie!”

Then there’s ‘Vega & Boston’, one of my desert island tracks and a classic of romantic yearning

containing the lyric “I miss your face, I miss your eyes; I missed the point entirely one more

time.” There’s no way she’s coming back to the singer here, but at least we have this song as a

by product of his heartbreak. I defy anyone to dislodge the repeated refrain of “I wonder what

you’re doing now” from their head after a listen.
In all the album lasts less than forty minutes, including a ‘bonus’ track which, in keeping with the on-edge mood of the piece, consists of a field recording that captures some kind of altercation threatening to explode into violence at any moment (“Back off! Back off!”). This late addition is fairly pointless, and there’s no explanation for it on the inlay. Indeed, in keeping with the self-effacing nature of much nineties indie, the SGDM packaging contains brief recording details and some random photographs and that’s it. I wouldn’t want to imply this long-player is perfect either, far from it. ‘B Is For Bridge’ is entirely unmemorable, while closer ‘Top Of The Hill’ ends up as a bit of a dirge. But somehow the flaws just make Small’s overall achievement
more pronounced, and you’ve got to love a band who list their influences as Circle K hot dogs
and Don DeLillo novels on their MySpace page.
One description I found on the Internet sums this album up better than I ever could, calling
SGDM “no-angst dual vocal hooks with singalong choruses, spindly melodic riffs grafted to
meaty power chords and solid drumming”. Yet critical reception to the LP at the time was
mixed, with some believing Small to have abandoned what made them unique in favour of
a glossier, more pop sound. Bloody sell-outs <shakes fist>.
Unfair, I think. To me Silver Gleaming Death Machine sounds like a natural progression from
their debut. Yet SGDM was to be Small’s last record. Soon after its issue Dave Hollinghurst moved to Brooklyn and hooked up with a number of acts from the lo-fi and anti-folk scenes, recording experimental ditties of his own over the course of the following decade. Meanwhile his former bandmates slipped back into obscurity.

But Small leave one work fully deserving of the classic status I’m about to grant it. And if further evidence

is required, I direct you to clips online of an absolutely riveting live performance in a coffee house (of all

places) during February of 1994 (link left). The band play to a room of clean-cut college boys (this was

before girls learned to embrace the guitar en masse), whose stillness isn’t down to any failings in the

music, but rather shows how enrapt those on the makeshift stage can hold an audience. American Indie

Rock! indeed.
‘Silver Gleaming Death Machine’ was available on Amazon for 51p plus postage and packing the last time I checked. 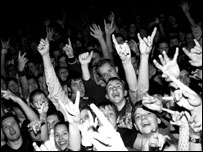 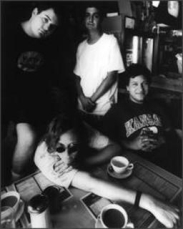