MUSIC
with Al Likilla
Home Defence UK
A Symptom of a Greater Malaise
Classic Albums You’ve Never Heard Of No. 22 -
Life'll Kill Ya by Warren Zevon
ALL MUSIC:

It’s a common phenomenon. Someone vaguely famous dies, and the attendant publicity prompts a re-evaluation of

their work. Most recently this has happened with the books of David Foster Wallace; a relatively obscure author

creating a whole new industry, ready to cash in with biographies and ‘lost’ early work that wasn’t really lost (it just

wasn’t good enough to warrant your attention when he was alive).

The same applies to the record industry. On expiring, a label instantly wants to promote the back catalogue of a

band or songwriter. It puts together collections of half-formed demos, hissy live tracks and obscure rarities no one

cared about, back when the deceased was sentient and struggling. Now we know there will be no more songs, suddenly they're a finite resource to

be exploited. And that audience who were jolted into supporting an artist by his shockingly early death, are the same ones who ignored him while

the poor bugger was out touring. Nothing makes us appreciate talent so much as when it checks out early.

Such was the case with Warren Zevon, a Californian singer-songwriter who had a hit in 1978 with ‘Excitable Boy’, the

for the next quarter century, only returning to wider consciousness with his final record, the Grammy-award winning

‘The Wind’, released in the latter stages of his fatal mesothelioma. While the recognition for this, Zevon’s second gold
record, was a fitting tribute and ‘The Wind’ unarguably contains powerful songs (as you might expect of a man who only had months to
live), it isn’t one of his finest achievements. Much of the humour and cynicism of Zevon’s best work is missing while, understandably,

his voice wasn’t at its strongest, performing under the strain of terminal cancer.

No, in true ‘High Fidelity’ tradition, I wouldn’t even put ‘The Wind’ in my top five Zevon records. Better to go back to the work really reflecting

the man’s musical talents; his ability to write a sardonic lyric, like this from ‘Desperados Under the Eaves’: “And if California slides into the

ocean, like the mystics and statistics say it will, well I predict this motel will be standing, until I pay my bill”.

Zevon’s persona for those initial LPs was an exaggerated version of himself; a kind of music biz Hunter S. Thompson, the gun-wielding,

ripped him off. For me, the best entry point to this carousing and unhinged character is 1987’s ‘Sentimental Hygiene’, an album that’s three-quarters brilliant, featuring trademark narratives like ‘Detox Mansion’ or ‘Trouble Waiting to Happen’ and a rare high point in Zevon’s patchy eighties output.
‘Sentimental Hygiene’ could easily have featured in this column as a lost classic, but Zevon’s most complete set of songs was actually
released in the first month of the new millennium. ‘Life’ll Kill Ya’ amounted to a resurrection of a kind, five years on from his previous
release, the underwhelming ‘Mutineer’. Now Zevon returned with a crowd-upsetting concept album on illness, mortality and death, its
inlay depicting medieval penitents and skeleton armies.

Warren had fallen out of fashion during his years in the wilderness, all but forgotten and with few in the

industry backing his resurgence. While Zevon could always get regular gigs to keep a roof over his

head, only the man’s closest friends were interested in the music he was putting together in the

late-nineties, compositions that turned out to be the strongest of his career.

the funding to get Zevon’s old friend Jorge Calderon on bass and hire Winston Watson, a man who had previously drummed for Bob Dylan

and the B-52s.
These three men, along with the occasional guest, worked acoustically in the main, a relaxed environment recording what the singer called “a folk album.. not a big rock guitar album.” But it still storms out of the traps with ‘I Was In The House When The House Burned Down’, a deranged testimony featuring explosive harmonica and a thumping drumbeat, Zevon announcing the return of his perennial character; hedonistic and philandering (“I had the shit ‘til it all got
smoked, I kept the promise ‘til the vow got broke”). There’s desperate, falsetto edge to his voice as Zevon sees himself walking
alongside Jesus: “I met the man with the thorny crown, I helped him carry his cross through town.”
After this exhilarating start the title track is more representative, dominated as it is by offbeat yet melodic piano, like Elton John played
by a drunken genius. ‘Life’ll Kill Ya’ muses witheringly on the universal leveller (“Maybe you’ll go to heaven, see Uncle Al and Uncle
Lou, maybe you’ll be reincarnated, maybe that stuff’s true”), Zevon banging out notes as if playing in the midst of paroxysm.

The tempo is upped for third track ‘Porcelain Monkey’, a catchy meditation on Elvis Presley’s inevitable downfall, his

latter-day slide into irrelevance. This is a state of affairs the once-feted Zevon sympathised with from the sidelines

(“He was an accident waiting to happen, most accidents happen at home”) and the somewhat obscure title is

apparently inspired by televised footage Zevon and Calderon watched of The King’s TV room, where he spent his

final days alongside a “weird, white-looking monkey with black eyes” squatting on the coffee table, a nefarious,

To Zevon the strange sight is emblematic of Elvis’ downfall, the King reduced to a claustrophobic life of geegaws and over-consumption. ‘Porcelain

Monkey’ sums up Presley’s final years with the lyric: “Left behind by the latest trends, eating fried chicken with his regicidal friends.”
From a shark-eyed tribute to an epic of yearning and regret. ‘For My Next Trick I’ll Need A Volunteer’ brings Chuck Prophet’s guitar in
to complement Zevon on piano, both backing a poignant lyric that invokes the metaphor of stage magic to tell of a man who destroys
relationships with his behaviour (“I can saw a woman in two, but you won’t want to look in the box when I do”). The narrator’s remorse
could apply to many of this world’s ‘magicians’, plunged into solitude by dishonesty and romantic mistakes. Over one of his most
memorable tunes, Zevon intones: “It’s lonely up here, when the tricks have been played… And there’s no magic spell, for a broken
heart.”
‘I’ll Slow You Down’ takes the guilt further, someone giving up on their ambitious partner, passive-aggressively claiming: “I’ll just throw
your schedule off, so you get going if you’re so inclined.” It’s a tale of dysfunction, Zevon’s settled croon at odds with his tempestuous
affair, feeling the effects of age in the company of a confused younger lover (“You know I hate it when you put your hand inside my head, and switch all my priorities around”). But the older man is a skilled manipulator, telling her to “go on” in a way that can only make a girl feel bad when she does.

Side one ends with ‘Hostage-O’, a mournful ballad that likens relationships to the plight of the kidnapped, those indignities humans will suffer

to avoid being alone, willing to undergo torture and abasement, abduction and imprisonment; all within the strictures of monogamy. Just a

picked guitar motif and Zevon’s plaintive voice here as he sings: “You can treat me like a dog, If you make me feel what others feel.”

But pairing up forever is also a two-person cult, somewhere to belong at a cost to individuality. That’s the thesis of ‘Dirty Little Religion’, a

pacey hoedown exploring the ‘trap’ we set for a husband or wife with our unique type of ‘loving’. We keep them sequestered away, like a

Church that refuses to let go until its teachings have seeped under your skin. There’s religious imagery and harmonica to accompany Zevon’s

jaunty boast; a charismatic leader full of confidence calling out: “Can I get an amen from the choir?”
A cover version follows, and whereas Stevie Winwood’s optimistic original is suffused with the possibility of turning things around, Zevon’s take on ‘Back In The High Life Again’ is ironic, the lament of a lost soul, a bare bones version performed by someone maintaining a delusion that the good times can return: “All the doors that closed one time will open once again.”
The sparse, acoustic atmosphere continues into the blackly humorous ‘My Shit’s Fucked Up’, a dialogue between a sufferer of
multiple ailments, the legacy of his hedonistic lifetime, and a somewhat unprofessional doctor who urges him to change: “The
shit that used to work – it won’t work now”. Once again, Zevon’s message isn’t what we want to hear necessarily, reminding us
no one can prevent their health and life falling apart: “The rich folks suffer like the rest of us, it’ll happen to you.”
From here ‘Fistful of Rain’ brings in backing vocalists to harmonise about the American dream, unfettered capitalism turning to a
nightmare for those who fail to benefit from the supposed ‘trickle down’ of wealth. Prosperity dies for civilisations as surely as it
leaves us men and women, all fallen on hard times: “When diamonds turn back into coal, Grab a hold, children, grab a hold.”
The full band returns for this paradoxically inspiring ditty about the illusion of money, while Jim Ryan adds mandolin on ‘Ourselves to Know’, the meandering tale of an eleventh century “holy ride” to Jerusalem, pilgrims seeking self-knowledge in the least compelling composition here.

But the record ends, fittingly enough, with an elegy, a highpoint; a lullaby and a plea for those we care about to remain in our

arms. This is the song that, when Zevon’s ex-wife Crystal heard it for the first time (as detailed in her fine oral history) it left her

curled up on the floor, sobbing. Indeed, ‘Don’t Let Us Get Sick’ is almost unbearably moving, an older man counting his

blessings from the hard-won wisdom of a life: “I thought of my friends, and the troubles they’ve had, to keep me from thinking

It’s a rare achievement, a gut-wrenching hymnal where the melody is as memorable as the sentiment, the testament of a

man who is: “Lucky to be here, with someone I like, who maketh my spirit to shine.” The troublemaking young Zevon is long forgotten in perhaps the apotheosis of his art, a chorus that deserves to be quoted in full:
“Don’t let us get sick, don’t let us get old, don’t let us get stupid, alright? Just make us be brave, and make us play nice, and let us be together tonight.”

The critical reception that greeted ‘Life’ll Kill Ya’ ranged from the positive to the rapturous, giving Zevon his best notices in decades. Still,

the album didn’t win any of those ‘comeback awards’ Zevon predicted. He would have to wait another three years and be freshly in the

ground for that to happen. But it did launch the final phase of Warren’s career, meaning he could afford relatively lavish productions for

It was no more than he deserved. Delving into Zevon’s body of work, which comprises a dozen LPs

and many live recordings, is an endless rewarding activity, and reveals there to be far more to him

than that man who made his ‘best’ record in the shadow of the reaper.
No, if you want a taste of what Zevon has to offer, start here, with his greatest achievement. And don’t be put off by the song titles
or the strangely inappropriate seventies pose Zevon strikes on the cover. Because ‘Life’ll Kill Ya’ is as much about life, relationships,
regret, and laughing in the face of darkness as it is about the big D.
Life’ll Kill Ya is available from all the usual outlets, physically or on digital formats. 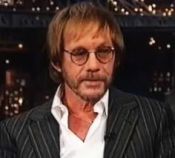 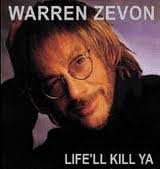 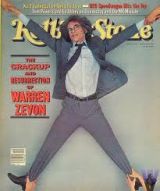