MUSIC
with Al Likilla
Home Defence UK
A Symptom of a Greater Malaise
Classic Albums You’ve Never Heard Of No. 20 -
The Body The Blood The Machine by The Thermals

Power trios seem to have gone out of fashion in recent years, rendered defunct by the rise of bedroom

producers and acoustic singer-songwriters who do everything themselves, only assembling a band to

replicate their sound live (I’m thinking of the Aussie bod from Tame Impala, or Iron and Wine’s bearded

Then come those who take the approach laid down by three-pieces throughout rock history; bands like

the Jimi Hendrix Experience or Nirvana, and minimise the template still further. The likes of The White

Stripes, Canada’s all-female Pack A.D., and the commercial rock behemoth that is The Black Keys,

do it all as a two-piece, with just guitar, drums and voice, a simple yet visceral combination up on the stage.

And yet, as these bands develop, limiting the palette can prove reductive. Even The Black Keys have added members on recent tours, filling out the

sound. Bass, in particular, can add a depth and solidity to performance, without swamping the basic ingredients that continue to exhilarate and

One group still flying the flag for a power trio approach in 2013 are Portland, Oregon’s The Thermals. Their core duo of Hutch Harris and Kathy

Foster were an item before they started making music as folk duo ‘Hutch and Kathy’ around the turn of the millennium, but in 2002 the couple

embarked on a very different approach. The trademark Thermals sound they established then is characterised by caffeinated guitarwork,

thunderous drums, the buzz of bass and lyrics that dwell on worst-case scenarios or the end of days.

For their debut, ‘More Parts Per Million’, Harris played the instruments and recorded himself with anything to

hand, resulting in a lo-fi opus that impressed Seattle’s Sub Pop enough to release it and the follow up, 2004’s

twelve-songs-in-twenty-eight-minutes blast ‘Fuckin A’.
As well as having the best title ever, ‘Fuckin A’ boasts a big, immediate sound, as produced by Death Cab For Cutie’s Chris Walla. You’ll go
a long way to find a more effective half hour, with ‘Fuckin’ A’ demonstrating the nascent obsessions of Harris, including environmental
disaster, individuals amid catastrophe, the more nationalist parts of the US identity and the manipulation of its citizens by organised religion.

Such themes would develop two years later on their third record, the thematically cohesive and musically accomplished critical hit that was

‘The Body The Blood The Machine’ (insert commas, according to taste). With Brendan Canty of Fugazi on production duties, Foster and

Harris played everything for what was described at the time as “a politically charged concept LP”, one that depicts “a young couple who must

flee a [version of the] US governed by fascist faux-Christians.”

But if the concept album er, concept, brings to mind the half-baked mysticism of progressive rock then fear not, ‘TBTBTM’ is far from

self-indulgent, and the medium through which The Thermals’ message is delivered; all power riffs, driving rhythm section and great slabs of

melody, can be enjoyed by all, whether you buy into the back-story or not.
It’s worth bearing in mind the context while enjoying these relatively straightforward pop-punk-rock thrills. Back in 2006 the
American political landscape was characterised by Dubya’s “God speaks to me” warmongering, repressive security and
Guantanamo, with some preparing for the worst; holing up alongside Bibles and weaponry, even as the rest struggled to cope with
'extreme weather events' and the perpetual threat of terrorism.
Against this backdrop, it’s no stretch to believe an ambitious cult would invoke some vengeful Old Testament God, a deity who brings
down horror on the ordinary people who disappoint him. Our heroes fear this is in store during opener ‘Here’s Your Future’; a
confrontational holler high in the mix as Harris sings of some omnipotent being that has “flooded the land and set it afire”, religious
types capitalising on human fear to “create the new master race, ‘cause we’re so pure”, a catchy sermon underpinned by loud guitars and rising dread.

‘I Might Need You To Kill’ increases the heaviosity, fundamentalists mirroring the violence of the Bible to “own the days” of unbelieving adults,

eager to “pound you with the love of Jesus”. A crashing, riff-based monster, this track builds with unnerving menace, shadowy chosen ones

dictating the behaviour and emotions of the populace, even as our heroes try to escape this repressive world or be crushed.

This second song segues immediately into ‘An Ear For Baby’, overwrought vocals and thumping drums, a hurtle of guitar fuzz to form a rallying

cry. Even as these sudden rulers inspect and demean their subjects (“strip to your underwear, it’s time for you to be cleansed”) we hear of

resistance to this conjoining of church and state; the new world order as nationwide commune, an attempt to build a country on oppressed

individuals; ‘The Body The Blood The Machine’ of the LP title.

Some will abandon the state-sanctioned pogrom and join a movement away from original sin and punishment,

never looking back in their attempt to flee. This escape heralds the catchiest tune on the record, ‘A Pillar of

Salt’ dropping a beepy guitar line into simple elements, the band at their most accessible, instruments

replicating the urgency of flight, a single so tremendous it ended up on the ‘EA Skate 3’ game soundtrack (so

Biblical subject matter isn’t a hindrance to crossover success then).
The remaining half-dozen tracks maintain a course through hummable melodies and outbreaks of feedback, even as our hero and
heroine go through the mill, confronting their Nazi-esque fate for mid-pace chant-a-long ‘Returning to the Fold’, or holding each other
and hoping for a better life, enduring “cold days and frozen nights” during ‘St Rosa and the Swallows’, a clarion call that references the
eponymous California mission village.

Later comes ‘Test Pattern’, a brooding, percussion-led hum, before the volume rises again for a chugging ‘Back To The Sea’, a

Noah-referencing inversion of evolution with humans returning to earlier forms beneath the waves, avoiding the God squad

and the horrors in its wake; gas chambers, death, and the ultimate judgment name-checked in a monstrous dirge.

Here is an epic distillation of what’s great about the whole record over the course of five hectic minutes, with overdubbed

guitars, martial drums and the ever-present hum of Foster’s bass. Harris testifies to the selfishness of religion-spouting

leaders who “need the land you’re standing on”, “tell the children when to kill”. Those “more equal” who oust the masses from

their homes, or “move you people off the planet, ‘cause Goddamn we need the fuel!”
They touch upon the rapaciousness of corporations here, mingled with the fascist state who are extracting resources from the earth,
thinking nothing of it because they know “our God is the richest”, a power that “runs on blood… [which is] easy to obtain, when you
have no shame”. It’s a chilling prediction, the impact our single-mindedness will have on future generations, where: “We’ll drain the
well, we’ll tunnel to hell, and leave the earth’s surface, for the worthless…”
After this epic conclusion ‘I Hold The Sound’ feels like an epilogue, a low-key assertion of love’s ability to help us forget, if only temporarily.
In a final respite formed of brief lines we hear three or four word statements like; “the sun is cold, the world is over” or “we can breathe, the
world is flat, the sky is round”. Maybe it’s a short-lived delusion, but this album doesn’t end on a hopeless note, only a crackle of static
and burst of white noise; the end of the world or the taking down of a transmission.

So ‘The Body The Blood The Machine’ is quite the trip, both musically and theologically. Never portentous, this record can simply

be enjoyed as fine guitar pop; the high watermark of The Thermals songwriting and a set of tunes they’ve yet to top. Indeed, the

band have suffered from the law of diminishing returns ever since (an occupational hazard with a limited musical vision), through

2009’s ‘Now We Can See’ to the more domestically focussed ‘Personal Life’ and this year’s return to familiar themes; ‘Desperate

Still, everything this group does is worth a listen. Kathy and Hutch now tour with a drummer who has accompanied them for half

a decade; adding to the compelling live presence whereby The Thermals blast through thirty-plus songs in seventy-five minutes or

less. Because if pogoing as the world ends floats your boat, you could do a lot worse than start with this album.
The Body The Blood The Machine is available from all the usual outlets, digitally or secondhand. 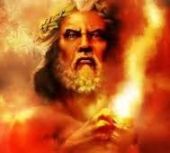 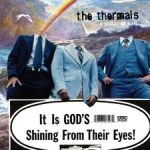 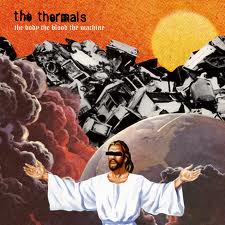