Twee has evolved into a somewhat pejorative term over the past decade or two, redolent of fey, forgettable music,

performed by girly-men in beige cardigans or girls who wear vintage dresses and lollop their tambourines in time.

Certainly, much of the Smiths-inspired janglepop of the British ‘C86’ movement hasn’t worn the test of time too

well, while modern exponents of the sound like Belle and Sebastian or Camera Obscura can often seem irritatingly

jaunty or wussy and forgettable.

But setting out to be straightforward and catchy, constructing songs with no angst or clutter, doesn’t have to be

thought of in such disparaging terms. At a time when many acts throw the kitchen sink at their ditties to distract from a lack of songwriting ability

(hello Alt-J!) I would contend that many of us need a simpler fix now and again.

For almost a decade, from 1992 to the 2001 hiatus that allowed two thirds of the band to return to their post-graduate studies (rock and roll!) few acts

made better use of the classic twee set-up than Papas Fritas. This group utilised no more than an acoustic guitar, piano or keyboard, simple drum

kit and three-way harmonies on a trio of albums, packed full of memorable melodies and upbeat lyrics, very much in the lineage of Beat Happening

and Jonathan Richman but preferable to both (at least for me).
The pick of these long players is their 1995 debut, released after singer / guitarist (the excellently named Tony Goddess), met drummer Shavika Asthana in a High School marching band in Delaware, quite possibly the least interesting US state, and a place where you couldn’t buy liquor on a Sunday as recently as 2003.

Tony and Shavika chose their band name early, settling on the translation of “french fries” while they were bored in Spanish class, and

both of these youngsters would go on to attend an Ivy League university in Massachusetts. Here they met bass player Keith Grendel and

then releasing a 7-inch single in 1994. ‘Smash This World’ was one hell of an attention-grabber and quite simply a magnificent song,

(probably).
‘Smash This World’ was also a kind of palate cleanser, a hi-fi classic a world away from (and possibly a pisstake of) all the downbeat mumbling and flannelly angst then sweeping the States in the form of Grunge. Perhaps that’s why the song received so much college radio play and this attention, combined with the momentum Papas Fritas had gained from touring full-time now they'd graduated, resulted in Chicago-based label Minty Fresh snapping them up.
The group subsequently spent six months in the basement of their shared house, painstakingly piecing together a full record on
eight-track. Somehow the trio managed to retain their trademark innocence and fresh-faced enthusiasm, even after hundreds of hours
spent labouring long and hard on this LP, the inlay of which features the three of them asleep, their heads resting on cymbals. This
wasn’t Pearl Jam we were dealing with here, let’s be honest.
That thirty five minute long debut would prove all their work was worthwhile. ‘Papas Fritas’ is as solid a ‘power-twee’ collection as any
released in the nineties, and critics greeted it like the breath of fresh air it was, marvelling at how Papas Fritas; “turn extraordinarily
fetching pop concoctions into disarmingly sophisticated and diverse small-scale charmers, with abundant skill and no evidence of
effort.”
Right from the start the songs are based around boy-girl vocals, simplistic but undeniable melodies, and very few chords. Opener ‘Guys Don’t Lie’ is a pleasant start, with its “na, na, na, na, nas” and programmed drums, Shavika intoning how “girls and boys should be as one”. Then the terrifically catchy ‘Holiday’ arrives, a tale of frustration sung by Goddess from the perspective of some repetitive day-job (“Nine to five and I’m going out of my mind, you know what I mean”). This dull melancholy can only be alleviated by the eponymous vacation, relief from “watching all the uptights” via illicit substances (“Take one of these!”), a harmonised chorus proving Goddess was

sincere in his intention to make “grown-up little kid music”.

This (comparative) bacchanalia and ebullience continues on ‘Wild Life’, the frontman with a crush on some girl downtown, imagining what

it must be like to have a girlfriend, that teenage staple from time immemorial. The guitars ramp up a notch as his mind becomes addled,

‘Passion Play’ lowers the pace, with falsetto vocals from Grendel and the sole string arrangement on the album, helping its woozy whimsy

slip down like something sweet and liquidy. Then drummer Asthana takes over singing duties for the forlorn lament of ‘TV Movies’ (“My

problems ain’t got no name...”)
‘My Revolution’ ups the pace, with its seventies-style piano line and "ba-da-das", talk of personal change and avoidance of consumerist nonsense (“Don’t buy me anything, I crave the craving.”), the protagonist moving towards the spiritual as this song progresses: “Ideas are free, why do you waste them all on me?”
What would have been side two on cassette commences with the 51 seconds of compressed joy that is ‘Kids Don’t Mind’, before the
aforementioned centrepiece ‘Smash This World’. That single is followed by a mid-pace duet in ‘Lame to Be’ and then the yelping,
propulsive ‘Possibilities’, which sounds like the soundtrack to some superhero cartoon; a raucous sing-a-long celebrating individuality
(“You’ve got a lot to learn about me!”) and punctuated by massed woos then collective laughter.
Plaintive, acoustic ditty ‘My Own Girlfriend’ segues into ‘Explain’, which builds from a low-key start to layered "woah-ohs" and burgeoning
instrumentation, supporting Asthana’s voice as she croons, inappositely: “I know, it’s only rock and roll.”
Last of all comes the chugging power-pop ‘Afterall’, an upbeat finale with its big guitar noise and Goddess hollering over the top, his voice cracking for; “My house; your home. Two words: You’re alone.” It’s a rush of a climax, bookending all Papas Fritas have packed into the preceding half hour, the album’s brevity emphasizing their way

with a melody. Why stick around for long when you can bounce in, make your point, then fly out again? ‘Papas Fritas’ the LP supports the claim

Goddess made in a contemporary interview; that music shouldn’t set people apart but instead remind them they’re alive.

So this is one tremendous debut overall, from a band with little pretension to be anything they’re not and always driven by the love of a good tune.

‘Papas Fritas’ helped the group gain support slots with the likes of the Flaming Lips, Blur, The Cardigans and Eels, while 1997’s ‘Helioself’ saw the

band continue in a chirpy vein before the largely-overlooked ‘Buildings and Grounds’ left them a little unfairly treated. In many ways this 2000

swansong is the equal of their debut, only with expanded horizons and greater musicianship.
Soon after this third LP the bassist and drummer went back to school, while Tony Goddess began to produce and co-write the work
of others, making a living out of music until the inevitable reunion tour in 2011, a series of well-received shows that included several
festival appearances.
Maybe it’s too much to hope for Papas Fritas to make another LP. That naively youthful magic the trio displayed in their twenties is
difficult to recapture when pushing forty. If not, we still have the three-dozen or so songs they released, music proving that twee
doesn’t have to be inadequate. Rather it can be cunning, charming, and compellingly addictive, in all its undeniable geekery.
Papas Fritas was available online for a couple of quid the last time I checked. 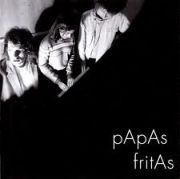