MUSIC
with Al Likilla
Home Defence UK
A Symptom of a Greater Malaise
ALL MUSIC:

People often write in, or they would if this column were widely read, to ask why I don’t feature more

British bands (aside from Chas N’ Dave, obviously). I could respond to that in a number of ways, but I

globe’s best music. That’s just the law of averages, no matter how many underground producers in the

and leaving aside matters of individual taste, a country with five or six times the population of ours (like

the US) is going to produce a greater volume of musical talent, that’s just your basic ‘math’. Still, there

exists one UK band I wouldn’t hesitate to recommend; an idiosyncratic act who celebrate their thirtieth anniversary this year, having been venerated

by pop luminaries such as John Peel (for whom they recorded a dozen sessions) and Andy Kershaw; the latter calling them: “The most authentic

English folk group since The Clash.”

Half Man Half Biscuit was born in Birkenhead on Merseyside back in 1984, a time when punk’s energy had almost
entirely dissipated and Thatcher was busy removing the industry, job opportunities and sense of community that once defined the north of
England. Up there in Scouseland football fanzine editor, sometime guitarist with Split Gut and long-term doleite Nigel Blackwell was
watching a local band featuring fellow ‘axeman’ Neil Crossley when a lifelong creative association was born.

The band’s earliest releases, including the two-hundred-thousand-selling indie no.1 album ‘Back in the

DHSS’, were primitive and cheaply made. Yet they announced a formula that would prove fruitful over the

football chants and the chart hits of the day. Combine that with comedy lyrics exploring working class

popular culture, parochial English obsessions, and the general idiocy of modern life and you’re on to a winner.

national treasure status, despite limited singing ability and being on a record label run by their mate Geoff out of his house. Not to

mention their unwillingness to perform live anywhere they can’t get home from, a reticence that saw HMHB once turn down a live

performance on ‘The Tube’ because Tranmere Rovers were playing at home that evening.
With such a consistently catchy and quotable body of work, it’s nigh-on impossible to pick favourites. I’m sure every fan; including
those men who bounce on the balls of their feet doing ‘the biscuit chug’ in a live atmosphere reminiscent of the friendliest football crowd,
will all have personal bankers. Many prefer the earliest releases, wherein references to Nerys Hughes, Subbuteo, Kendo Nagasaki and
riots in Trumpton left a mark on a whole generation, unexpectedly coming upon these hilarious lyrics of the everyday on Radio 1.
For me, Half Man Half Biscuit’s musicianship and songwriting blossomed with the arrival of drummer Carl Henry and the brilliantly-named
Ken Hancock on lead guitar in 1996. They issued a series of ever-more accomplished albums, from the wonderfully varied ‘Voyage
to the Bottom of the Road’ to 2000’s consistent ‘Trouble Over Bridgwater’, paving the way for that record I’ve chosen as the apotheosis

Named after a hostelry where men from the Liverpudlian shipbuilding industry would enjoy pints of mild or light ales, the LP comes in a

Nick Drake’; ‘Jack Charlton Reads The Book of Job’; ‘And You Will Know Us By The Trail of Bread’ by The Ducks. Musically ‘Cammell

standards; funny stories or comic couplets leaving reviewers tempted to quote the whole damn thing and be done with it.

I won’t do that, but it is worth relaying the first verse of opening track ‘The Light At The End of The Tunnel (Is The Light of An Oncoming

Train)’ in full, simply because, as with so many of their records, the first few seconds of CLSC set the tone for that which follows:
She stayed with me until, she moved to Notting Hill,
She said it was the place she needs to be
Where the cocaine is fair trade, and frequently displayed
Is the Buena Vista Social Club CD
With its strummed intro giving way to a whistleable singalong, this is a superb lament for someone lost to the bright lights and pseudy
idiots of London. It segues into ’When The Evening Sun Goes Down’, featuring guest flute from Chloe Mullett who may or may not be a
real person. Whoever it is performing, she certainly plays woodwind like an uninterested primary school pupil forced up before the
morning assembly. And for that, Chloe must be respected.
This second track comprises a cheerfully upbeat state of the nation address, from a narrator who makes light of his homicidal impulses (“I’m off to see the Bootleg Beatles, as the bootleg Mark Chapman”) before diagnosing a wide array of contemporary ills (“Café bars, idiots and pigeons – there’s far too many in this town”) and ending up naked in Tesco. Blackwell is a songwriter who often strings funny lines together to no wider purpose, and yet, as the electric guitars kick in halfway through, with Ken Hancock playing like he’s trying to asphyxiate a wild animal; thematic unity comes with a backdrop of harmonising and handclaps, the singer ending on wider questions of mortality: “Are these my ultimate pyjamas, is this my final dressing gown?”

‘San Antonio Foam Party’ is another well-produced corker, a cymbal-heavy vignette in which Blackwell diagnoses a nasty end for us

all (“It’s going to end up with the storming of a brothel in Malermo…”) before one of my favourites kicks in, a rollicking pub-rock

(“Don’t say the light show’s excellent. It makes you smell of the laboratory rather than, a fan of the band”) and expresses appalled

disgust at our national idea of fun (“Egg sandwiches on coach trips in June? I simply won’t be there”). He ends with a yelled litany, a

howl against the existential void, shaking a fist and taking a stand (“I’ll not sit backwards on the train!”). After all, how can you not

love a song that includes the lyric: “Sheepskin noseband kids in Aldershot”?

This opening quartet of tunes are toe-tappingly strong, and the quality barely drops from here on in, with the twist on Robert Johnson

that is ‘If I Had Possession Over Pancake Day’; a jaunty utopia wherein everyone can escape the constraints of convention and our

singer “could squeeze my lemon ‘til my blues went away”.
Into the spoken word strum of ‘The Referee’s Alphabet’, a novelty A-Z set against “some good bird noises there”. We’re given twenty-six sporting examples, a definition of the eponymous official’s existence, from running backwards (“a difficult skill”) to a “quiet word”, the much-loved penalty shoot-out and an unsavoury “twenty-one man brawl”. The much-loathed ‘man in black’ performs a valuable public service as we are reminded, even if his obvious achievements only amount to yelling “get back in your technical area!”
Perhaps the loudest track here, ‘She’s In Broadstairs’ rides in on soaring guitarwork to find Blackwell forlorn, unable to return the umbrella of a
girl he likes because she’s moved to Kent. Down south is a world away from the Scouse land the frontman inhabits, and his misery is
counterpointed by a widescreen tune and soaring harmonies, several minutes in which Half Man Half Biscuit come close to being a real rock band.
Soon it’s time for one ‘Tyrolean Knockabout’, a countrified fingerpicker depicting some agrarian village paradise, Blackwell plays cricket and
strolls happily down lanes with a full flask, a life that “beats skulking round the seven inch import section with him”. Yet the song soon takes
a sideways turn, with an outbreak of yodelling and a vividly-imagined revenge fantasy on D-list celebrity, Paul Ross.
‘Breaking News’ amounts to more wish-fulfillment, a fake report featuring a variety of people incarcerated for “irritating the nation”, from spitting teenagers to individuals
“who own Agas but don’t know how to use them” to Lisa Riley. Penultimate song ‘Paradise Lost (You’re the Reason Why)’ forms a slightly clunking crescendo, almost tuneless as Blackwell sticks around at some horrendous party because he’s hoping to meet Howard Marks, or possibly Ken Livingstone. But our hero doesn’t have the necessary wristbands, losing himself in a sublebrity circle of hell along with Britpop refugees talking of new projects (“a dotcom sitcom, about a hip-hop chip shop”), the Polydor Girls and Ian Brodie. Eventually he snaps and ends the night threatening to steal the lead off the roof.
We end with a heavy metal noise, distorted yelping; twenty-four seconds of sonic unpleasantness, an aural representation of a ‘Stavanger Toestub’ and there you have it, HMHB’s most accomplished and cohesive set of songs, at least in my humble opinion.

Since the release of ‘Cammell Laird Social Club’ in 2000 HMHB have produced more fine albums, notably ‘Achtung Bono’ with its

Blackwell isn’t running short of things to mock, as ‘Bad Losers on Yahoo Chess’ or ‘Took Problem Chimp to the Ideal Home Show’

illustrate. 2014 sees Half Man Half Biscuit continue their unique method of choosing venues, following a previous gig at the

redundancy party for the Telford Inland Revenue with trips to Leamington Spa and a 250-capacity barn adjoining a pub in Ilminster.

And while it’s not a little patronising to see Nigel and crew as continuing some heartwarming tradition of ‘great British eccentrics’,

their approach shows exactly why we should cherish this band. Half Man Half Biscuit always go their own way, with little thought to

any wider career or legacy, but along the way they manage to be a thorn in the side of the pompous, the conceited, the vacuous

and preening numbskulls everywhere. Here’s to their next three decades.
‘Cammell Laid Social Club’ is available from Probe Plus records in all the usual formats. 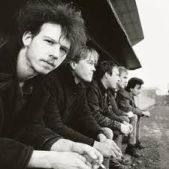 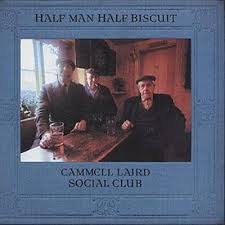 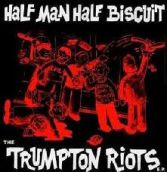 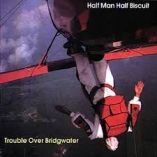 Classic Albums You’ve Never Heard Of No. 23 -
Cammell Laid Social Club by Half Man Half Biscuit