MUSIC
with Al Likilla
Home Defence UK
A Symptom of a Greater Malaise
Classic Albums You’ve Never Heard Of No. 2 -
Boo-tay by Bare Jr.
ALL MUSIC:

he’s a star in America…). The elder Bare had many hits on the Billboard Top 100

with irritating novelty songs like ‘The Jogger’, about this new jogging fad he’d

noticed, and his albums were called things like ‘Down and Dirty’ or ‘Drunk and

Crazy’. Indeed, the two generations of Bares actually received a Grammy in 1974

for ‘Daddy What If?’, making Junior an award winner at the age of eight. The lad

is pictured on the sleeve to ‘Bootay’ around this time, clad in a cowboy hat and strumming his acoustic guitar

Bare Jr’s debut for another twenty-four years. Or maybe he opted to spend his twenties

in a pleasant haze of booze and drugs rather than forging a career. Whatever, Bobby

would be thirty-two by the time that first album came out, with his band of the time; Bare

Jr. Bobby’s connections, along with this protracted gestation period, ensured this would

be an accomplished record, although few could have predicted it might contain a handful of tracks capable of

standing alongside any songwriting great you care to name.
Myself and my associate, DJ Nutsac, first encountered Bobby Bare at London’s Borderline venue in 2002, supporting the mighty Slobberbone. Bobby was there with his latter-day backing band, storming through a set of memorable pop tunes before ending earlier than they’d intended (because the headliners wanted to play for ages) with a terrific cover of ‘Best Friend’s Girl’ by The Cars. Then he flounced offstage.

at Brixton’s legendary Windmill venue a few years later. Yet finding ‘Boo-tay’ on CD for a fiver was the real prize.

This record seems like a calculated denial of Bobby’s country roots, with its cover image of the band freaking

out onstage, their lead singer denying gravity (he was never a svelte man) by leaping several feet in the air while

shredding his guitar, hinting at the sheer volume of much that was contained within.
Sonically ‘Bootay’ commences with a thirty second instrumental then segues into ‘Nothin’ Better To Do’, the record’s highpoint and most whistleable moment which, like much of the set, deals with Bobby’s lack of success in romantic matters in the most self-deprecating manner imaginable: “You dig me, more than I dig myself, and I’m in love with you, ‘cause I’ve got nothing better to do…”
From there we pass through the Glitter-band stomp of ‘You Blew Me Off’ (which would be re-recorded for the
follow up; 2000’s more heavily glam-rock ‘Brainwasher’, and ultimately gain Radio 1 airplay). Then comes
character study ‘Patty McBride’, relaying the tale of the eponymous heroine, a wildly talented and heavily
screwed-up musician from Tennessee. Still later we have the hook-filled teenage romance of ‘Give Nothing
Away’ and then ‘Naked Albino’, a masterful piece of image-making whereby Bobby strips himself even more
emotionally Bare (geddit?) than usual, feeling “like a naked albino, dancing in the sun”; because “purple
without red is how I feel.”
In less gifted hands it could all collapse into whiny petulance, particularly when the record ends with melodic temper tantrum ‘Why Won’t You Love Me?’, but Bobby knows how to keep his songs winning and fun. The man is addictive company, even if most of us would decide while listening that we’d rather not be him.

But the album doesn’t really end there. Instead ‘Boo-tay’ concludes with one of the finest hidden tracks in

pop, a song that starts with a disgruntled voicemail from Bobby’s ex, telling him she’s had enough of his

Predictably, this monologue then morphs into a song he’s written for her, at which point you have to admire

the man’s chutzpah. Plenty of musicians have received phone messages from lovers, ragging them out for behaving badly, but I don’t know of any who have mixed said message into a record for the world to hear. Yet that’s in keeping with a man self-aware enough to write a lyric like: “I just fish for sympathy, for any reason pitifully” or: “Two strong arms to wrap around I got ‘em, If I only knew how to use ‘em, without crushing someone…”
The critical response to what was known Stateside as “a country-rock debut” seems to have been universally
positive, with Bare’s “irreverent charm… infectious energy and effortless wit” all praised. The record got him
noticed, but then so did the family name, and arguably, Bob wasn’t enough of a careerist to capitalise on either.
Instead he made ‘Brainwasher’ then broke up Bare Jr. and released a couple of records with a new backing
group (The Young Criminals’ Starvation League), songs that saw his gaze turn outward, telling tales of ‘The
Monk at the Disco’ and a ‘Flat-Chested Girl From Maynardville’.

As he grew into middle age Bobby Bare Jr. came back to his country heritage, returning to Nashville and producing

his dad’s most recent album (the elder Bare still touring well into his seventies - his son clearly didn’t inherit that
gene). Bobby knows a lot of talented people, having worked with alt-music luminaries like The Silver Jews, My

Morning Jacket and Frank Black from The Pixies. Indeed, the latter’s ‘Where Is My Mind?’ is covered in a country

which, as you might expect, is slapdash and patchy, but still has its moments of inspiration.
Since then there has been an E.P. of soft-rock covers (including Bread, everybody loves Bread) and nowt else. But Bobby’s a family man now in his forties, and the old lack of productivity thanks to hell-raising and substance abuse has likely given way to responsibility and the school run.
One listen to ‘Boo-tay’ though, and you’re returned to his old world. It's a place that houses an
immeasurably talented but majorly confused twentysomething, full of self-loathing but hilarious about
it, able to knock out classic tunes but unable to pin down what women want from him. It’s a great
record, one that stands the test of time perfectly.
‘Boo-tay’ is currently available, used, on Amazon for 85p (plus £1.21 shipping) although there’s only
one at that price so you might want to get in there quick. 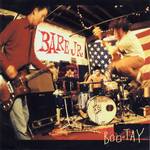