Home Defence UK
A Symptom of a Greater Malaise
MUSUC
with Al Likilla
ALL MUSIC:
Classic Albums You’ve Never Heard Of No. 12 -
Roads, Bridges and Ruins by Nothington

incessant moron karaoke that makes decent people homicidal), is the inability of us Brits to produce

Maybe it’s a cultural thing. Over here working people spend more of their time in pubs than bars, choose

snooker halls over ten pin bowling, are more into the Beatles-isms of Oasis than The Boss. In fact, our only advocate for Springsteen’s legacy in

recent years has been Badly Drawn Boy, a man with a tea cosy on his head who rocks about as hard as a supply teacher at the year eleven disco.

Then came the Arctic Monkeys who, despite Josh Homme-produced attempts at heaviosity, will always be accessible guitar-pop. Or Muse, who

would like to be Queen but are just bad, regressive prog. Astonishingly bad. And prog.

What we do possess is a great tradition of loud music; of heavy metal, punk, hardcore and noise. But we can’t seem to

produce bands like The Gaslight Anthem, Marah or The Hold Steady; lads who take inspiration from everything Bruce has

been doing for decades, pushing his committed, heart-on-sleeve style into new and interesting directions. These American

‘nu-metal’, ‘emo’ and ‘Guns N’ Roses’.
Another in this lineage are Nothington, a band I first noted when they were deemed a ‘best rock act of 2009’ by Magnet, a terrific little magazine that
has recently bucked the received wisdom about our future being on-screen and re-launched as a physical publication
(check magnetmagazine.com for more). In our current, sci-fi future-world, where all of history’s music is immediately accessible, there can be no excuse for failing to explore something that catches your ear (or eye). With Nothington it only took a listen or two before I understood these boys were on to something very good.

never made a ripple here but seem to have been pretty successful in the States. Around the time of their second and final album,

2004’s ‘The Definitive Act’, Jay Northington joined the group on guitar. When Tsunami Bomb dissolved the following year he and

Lindemann began demoing some of their own songs with Northington taking over on vocals.

And what a revelation he proved to be. Jay Northington’s gravel-voiced holler, often descending to a gruff croon, is a powerful

instrument in the tradition of Tom Waits or Kurt Cobain, and it takes their music to a whole new level. Once the demos were up

online the pair were joined by second guitarist Chris Mutalich (who used to be in ‘Enemy You’; again, no idea). Chris would take the

lead on a few songs with his contrasting “classic, snotty, punk vocals”.
With bassist Tony Teixeira providing backing vocals their line-up was complete, and Nothington would play on their frontman’s
surname for their evocative monicker, redolent of some isolated town in the middle of Buttfuck, Nowhere. Nothington’s first
album ‘All In’ was released in 2007 and variously described as ‘country-infused punk rock’ and, erm, a ‘cow punk powerhouse’.
This debut effort is worth your attention even if, by opening with the superb ‘Where I Stand’, the rest of this first set can’t help
but sound a little anti-climactic by comparison.
Two years of incessant touring followed, leaving the band a tighter, more powerful unit. Their songwriting came on too, as
sophomore effort ‘Roads, Bridges and Ruins’ would prove. Nothington’s full-throttle sound and what Magnet calls “a kung-fu grip on melody” were now matched by lyrics depicting people in extreme situations, the emotions that come with life-changing moments. These lost heroes were trying not to fall apart under pressure, to cope with

the yearning and regret, their poor decisions leading to some Godforsaken place with no clear way out.

Opener ‘A Mistake’ is a three-minute distillation of all that’s great about the record, barrelling along at a breakneck pace as

Jay cries: “I wish I could have foreseen her decline”. The next couple of songs are equally powerful, the singer full of yearning

and sincerity and unsure of his place in the world, hollering; “Oh God I think I’m for sale” or “[I] traded everything for nothing.”

Track four, the ominously-titled ‘Not Looking Down’, is easily the best thing second vocalist Mutalich has sung for this band.

chorus of; “I see graffiti in the bathroom stalls; last call, last call, last call…”
Next up, ‘Stop Screaming’ is the closest ‘Roads, Bridges & Ruins’ gets to a power ballad, even if it works best up loud. Fuzzed-up, wall of sound guitars combine with martial drums as Northington sketches a protagonist out of his depth, “capsized, sinking, drowning in secrets”. The watery imagery continues in ‘The Ocean’ where the two singers exchange lines, something that doesn’t entirely work (their contrasting vocals aren’t really meant to blend), but the sheer thumping power of the hook propels us through, Northington intoning; “your traditions are fuel to burn”.
By this point the record has already been a wild ride, but somehow Nothington find an extra gear, a new level of intensity for
‘This Conversation Ends’, followed by Mutalich’s second vocal performance of the set, the less-memorable ‘Meant To Be’
featuring the clunkiest lyric here (“I fell asleep there on my couch, shut off the lights and then passed out, while cutting
off my ears”).
But then, tucked away on track nine, comes what might be the finest tune here and certainly my favourite, ‘Best For Me’.
Here the singer searches his conscience as a relationship ends, thrilling music layering on the pathos above lines of sorrow
(“It’s not enough, to say that you’ll be mine”).
They end with ‘Sleep Tight’, a call for redemption and admission that everything must change (“As the tide turns, eventually
I’ll concede my regret”) set to a thumping beat and intermittent distortion, a song that concludes with rare optimism as the singer tells us; “it’s not the end...”

And of course it isn’t, not for this band, but it does mark the finale of a thrilling record, succinct and adrenalin-fuelled,

Purple Turtle early in 2010 (due to obscurity, at present Nothington only play the tiniest venues when they come to the

UK). The gig didn’t disappoint, two guitarists and a bass player lined up at the front of the stage, harmonising on the

choruses and adding “woah!”s. As on record, Nothington were forceful without being overblown, sincere but not cloying,

undeniably powerful as they rocked harder than any other act I saw that year. If you get the chance do check them out

live, because packed bars and pub backrooms are Nothington’s natural habitat, and once on-stage they’re capable of

bringing the rafters down (not literally).

Unprecedentedly for this column, Nothington are a fairly new band and so their details, music, tour dates etc are available

via the usual websites. As of Autumn 2011 Nothington’s Facebook page was reporting the band were partway through 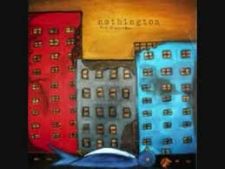 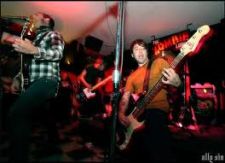 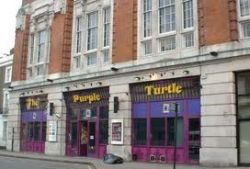