The Olympics were supposed to be all about inclusivity. Every man and his dog (Union) Jacked-Up to

the nines, bellowing along to Hey Jude and acting giddy doing the MoBot. We were all members of the

spilled out the sides.

Everybody played ball. Well, nearly everybody. Of course, there were the petty refusals of the Scottish and Northern Irish

Football Associations to sanction ‘their’ players to perform for the Team GB soccer team. But this was a minor blip. And what

the games have left us with is a legacy of togetherness. The idea that no man will be left behind. Now we’ve all Jacked-Off

until we’re spent and lolling in that post-coital glow, sparking up our ciggies and perhaps reaching for a quick bite to eat (a

the air of happy-clappiness which abounded. Well then, my son, you were to be excluded. An outcast.
Shit-Stained, Skidmarky Legacy
And now the sunny legacy of the games is about to become more cloudy. Paul the Weatherman says there’s a cold front
coming, and the news that Yorkshire - home of puddings, Dracula (sort of), the Bronte sisters and Don Revie’s Dirty Leeds United
FC – has now decided to begin the process of devolution from the rest of Team GB, in a move which has angered Alex Salmond
of the Scottish Nationalists who wanted to be first and has sent a chill running down all right-thinking Team GBers' spines.
Of course, vision is always 20:20 with hindsight. We should have seen this coming. When the People’s Republic of Yorkshire
placed twelfth in the medals table at the Olympics, ahead of Spain, Brazil and South Africa, it provided more than just a talking
point, or a momentary flare of regional pride. It meant the first steps on what is now being seen as the defenestration of Yorkshire
from the rest of the country. Or the other way round. Or something.

of the Roses. And honest Tykes have always had strong suspicions of outsiders - take the Yorkshire cricket team who, until

very recently, would not allow anyone born outside spitting distance of Headingley Stadium to play for them - and especially

anyone carrying a whiff of big London about them, which made the Yorkie’s performance at the games – a fare the well show –

all the more remarkable. And symbolic.

And so, Team GB is threatened with a schism from within. And the cracks have appeared in one of the
unlikeliest… and yet likeliest of all places. HDUK sent our intrepid reporter to Yorkshire to check out the latest news, which will soon be
International News if the not north western county’s policy wallahs have their way.
So What’s In tut News Cross tut Border in Yaaarkshire?
Sheffield – Soon to be renamed Jessica Ennisland, this south Yorkshire constituency has announced that, as soon as Yorkshire becomes
self-governing, Deputy PM and all-round disappointment Nick Clegg will be ceremonially dragged about the streets of the city behind a pony
and trap until he reaches the university, where stocks will be erected. Once deposited in the stocks, Cleggy will be pelted with rotten tomatoes,
shat on from a great height, and then generally ignored. A fate which is not too dissimilar to his current societal role.

Leeds – The once all powerful capital of the Yorkshire north. AKA. Money City. Once the Tykes take control, a ban on all ‘Leeds

haircuts’, the three-in-one, Neymar-trims, will be the first in a series of swingeing cuts (which also include closing down the branch of

heard of Waitrose. Also to be binned: the Victoria Quarter, people who go into the Leeds City Markets because they saw it on a cooking

programme on the telly, and Harvey Nichols.

Hull – A great big, Game of Thrones-style wall will be built around Hull. Mainly to

keep the locals in.
General Yorkshire Stereotype Towns – Special ‘Games’ Lanes for anyone travelling into market in a tractor, a
downhill-bathtub or a rag and bone cart.
And finally… Wakefield: The Essex Lion? Pffft. Yorkshire has its own great white shark which many have
caught sight of cruising up and down the Leeds-Liverpool canal recently.
Wakefield plasterer Coalface Hepworthgallery spotted the Jaws-a-like seafaring super-fish on his way back from a spot of dogging in a canal-side car park. Said Coalface: "I were just walkin dahnt canal baht hat and mindin me own business when I sees this dock off fin like rogerin out of the watter. So like any normal male what I did was I picked up a stone and I lobbed it right into tut watter so it would skim up like and it it in fin." He stopped to pat his whippet then continued: "But you wouldn’t credit what appened next. Or appen you would. Appen either way like. Pin back your lugholes and let me tells you."
"Me stone it it in fin and it like reared up out of the watter like Jaws. All criss packets an cans of pop stuck on its fangs and that. And the smell. By heckerslike, the smell. It were like hell had opened up its bowels like and taken a massive fishy crap right on me phizog."
"So I did the obvious, like. I scarpered like there wus no tomorrow and then came back with me camera. Snapped a shot of the beast much farther up stream, past a couple of locks where it thought it could hideaway from me."

circling in mucky water and of toothy grins and, in particular, of the shark’s eyes, as dead as David ‘Diddy’ Cameron’s.

West Yorkshire Police advised all residents of Wakefield to remain (her) indoors.

A Load of Cock

However, when HDUK spoke to Roundhay Cummerbund, meerkats manager at Leeds’ Tropical World, the possibility that there

might actually be a shark was met with a swift rebuttal: "Look son," said Cummerbund, "I don’t know who’s set thee up for this

lark, but they’s having you on they is. What have they asked you to do next? Go in tut DItutY store an ask for a ‘Long Stand’,

or intut B tut And Q an ask for some ‘striped paint’." He shook his flat-capped head, slowly, mournfully. "That int a shark, son.

Or else, if it is, does it have opposable thumbs? Legs? How else would thee explain it getting through the locks on tut canal?"
A salient question, and a symbolic one too, for this young, whippersnapper People’s Republic to consider when they are cut from the umbilical cord.
Think on. 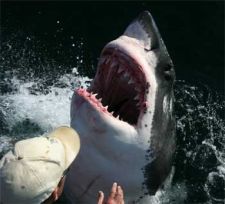 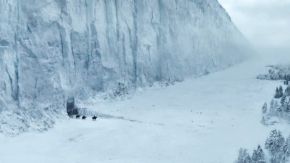 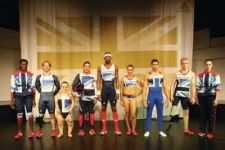 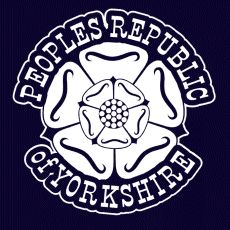 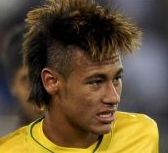