The Halfaya oilfield in Iraq, where today a

ExxonMobil and one token Chinese

organisation have finally received the
opportunity to take the 2004 invasion of Iraq to its logical conclusion,
signing thirty year contracts to enable unlimited drilling across the world’s richest oil fields. With a single flourish of one bigwig’s pencil, these multinationals will ensure that billions of barrels of sticky fluid lying under this war-torn country can contribute to the

profit margins of Western corporations for decades to come, a state of affairs that shareholders and CEOs alike

agree, more than makes up for the thousands of lives lost deposing Saddam.

“All that work and planning, all those dead American troops, it was worth it!” Senator Spas Peabag told HDUK’s

undercover investigator after we plied him with cognac in a Green Zone sports bar. “Of course, the conventional

media can’t be allowed to report on these deals, that would make me look bad. But it’s great for the US

economy. The second round of bidding on this Godforsaken country is over at last, and the oil companies whose

boards I sit on have done extremely well. If we hadn’t invested so much time, energy, and eminently disposable

life overthrowing Mr. Hussein, he would have just carried on ratifying energy contracts with the Russians and

French. And that’s no good to anyone.”
This resource grab happens against a backdrop of complaints from disillusioned Iraqis who, up until they got all vocal and uppity, held important positions in the transitional government. Many claim via al-Jazeera that the recent moves will “squander our motherland’s natural riches” and “put the Iraqi economy in chains for generations”. Fortunately such dissenting voices have not made their way into the international media, the speakers remaining on the fringes, condemned
as native dissidents and shouty preachers, unable to effect any real change.
Their concerns come in the aftermath of the 2003 invasion by coalition troops, a military
operation that involved blowing the hell out of every single building in Baghdad apart from
the oil ministry, a key part of coalition plans from the start. Once inside the city $20 billion
dollars in oil revenues were immediately ‘bagsied’ from the newly-conquered country for the
US and allies to spend as they wished, and this was earmarked to cover the building of the
US-run ‘Emerald City’ and its many Burger Kings, along with the flying in of French chefs,
manicurists and hair dressers to tend to the higher-ups. Sadly, much of the money wasn’t
so well spent.

Indeed, while grunts on the ground were

busy failing to stabilise the region and

having their limbs blown off by IEDs, the interim government led by suited men

parachuted in by Washington redrew the constitution to allow multinationals

unlimited access (left). Businesses that had been desperate to get their hands on the

together and cackling. Soon after the military ‘victory’ it was made legal for foreign

conglomerates to own 100% of Iraqi companies, with no limits set on the money that

could be extracted from this desolate nation. Meanwhile when asked if there were

any moral issues around such an approach,  everyone on the US side, just hummed

to themselves and pretended what had gone on was both normal and inevitable.
Still, it wasn’t until late 2009 that ten major oil fields in Iraq came up for auction, with forty-five of the favoured multinationals bidding on them like fevered gamblers at a cockfight, all attempting to gain responsibility for the extraction and export of a predicted six million barrels a day by 2017.
Across the giant Majnoon oilfield, the third largest reserve in the world, a consortium led by Shell was first to be successful. This organization’s CEO, Tyrone Eagleburger, kindly consented to give Home Defence a tour of the area.

“That pipeline will be pumping away next month if Halliburton can keep the terrorists out.” Intoned Mr. Eagleburger while fluttering his hand in the direction of some newly-erected Derricks. “It’s a wonderful system here; our brave white trash and ethnically diverse army gets us in, the American public pays $30 billion toward reconstruction, we give it a few years so as not to disrespect the 3,000 American dead, then we get our hands seriously oily! Honestly, you wouldn’t believe how much I get paid.”
Mr. Eagleburger then paused to shudder orgasmically as we passed some more gleaming machinery. “Personally, I sit on the newly-formed ‘Federal Oil & Gas Council’ which was set up to get locals involved and shut other people up. But we only deal with Iraqi officials who know the score. Indigenous ragheads need to understand we’re going to ransack this country for valuable spoils whether they like it or not. It’s my way or the highway.”
At this point Mr. Eagleburger removed his clothes, yelled “Wahey!” and dived
headfirst into a nearby pool of so-called ‘black gold’, spending long minutes writhing
in the inky substance like some kind of flabby porpoise.
Having spoken solely with the richest portion of those affected, Home Defence
endeavoured to contact a few men on the ground, troops who seemed to have no
real idea what was happening and were just hoping to finish their tour of duty alive.
HDUK subsequently attempted to find someone who wasn’t in favour of taking
countries by force and sucking them dry at a massive human cost. Unfortunately
few of the 4.6 million Iraqis who had been displaced by recent events could find time
to talk, what with scraping out a horrible existence and praying for Allah to “rain fire”
on the Americans. Additionally relatives of the 150,000 killed during US air strikes and land attacks seemed a little too hostile for us to approach.

And so Home Defence returned to England, dropping by the Macclesfield household of one Mary White on

our way. Over tea, served before framed photos of her only son David who was shot dead by an Iraqi

insurgent, we discussed the background to her loss. The killer of Mrs. White’s son was eventually found to

have been sacked from his job in Saddam’s army after the former dictator was deposed, the anger he felt

at no longer being able to provide for his family or keep them safe assumed to be his motive.

We asked Mary whether she was able to see the bigger picture; how her sacrifice and that of her son

made massive amounts of oil and money available to some of the most important first-worlders, a situation

that was likely to continue for many years to come. Unfortunately all talk of rising share prices at Sinopec

and Chevron was soon drowned out by the sound of her weeping.
INTERNATIONAL NEWS
with Al Likilla
Home Defence UK
A Symptom of a Greater Malaise
Iraq War Finally
Bears Rich,
Oleaginous Fruit
25/04/10
ALL INTERNATIONAL NEWS: 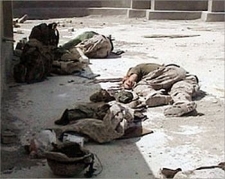 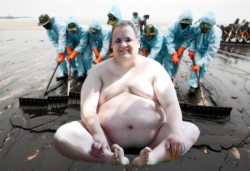 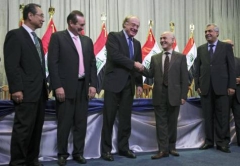 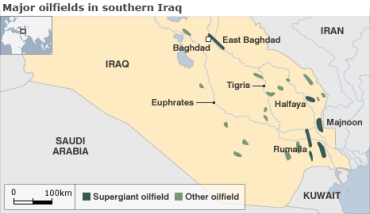 Some of the many US 'economic heroes'.
Tyrone Eagleburger enjoys the oily riches.
1