The aftermath of the latest European Union summit to help the financially destitute continent and save its single currency, and a discussion that

started promisingly has soon degenerated into harsh words, recriminations, and the threat of military action. German Chancellor Angela Merkel and French Prime Minister Nicholas Sarkozy (left), were meant to be working together to deal with Greece defaulting on half its debt, while discussing how to refinance other

countries that turn out to be screwed including Spain and Italy. But when no agreement was reached around this financing or overall

involved. But Angela made the point that they hadn’t asked China, and the money Sarkozy was depending on might not actually exist.

She insisted the stronger Eurozone countries should find it all themselves. Then the Frenchman got red-faced and tried to interrupt

Merkel when she started talking about ‘credible ways of reducing the debt’.”
“Angela said what is needed now is to realise and entrench a plausible rescue package, while Sarkozy was muttering bollocks, and
how am I supposed to get re-elected now? under his breath. The next thing I know he’s stormed out and Merkel’s blown her top. She
starts shouting about how fed up she is of not being listened to, and since hers was the only country with any fricking money.
everyone should just shut up and do what she said or face the consequences.”
“Well, none of us much liked the sound of that and sure enough, the next thing we know German troops are heading into Athens,
Madrid, and Paris to enforce austerity measures directly, backed by a statement that talks of a new rule of law and the triumph
of Merkel’s will.”

“It all happened so quickly.” A shocked Mr. Burbly recalls. “Many didn’t have the time to flee.”

The flashpoint came between two opposing groups, one in favour of a single European Fiscal Regime and the other against, but it

been under huge pressure because everyone basically expects her to sort out the financial crisis by herself, was swiftly transformed

into an iron-hearted warmonger and self-styled ‘Lady Fuhrer’. The German Chancellor has now told the national press she is happy

to send the army anywhere governments are being annoying, just to get the more toubled nations to do what she says and shut the

hell up about it.
In response, comedy onion-chomping mini-man Sarkozy has abandoned his lovely, seven-foot wife, and is rumoured to be hiding out under a trap door somewhere in the Dordogne until the trouble ens. Meanwhile, all across France, citizens have sought asylum from the incoming German troops as others have begun to shop their neighbours and a few are reportedly even trying to form a kind of resistance group.
Back in Britain David Cameron is trying hard to ignore the significance of this conflict as his government has enough problems, but
this has proved difficult. Every time a Tory Backbencher tells the P.M. “this is what comes of pro-European policies”, Cameron
sticks his fingers in his ears, but this gesture isn’t enough to shut the dissenting voices out.
One of these anti-foreign Members of Parliament, Ted Banjax, told HDUK: “While Sarkozy may be good at Gallic shrugs and mime
artistry; his impersonation of a Frenchman walking into a strong wind being particularly entertaining, the man knows nothing about
economics. If he had an ounce of Churchillian steel, Nicolas would step back and let the Germans rule his country, just as the
Greeks have. Over in Athens their new government is grateful for any help it can get. Merkel’s stormtroopers have now restored order
and are ensuring the bankrupt nation lives within its means from now on. This means families subsisting on a starvation diet of
bread and gruel while worshipping their new overlords.”
But with skirmishes breaking out across French cities between the Teutonic occupiers and ornery locals, some have asked whether Merkel’s fit of pique could now lead to a third great war on the continent, a suggestion the German chancellor strenuously denies.
“I don’t think we can resolve this mess without collateral damage.” She told reporters. “There is unrest throughout the world, and in
Germany we always knew it would take decisive action to solve Europe’s financial problems. While the French refuse to cooperate
they shall receive the attentions of our army, although the biggest issue lies elsewhere. We hope to resolve the Greeks’ problems
with ‘permanent oversight’ and, to that end, my soldiers are placing unemployed Grecians in specially constructed ‘camps’ where
they can be kept under constant surveillance. Once there, any energy that might have been expended on protesting can be
used for something productive, like breaking rocks.”

Merkel then proceeded to end the press conference by yelling: “We crush the surrender monkeys by Christmas!”

took a break from his hectic schedule of media ownership, bunga-bunga parties and grooming adolescent

hookers, to denounce both sides of the conflict, calling Sarkozy a “big-headed imp with a tiny member” and

dismissing Merkel as “an unfuckable lard-arse” before running off, giggling. No retaliation is expected to follow

these insults as German troops draw the line at following up recent triumphs by marching into Rome. Such a

move would leave Merkel’s army over-stretched and besides, those Mafiosi don’t muck about. 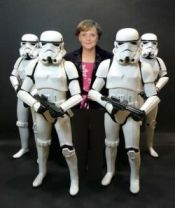