idiots around the world, all of whom witnessed the fairytale union between Prince William Windsor

and Her Royal Highness the Duchess of Cambridge, the first concerns have appeared around the

drastic changes in lifestyle for the blushing bride. Our newest member of the Royal family, the

former Kate Middleton (right), was introduced to public life earlier this year, and since then she has
found herself labouring under a strenuous schedule of travel, official responsibilities and arm movement.

“There has been a huge increase in workload for this new Princess of all our hearts,“ Royal Watcher and expert in Middleton

week, when tabloids claimed internet sex tapes were doing the rounds with footage of her sister Pippa Middleton, the nation’s

newest lust object, going down on a Maori. Fortunately it turned out to be a former Big Brother contestant in a bad wig. “

“But now the pressure is on. Kate has been asked to visit thirty countries over the next year in her forthcoming ‘A Commoner

No Longer’ Tour. The Duchess will be waving at an estimated three hundred thousand well-wishers during these twelve months.

That’s more than Coldplay when promoting their latest dreary album. It’s bound to be tiring, even with experienced medical staff

on standby to attend to the Royal physicality 24/7 “
“I mean, what if she gets pregnant?” Minnesota continued emotionally. “The girl must be looking to have a baby soon. Come on Kate,
please give birth!”
The pressure of public duty on British royalty has taken a heavy toll recently, with minor royals such as the Marquess of Milford Haven,
Viscount Linley and Princess Michael of Kent suffering bouts of what has been termed ‘Repetitive Wave Injury’. This phenomenon is
named after the motion conducted by public figures, while the most high profile sufferer is rumoured to be ninety-year old Prince Philip.
Indeed, many speculate that, along with other ailments including gout, constipation and racist brain disease, the Prince has been a
secret RWI sufferer for decades.

Additionally, some insiders have claimed the Queen’s husband (left) is addicted to pure

Diamorphine, the only painkiller effective enough to counteract the effects of putting one hand in

the air, then waving it from side to side again and again. Some witnesses even claim the Prince has been seen walking around with

both arms in protective casts when not performing his duties.

“You do have to take precautions.” Experimental scientist and self-proclaimed Repetitive Wave Injury

specialist Yves Slagroom (right) told journalists earlier today. “This is an ergonomic issue and a form

of occupational overuse syndrome, like tennis elbow or typist’s spasm. When asked, I tell public figures
to rest their waving hand for at least fifteen minutes every hour, and to undertake muscle strengthening activities during downtime.”
Indeed, Royal RWI sufferers often experience excruciating pain in their shoulders, back, wrists and fingers and this can weaken the entire
body, leading to a lack of resilience as they are asked to complete walkabouts or accept clothing from well-meaning indigenous peoples
across the Commonwealth.
“We try to make the serving staff aware of the problem and have those more ‘at-risk’ royals limit their public engagements to five a month.”
Dr. Slagroom went on. “I also emphasize the importance of warm-up exercises before a long session of waving, and easing down individual
fingers afterwards. In addition, we keep a masseuse on standby in case they start to cramp up.”

“I’m sure Kate will be fine, so long as she doesn’t push herself too hard and takes her lead from the more responsible royals.” Yves

concluded. “What she mustn’t do is copy Prince Harry. That boy thinks he’s immortal. I was asked to look at his hands after one of his

famous eighteen hour waving binges last year and the tendons had completely seized up. If Harry’s not careful he’ll only be able to form

claws by the time he’s thirty. The Prince will wish he’d listened to me when he’s crawling around the Palace on all fours, unable to pick up

objects and screaming; ‘Why God? Why me?’ I’ve seen it happen.”
But concerns for the future Queen Consort go beyond the physical, with speculation that the problems she is experiencing in her new, lifelong
role may be psychosomatic. The initial assumptions within the British media were that a peasant marrying into the UK’s richest and most
pointless family was a good thing. But what no one took into account was how someone would react when thrown in at the deep end; a young
girl with no background in waving or genetic predisposition to move her hands for ages in front of big crowds. Only now do some predict it
could lead to psychological issues around trepidation and performance anxiety, just like that old King when he tried to speak in that film.
As Middleton expert Minnesota Gorgot says: “There will inevitably be a lot of expectation resting on Kate. Society always looks to the
newest members of the Royal family to overcome the institution’s anachronistic status through a bit of the old arm movement.”

“But the Princess has a canny head on her shoulders, and I’m sure she’ll employ coping mechanisms and

innovative technological solutions. Like utilising a body double for some of the less important functions, or having a fake arm she can use when

a long way away. It’s amazing what they can do nowadays.”

“But the most important thing,” Finished Ms. Gorgot, growing increasingly loud and mad-eyed. “Is the impregnation. Come on Kate, you’re

married now and not getting any younger! We want an Olympics baby! Go on Wills, knock ‘er up!”

But many fear motherhood may be a responsibility too far for Kate, with some commentators pointing to the historical precedent of Diana, a

woman who combined her interest in land mines and extra-marital sex with up to eight hours continuous waving at her peak. And we all know

what happened to her. 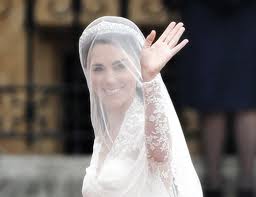 Princess Kate, pictured hard at work on her ongoing 'A Commoner No Longer' tour.
RWI specialist Dr. Yves Slagroom.
The horrific results of too much waving.
1