surrounding Beijing, where busloads of sedated teenagers have recently been

arriving from the UK. They’re here to begin eighteen-hour shifts constructing hi-tech products at the behest of big companies for an indefinite period.

a trip undertaken by Chancellor Osborne and the Mayor of London, Boris ‘Funtime’ Johnson, to China last month.

At a briefing that followed this excursion Osborne told the media: “Our trade mission was enormously successful. We informed ‘the Chinee’ that Britain is open for business, and not the kind of trade we inflicted on them back in the opium days – ha ha! No, by ‘open for business’ we mean; buy bits of our economy

with your investment money, and we’ll pay you back many times over for hundreds of years. And you can purchase as much of our

country as you want – everything’s for sale!”

“We’ve secured Asian cash at Wonga-style rates for the next generation of nuclear power plants, surface-to-air missiles and ‘mega’

food banks that will accommodate tens of thousands of starving Brits. Me and Bojo thought that it was time to offer the proud

Chinee nation something in return for this great deal.” Georgie O (left) went on. “That’s why many of your teenage sons and

daughters will soon be finding letters in the mail ‘drafting’ them to their local military transport plane. At which point they’ll be flown

out to the Chinese capital to learn the meaning of hard work.”
“Oh yes, it was a great trip all round,” Osborne reflected, grinning smugly as the boos started to resonate all around. “Even Boris’ antics couldn’t detract from my massive wins.”
This dig is a reference to Johnson’s attempts to flog his patented ‘Bikram Bus’ to Chinese bigwigs (the vehicle so-called
because it maintains an interior temperature of forty degrees at all times). Indeed, the Mayor of London actually took one of
the buses over to Beijing with him as hand luggage, forcing government officials and members of the press to board in balmy
temperatures while boasting his bus “not only gets people where they want to go most of the time, but also acts as a superb
weight loss aid for the busy commuter”.
However, once the test drive was over, a red-faced Johnson (right) fell out of the open back door and was unable to speak. On
being asked whether they might buy these unique ‘Roastmasters’ and help save the British economy, high-ranking Chinese
civil servants nodded politely, gasped they would “certainly consider it” then called for water or first aid.

But back to the growing phenomena of Asian workhouses and, to get the detail on Osborne’s plan, Home Defence was granted an

audience with the coalition Minister in charge of ‘Yoof’, Jez Bimbeard.

“It was an amazing adventure.” Jez (left) sighed. “Even though BoJo gave it everything he had, with plenty of skipping and whistling

to attract the admiration of the local girls, George came out of this Oriental ‘journey’ on top. It was the Chancellor who promised

great swathes of Britain’s economic future at knock-down prices, much to the delight of

the Chinese.”
“And while touring Foxconn’s ginormous industrial plant in Shenzhen, Osborne had his flash of inspiration.” Bimbeard went on.
“In this mega-sweatshop, George saw thousands of teenage ‘interns’ assembling products at little or no cost for the
corporation in charge; a whole economy built on indentured labour, with youngsters brought in from rural areas hoping the
exploitation would eventually lead to a paying career.”
“The Chancellor has always admired the Chinese practice of taking teens out of their homes and putting them to work for little
or no reward, so he got to thinking about our teenage scroungers in Britain. All those chavvy families that produce litters of kids who only end up claiming benefits or in prison. Surely the Beijing model could supply an effective solution?”

And so, a group of mysterious and inscrutable Far East billionaires signed a contract with our coalition government,

guaranteeing a supply of long-term unemployed who will put together millions of iPads, Smartphones and Flat-Screen TVs in

return for little more than a bowl of rice and a tin roof above their heads.

These layabouts will be aged sixteen to nineteen, most with parents who are absent, dead or too confused to know what

they’re signing. When the paperwork is complete they’ll join the others, flown out to industrial provinces by ATOS and taught

about ‘hardworking communities’ under the stern eye of Communist guards, precipitating what many see as the logical next

step in Iain Duncan-Smith’s profoundly successful workfare scheme.
“Not everyone can put in the hours at their local Job Centre to go on claiming benefits. That’s five days a week playing Minesweeper
full-time, or staring slack-jawed at the vacancy board in the hope something will appear.” Jez Bimbeard told us later, over cocktails
at Mahiki’s. “But if we can get these youngsters off the benefits bill, out of their family’s hair and under the authority of the Chinese
government, everybody wins.”
“The Conservative party has always been keen for the next generation to ‘get on their bike’ and find work.” Jez laughed. “It just so
happens that, these days, they have to cycle all the way to Asia to secure gainful employment.”

When asked how long these feckless youths would be expected to remain out there, Bimbeard grew cagey, admitting: “They can’t

stay in China forever, there are Visa and naturalisation issues. Although we in the party have no particular desire for them to

return. I mean, none of the feckless sons-of-pikeys ever bothered to get off their arses and vote while they were here, and certainly

“If I had to guess, I’d say the scheme will stay in place for as long as Westerners want the latest high-tech electronics, all at bargain

prices.” Jez concluded, before leaving us to pay the bar tab. 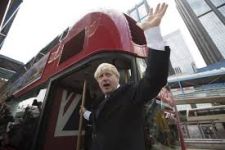