Home Defence UK
A Symptom of a Greater Malaise
INTERNATIONAL NEWS
with Al Likilla
ALL INTERNATIONAL NEWS:
Mitt Romney’s Pledge to the American People: “If Elected I’ll Go To War With Whoever You Want.”
03/09/12

momentum going in his race for the White House. Following a memorable summer trip to Europe, which

the Romney team has described as “really quite successful” and “no more gaffe-sodden than you would expect”, and the announcement of Tea Party

hero and pro-life obsessive Paul Ryan as his running mate, this morning Mitt had more good news for the American people in a speech outside

“What this proud land needs now, to stimulate growth and boost our manufacturing industry, is billions spent on weapons and

the military.” Romney cried, his strangely dark hair rippling amid the September breeze. “Defence has to be the big driver to pull

us out of this depression. Or, as I like to call it, The Obam-o-pression.”

There then followed a pause to allow for laughter at this trademark ‘Mitt-icism’ before Mr.

“For it to be effective we need more wars, a whole bunch of them.” Romney went on,
cracking a vulpine smile. “That way we put hundreds of thousands back to work trooping and fighting. We draft the unemployed,
research the hell out of ballistics and smart bombs and stuff like that, then we blast any country seen as ‘America’s enemy’ to
kingdom come! Yee-hah!””
“Of course.” Mitt simmered down. “I won’t do any of this without a mandate. In fact, I’m not even sure who to go after just yet.
International relations aren’t my strong point, and I was never much interested in geography. That’s why the Republican party has
opened the issue up to the fine, hard-working peoples of America in online surveys, vox-pops, and by listening to anyone who starts
shouting in a bar. Should we target Cuba first? Syria? Canada? France? You, the public, shall decide!”

The Clint Eastwood-endorsed Romney then left the podium before anyone could ask awkward questions about his tax returns,

religious faith, or why his wife’s horse (‘Rafalca’ - left) did so badly in the Olympics.

Excitement at this brand new war, which is expected to provide great televisuals for years to come,

quickly spread through the US electorate and on into Fox News, with right-wing thinker Milton Catsup

“This is a masterstroke by old Mitters.” Mr. Catsup explained to camera. “I have it on good authority my

pal Romney will attack whatever country the majority decide on. He’s been plotting his own idiosyncratic

style of warmongering for a while now, and this is the time to put his plans into action!”
“The shortlist of nations we might attack has been influenced by the Mittster’s European tour; something that was entirely funded by him.
Romney flew over there in his private jet at no cost to the American taxpayer.” Milton continued, to a visibly aroused Hannity (right). “While in

Palestinian threat then categorically promising US support for a forthcoming skirmish with Iran. Mitto also advised Israeli leaders his

team could talk the American people into war with “pretty much anyone” they wanted.”

“Plus there was a secret meeting in Russia, where Mitt promised Putin troops would be made available to fight Chechnyan rebels,

blot on his copybook was Great Britain. There the Mittwit tried to canvas the thinking of

Prime Minister ‘Diddy’ David Cameron about who was the greatest threat to his rule of law.

Cameron’s answer variously came back as ‘the Mayor of London’, ‘Tory backbenchers’,
‘the Liberal democrats’ or ‘my own chancellor’, none of which the US can really take out with a targeted missile strike’.”
Indeed, although Cameron was deferential and polite when #RomneyShambles talked of ‘looking out Ten Downing Street’s
backside’, questioned London’s readiness for the Olympics and, most unforgivably, used the wrong sort of cutlery at dinner,
PM-in-waiting Boris ‘Pure Mammalian Viagra’ Johnson proved less circumspect. Images of the Mayor berating the Presidential

candidate for his lack of tact through a loudhailer quickly circulated, depicting Johnson

hanging from a zip wire like some kind of spare bollock, drawing roars of approval and a

certain number of thrown objects from the crowd below.

Willard Mitten Salvador Romney is a 65-year-old quarter of a billionaire who, in 2012, runs against incumbent President Barack

Obama, and he has previous in the area of armed conflict. Mitto was an early supporter of the Vietnam ‘intervention’ back in the day,

while his wife Ann, a Professor of Equine Ballet at Stanford University, is quick to endorse her husband’s views. Yet some have

questioned Romney’s credentials to run the free world, noting he isn’t particularly statesmanlike, and once slid round a golf course

on a giant ice cube dressed as a policeman. They go on to say that Mitt doesn’t actually believe in anything, and cite his somewhat

mixed record on animal rights. This being a reference to the famous instance in 1983 when Mitt drove from Boston to Canada with

impression of the incident)..

By way of riposte, supporters respond saying Romney didn’t leave the animal up there for

the entire 12-hour drive. At one point Mitt took his terrified canine down after it had shat all over

the rear window, an act his many children, who watched this brown cavalcade from the back

seat, found upsetting. But the faithful Irish Setter was quickly hosed off and put back up
before Mitt drove on, his holiday commencing without further incident.
Perhaps crucially, those biggest critics of Romney who include the liberal media, Carl Lewis and anyone who thinks Mormonism is
‘a bit freaky’, point out it’s not as if the current occupant of the Oval Office ‘doesn’t dig a war’. They cite Obama’s record in the
Afghan conflict, his fondness for secret drone strikes through Pakistan, and the relish with which his administration greeted the execution of Osama Bin Laden, laying on hotdogs for the televised death of the Al-Qaeda leader and a number of his wives.
“Heck, hellfire, stuff and nonsense.” Romney Campaign Manager Nixon Soubrette told Home Defence when we put this to him over Skype. “That’s old news. Obama’s

simply having to finish what Georgie Bush started. American citizens won’t stand for it if he don’t.”

Mr. Soubrette goes on: “Forget Iraq, the war on terror, Libya or what have you. Those aren’t real wars. Old Rommers is about

innovative conflict for unprecedented times. We’ve seen a generation grow up playing a new type of war, pretending to be

‘marines’ or ‘insurgents’ because it’s bloody good fun. Now we need the Bald Eagle to flex his wings once more. US citizens are

looking for a just war, a lovely war; a war that provides a bit of the old shock and awe. Voters want rolling news coverage, imbedded

CNN reporters, cheering locals who cast off the yoke of oppression, while their country suffers thousands of civilian casualties which,

“So tell us who you think would make a worthwhile adversary for US might and, come November, we’ll launch the missiles.” Nixon

concluded. “That’s how we make this nation great again – by taking on a country we can beat. The American public should know they

can nominate anyone from our virtual map on the website MittGoesToWar.com. Apart from China of course. Let’s not go there.” 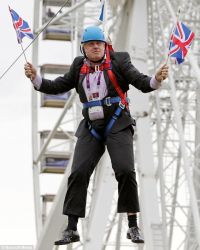 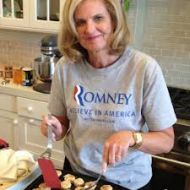 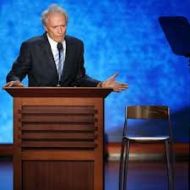 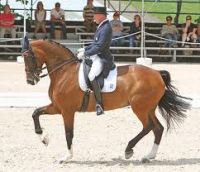 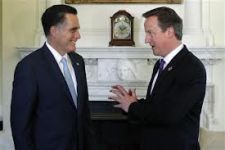 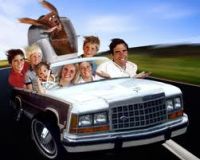 Clint Eastwood wins a debate with a chair.
1