The Vatican City, where today senior officials in the Catholic Church were

Benedict XVI aka. Joseph ‘Don Joe’ Ratzinger, whose time in office has

been beset by scandal in recent months.
“In the light of these further revelations, a decision has been taken for His Holiness to step down by mutual consent.” Vatican Spokesgirl Candy Defibrillator told the world’s press earlier today. “For this vital period of Catholic history, the Papal Conclave will ask Dave [David D’Angelo] to step up to the plate and take over the running of our Church on a daily basis. We believe Dave brings a fresh approach, new ideas and a youthful energy to the role. These attributes are needed if we wish to pull our beloved faith out of its difficult period and maintain our position in the ‘big four’ of worldwide religions.”

Mr. D’Angelo (79) is expected to ascend to the Papacy with immediate effect and oversee his

monthly contract until the end of the year, David will take the name ‘Pope Donatello III’ after

being plucked from a shortlist of contenders by the Papal Conclave of Vatican insiders. This

new Pope’s strengths have been identified as his sprightliness, availability and, most

importantly, background checks have revealed no instances of him turning a blind eye to the

Previously a member of Cardinal Ratzinger’s backroom team, David D’Angelo comes into the

spotlight during a difficult period for Catholicism. Immediate challenges include pulling the organisation out of the financial and sexual scandals that have beset it for years and reversing the trend for falling attendances by reconnecting with grass-roots Catholics. Pope Donatello will also attempt to position the Church as a valid lifestyle choice for the younger generation, something the eager Septuagenarian is keen to make a start on.
“I want to be judged solely by results.” The interim Pope told Home Defence as we enjoyed a glass of Port
together in his opulent Vatican quarters. “We Catholics have slumped to a lowly position in the religious
league during recent times, mainly due to competition from the faddish likes of Scientology or the Jedi belief
system. But with fresh blood and innovative new tactics, I’m certain we can turn this religion around. There’s
a terrific sense of history here in the Vatican City, and we have some of the most loyal supporters anywhere
in the world. Catholicism deserves to be back at Europe’s top table and I aim to get us there.”

all-Ireland had touched them inappropriately. Added to this came Benedict’s unwillingness to investigate a

paedophile Priest at a Wisconsin children’s home, the failures of a specially sanctioned ‘Vatican

Investigation Team’ he was pressurised into setting up, and his inability to admit responsibility or sanction

punishment for abusers. Indeed, following his controversial WWII involvement in Hitler Youth, it came out

Ratzinger had spent much of the last sixty years ignoring reports that hundreds of boys were interfered with inside the organization’s strictures, as well as neglecting to send sex offenders for psychiatric treatment. Instead he transferred them to the suburbs and, once there, unwitting Catholic children would be made to “receive communion” again and again, rather than report the actions of dirty Priests to the local authorities.
But the final straw came with the recent press furore around supposed Vatican links to organised crime, gun running, child trafficking, white slavery and money laundering. Church elders were expecting Pope Benedict to rebuff these implausible allegations instantly, but he subsequently failed to appear in public or even read the internal memos detailing developments, apparently due to a series of mild strokes. When the Pope did manage to gather his faculties and grant an interview with ‘What Cardinal?’ magazine further embarrassment came as Ratzinger appeared smug, farted repeatedly during questioning, and expressed his sorrow over these “tragic events” in what sounded to the interviewer like a sarcastic tone of voice.
“Do I believe the wilder headlines about the chain of Roman lap dancing clubs, or the Archbishops running a
time-share scam out of Corfu? No, I absolutely do not.” Catholic monitor and founder of Priestwatch.com
Wally Haruspex (right) mused on a recent message board entry. “But by failing to clamp down on actual
criminal activity within the organisation, Benedict left himself open to wilder accusations across the
board. This then leads to sensational tabloid headlines about protection rackets, strippers and wiretaps
capturing conversations about ‘taking down’ rival religious operations.”
“And when Ratzinger was actually shown hard evidence this guy had the cheek to turn around and blame ‘lax standards in society at large’.” Haruspex went on. “The scandal has absolutely nothing to do with “the way we let the gays flaunt it, all out in the open like

that”, as the old man seems to believe. Let’s face it, he was one shit Pope.”

Indeed, towards the end Benedict lost all credibility as the Vatican’s ‘gaffer’, with the leader of his

greatest religious rivals, the Archbishop of Canterbury, condemning Catholic dealings and the “culture

‘paedo’ jokes in workplaces around the world.
“That’s exactly why I was brought in.” Acting Pope and ‘Catholic Management Consultant’ Dave D’Angelo nodded when HDUK caught up with him during his first day in the post. “My role here is to steady the ship. I won’t be throwing big money at short-term fixes or bringing in costly foreign Bishops in a doomed attempt to win points. This regime has a very specific remit; to add a million new Catholics worldwide, eliminate sex pests from our business interests, and make the entire Vatican debt-free by 2011.”
To this end, the Catholic Church has sought out fresh revenue streams and developed a new range of merchandise
which is said to include replica vestments and cassocks, chastity belts for the unmarried and easy-to-operate
panic alarms. Meanwhile, the newly installed Pope’s future looks rosier by the hour, with the Supreme Being
(God), quoted in tomorrow’s newspapers as saying; “the job is now Dave’s to lose.”
What do YOU think about this news story? Join the debate NOW on Home Defence's NEW, INTERACTIVE
message board POINTS OF YOU! 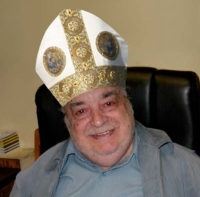 Interim Pope Dave.
The outgoing Pope is escorted from the premises.
1