A detention centre in a remote corner of Christmas Island, a thousand

miles off the coast of Australia, where today former Conservative Party political strategist and ‘lord of the

dark side’ Lynton Crosby finds himself sequestered, along with other desperate asylum seekers, following his deportation from the UK.
“Mr Crosby only has himself to blame, he’s the victim of his own success.” Westminster commentator Surly Prepuce told Home Defence. “Lynton’s trademark

‘anti-immigration’ line has played so well with the British public that, following his tremendously fresh initiatives, like

the Racist Van [left] and revised Britishness test, with its focus on Latin and Kings of England, your average, bigoted,

man in the street has a voice at last.”

and places the blame for the financial crisis squarely on benefit recipients. He has fostered tremendous division through

rhetoric even UKIP would baulk at, implicitly supporting attacks on mosques, fostering suspicion of anyone with a

foreign-sounding surname and manipulating white trash into shouting “go back to bongo-bongo land!” at anyone

brown they see in public.”

“In light of this,” Surly went on. “Crosby ought to have predicted he could be next in line for deportation, or that growing public protests might undermine David Cameron’s attempts to keep him here at taxpayers' expense.”
Prepuce concluded: “Once again, Lynton has become the story. But what an adventure he’s set off on this time!”
Following noted success targeting millionaire petrol-heads to give bumbling oaf Boris Johnson the role of Mayor of London two
elections running, Crosby has, in recent months, helped the Conservative Party prepare messages of hate in readiness for the 2015
General Election. He’s done this while lobbying to ensure coalition policies remain advantageous to his corporate paymasters in
Big Tobacco, hydraulic fracturing and the booze industry.
Indeed, it was Lynton’s success killing off bills that would have brought in plain packaging for cigarettes and minimum alcohol pricing, along with his achievement facilitating intolerance across the British Isles, that precipitated these demonstrations. They comprised hundreds of activists picketing Ten Downing Street while chanting “out with the hateful Aussie” and “go home mate”, all wielding placards that said: ‘Your Ancestors Were Our Convicts’ or ‘Take Your Drongo Arse Back to

Abo-Land’. The noise and unpleasantness became so inconvenient for the Prime Minister, Diddy Dave, that he was eventually

us on the phone from the northern island. “To their credit, the Aussies wouldn’t grant asylum to a hatemongering corporate

shill who has a history of poisoning public debate in their country. Unfortunately for Lynton, we didn’t want him here either.”

Mr Perry goes on: “So we pointed Crosby in the direction of a secluded stretch of beach where a group of his fellow asylum

seekers were attempting to fashion a sailboat out of driftwood. As they prepared to cast off, witnesses report Lynton darkening

his skin with tincture of iodine and then sneaking aboard, unnoticed.”
“Sadly, the makeshift vessel went down before it could reach the Australian coastline and Mr Crosby had to be rescued from
the sea. Lynton was then taken to Christmas Island for processing and imprisonment.” Goblin went on. “However, it remains
unconfirmed whether any of Crosby’s fellow sailors were seen ‘throwing children overboard’, as he once claimed they’ve a
tendency to do. I can tell you Lynton wasn’t looking great when they fished him out, and he’s not in a particularly good way
right now.”

Indeed, Crosby is now languishing in an isolated detention centre (right), far from his

friends and family, powerless to escape as, each day, he is mocked and brutalised by

over-zealous guards. Meanwhile, back in London, the Conservatives are left to wonder

how they will cope come election year without recourse to his base, lowest-common-denominator, yet highly sophisticated,

campaigning. The general consensus is that they'll fare “quite badly”.

Meanwhile opposition parties are in good spirits since, thus far, the Tories appear too disorganised to win, even if

commentators confirm they possess sufficient xenophobia and obnoxiousness without Crosby geeing them on. But it’s

difficult for the Conservatives to harness this innate unpleasantness in a strategic way, and they're likely to end up coming

across as scattershot racists who are completely out of touch with reality. 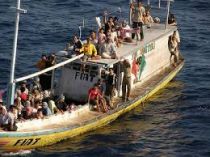 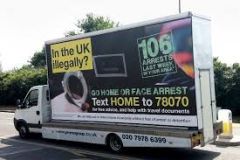 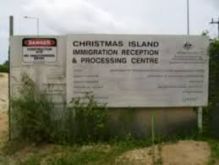