The European Parliament, where today the latest in a long line of

prohibition measures has finally been implemented by the EU in an

ongoing effort to bring into line the nation of Greece who, following a

decade of profligate overspending and generally acting like tossers

who think they have all the money in the world, have recently started

begging to be saved from defaulting on their loans. This mewling

behaviour has, in turn, somehow resulted in the country receiving a combined European Union and International

“We intend to bring this massive load of idiots in line, right here, right now. Every member nation
must act to prevent Greece bringing down the entire EU!” French Prime Minister Nicholas

Sarkozy (left) told the assembled world’s press this afternoon. “The Greeks have failed to spend

wisely, and now they would blackmail us into giving them bagfuls of cash so their economy

doesn’t go straight down la merde. What a big old bunch of bellends!”
At this point the German Chancellor, Angela Merkel (right), intervened to declare: “We will get our
way! Germany and France have already forced the Greek government to impose horrible austerity
measures on its people, slash their pensions, and raise stealth taxes to meet increasing
financial obligations. Earlier today I was advised Athens investors have now recommended the
country’s credit status drop once again, so we’ve now downgraded them to the status of ‘wankers’.”
At this point there came a sharp intake of breath from everyone in the room.
Recent years have seen doofus-style overspending by the Greeks, most obviously around the 2008 Olympics, on a number of overblown public monuments, and far more groceries than they could ever use. This has led the nation’s budget deficit to rise to

upwards of 13% of their Gross Domestic Product. When the financial crisis finally hit, knock-on

effects left the Greeks in a situation where post-war style rationing had to be enforced. Today

the average Greek family receives just a single cup of sugar, two loaves of bread, and one large

bag of depilatory products per week. This depletion in Greece’s collective lifestyle has led to

protests, rioting and much disgusted grunting through recent days.

As EU spokesman Hanky Gizzard told Home Defence:  “For those who do not understand our

labelling system, the European Union has many different appellations assigned to member

countries depending on the current economic climate. For instance, a sudden boom in exports might mean a nation is labelled ‘Cocky’, while some upturn in the stock market can lead to the nomenclature of ‘Flash Bastard’, as happened in the UK a few years ago.”
“Yet when a country deliberately spends beyond its means with no thought for the
consequences that’s a different story.” Mr. Gizzard went on. “Then we officially label them
‘In The Doggy Doo’ like Ireland, or the recession-inspired ‘Up-Creek / No-Paddle’ which is
where Spain currently find themselves. Yet never before has one of our member states
progressed so far in destroying the lives of its own citizens and threatened to bring the
single European currency down by themselves. Not until Greece came along anyway. I
therefore have little choice but to opt for the very worst formal designation the EU can offer:
They really are a boatload of wankers.” 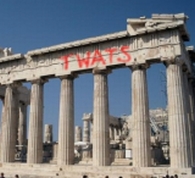