The global money markets, where the financial turmoil and neverending

crises of past months are approaching their endgame. Hippies and beatniks

once despaired of ever seeing the day, but now experts predict that 2009 will

be the year when the entire system of capitalism; a political ethos that Western countries have operated under

for centuries, will experience its final death throes before expiring like a disorientated whale and being

“This is exactly what we’ve been campaigning for all these years.” Leading anti-corporate spokeswoman

Champagne Sithole told HDUK when we located her, skipping through London’s square mile and dancing a jig

with scores of other anti-capitalists. “We’re looking at the stock market being wound down completely

come summer, leaving 90% of bankers out of work and all the country’s privately-held institutions nationalised at

Champagne then waltzed off in the direction of Canary Wharf, unfazed even when we pointed out that her

generation’s pensions had gone up in smoke because of the government’s reliance on stocks and shares,

have evaporated in the financial melee.
Yet some politicians continue to deny anything is wrong, idiots like 'Gorgeous' George Osborne (right). The
Shadow Chancellor recently told the House of Commons that light-touch regulation on hedge funds and other
weird financial mechanisms nobody understands “is still the way to go” and that the Tories had faith “the
market would sort itself out” without elected officials doing anything. This in spite of the very notion of a private
company becoming anachronistic in 2009 as Britain experiences an 80% drop in high street spending and
every mortgage lender queues up to be saved by the Prime Minister. Meanwhile over in America deregulation
has been abandoned altogether with a government bail out of the auto industry planned and all US banks amalgamated into a single institution. This behemoth will be owned by the taxpayer in a move more reminiscent of a Latin American republic than the once-mighty superpower.
When these facts were put to Mr. Osborne after his speech in the House of Commons the Shadow Chancellor responded by sticking two fingers in his ears and screaming: “NOT LISTENING!”

A visibly shaking George then retook his seat.

controlled by merchant owners for profitable purposes, leading to a culture of greed and risk-taking that

could never be truly sated. England has operated by the principles of capitalism since feudalism ended in

the 16th century, and this system gradually became the dominant force over the next four hundred

years. During that time the British population were tricked into believing capitalism was the best way for

the majority to live, promoting the kind of economic growth where all benefited.

would invariably lead to profiteering, selfishness, poverty among the lower classes and the eventual destruction of the planet with all humanitarian concerns subsumed inside the overarching ideal of monetary gain. With the price of goods and services dictated by an out of control free market, and a culture of wild speculation fostered by chimerical success stories, many of which were entirely made up, soon people who could barely afford to heat their homes were being offered 125% mortgages and assured that of course they would make the repayments somehow, so don’t worry your pretty little heads about it.
Then came the sub-prime crisis, market collapses and the closure of Woolworths, all proving that unfettered acquisitiveness might not be such a good idea after all. Now discredited economic forecasters are trying to claw back some of their tarnished reputation by predicting that the West will move into a post-capitalist era. Some foresee the embrace of
socialism, while others envision a return to totalitarianism under Europe’s increasingly
right-wing governing systems. A few even anticipate humans reverting to some manner of
pre-feudal bartering during their day-to-day existence.
“I can see failed initiatives like ‘loans’ and ‘mortgages’ being banned soon.” Buddy
Payload, a former CEO with Lehman Brothers who now runs a stall selling fruit in the
city, told us. “All future deals for goods and property will be done cash in hand as the
notion of ‘credit’ is lost to posterity. In fact, you’ll be more secure sticking your cash
under a mattress this year than in any bank account. Keep it hidden around the house,
that’s my advice. Like they do in Russia.”
Mr. Payload then began shouting about his ‘fine pomegranates’ and how many satsumas he could let passing workers have for a pound to ‘beat the credit crunch’.

“Don’t feel sorry for me.” Buddy asserted, returning his attention to us. “I’m better off than most. My old

colleagues have seen their wealth disappear too and many haven’t coped with it as well. Those

themselves. Many high-flyers simply can’t adapt to life outside of capitalism, they’d rather die than spend

the rest of their lives in a slightly lower socio-economic bracket. I feel for them, really I do. Although I

haven’t got the time or money to attend their funerals.”
“As for me, my marriage might have ended, I can’t afford a mistress any more, and my son has transferred to
a state school while our house isn’t worth anything, but at least I’m still smiling. Get you a punnet of plums
guv? Good and juicy they are!”

In his latest emergency address to the country the Prime Minister, Gordon Brown, urged everyone to

remain calm, maintaining that, while there will inevitably be fall-out from the expiry of capitalism,

Britain is ‘well placed’ to deal with the repercussions. He also promised that councils across the

streets in recent days. Meanwhile empty branches of Zavvi, MFI and the Officer’s Club will be used as

massive dormitories for those whose houses have been repossessed, these places currently being 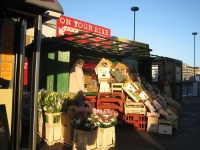 Anti-capitalists spread
a new message.
The face of Capitalism, before it decomposed.
The former CEO of Lehman Brothers at his new business.
Another banker takes the easy way out.
1