The Channel Islands, just off the coast of Normandy, where this idyllic landscape of retirement enclaves

military resources. The move comes as a result of perceived threats within this tiny stretch of land, where

the ten parishes have been accused by defence secretary Liam Fox of planning to invade nearby Sark, and

wrestle its sovereignty back from Jersey. Indeed the Mayor of Guernsey, Elliott Snufkin, was yesterday accused by the ConDems of promoting

anti-British feeling on the island, tolerating white collar criminals, and generally being a ‘Preacher of Hate’.

“That’s just ridiculous.” Mr. Snufkin (right) told HDUK as we called at his office, where Guernsey’s most powerful man

was barricading himself in for fear of assassination attempts. “The claim that we are intent on taking our neighbours

by force has been made up by a deeply unpopular government, to distract people from its dismantling of the NHS and

failure to sort out the economy.”

“Do you want to know what really happened?” Mayor Snufkin asked, as the sound of fighter planes grew audible in the

background. “I’ll tell you. This government guy in a suit appeared last week, claiming to be a Tory backbencher on a

‘fact-finding mission’. I pulled out all the usual hospitality; our tour of the coastline, visit to the leisure centre, inspection

of a dairy farm. It was as glitzy as we get over here. Then, at the end of our jolly, the bloke pulls out a bottle of port

and we raise a glass to ‘a wonderful holiday destination’.”

“Next thing I know,” The distraught Mayor went on. “Everything's gone blurry and this guy’s betting me I’m too drunk to read. I won by saying some words out loud from a piece of paper he was holding up. Unfortunately it turned out to be a prepared statement
describing my intention to take Sark by force, and ‘declare war on the British crown’. And because he was wearing a wire, I
woke up the next morning with a massive hangover to find my slurrings all over the press. They described it as ‘a declaration
of hostilities’. Now I’m deep in the brown stuff.”
Indeed, the tabloid press has been laying the groundwork for this development, whipping up anti-Guernsey sentiment for a
while with tales of the island being operated as a virtual fiefdom, a haven for evil bankers, and with a hidden history of ritualistic
child abuse.

rising hopelessness and double-dip recession, preferring to concentrate on the risk of inaction

against ‘the rogue state of Guernsey’ while this current regime remains in place. To a soundtrack of whooping Tory MPs, Cameron

promised to implement the harshest possible sanctions against the island, mobilising UK forces to protect the inhabitants of Sark (which

comprises the billionaire Barclay brothers, twenty farmers and some waterfowl), and talking up Guernsey’s military threat. In response

the Mayor protested that his only army presence consists of a dozen aging volunteers, three of whom possess antique bayonets.

“Cameron and Clegg have been very canny here, learning the lessons of Thatcher’s first term in office.” Military Historian Typecast

Octoroon told Home Defence after the news broke. “Faced with plummeting poll ratings in the run up to by-elections, and in the face of

unpopular measures that are increasing unemployment, battles with the unions and general dissent, Thatcher’s only chance was to

initiate a made-up war somewhere obscure. Back then Maggie found the courage to follow through with her convictions, throwing away a

thousand lives over the Falklands Islands. It was a small price to get the public rallying round

and granting her re-election.”

The Falklands conflict lasted for 74 days during 1982 and was never officially a war. The murkiness

of Argentina and Britain fighting over a place with nothing in it was overshadowed by an outbreak of
flag-waving and ‘Britannia Rules The Waves’ across England. There was much celebrating and a ‘feelgood factor’ when the altercation
concluded and Britain ‘won’. In a happy ending the UK retained control of the Falklands, a place most people had no idea we
maintained in the first place.
“This is the coalition’s Falklands moment, but instead of penguins and sheep their targets are in-breds and Fresians.” Mr. Octoroon continued, lighting a pipe filled with snuff. “They have skilfully deflected any criticism that this government is soft on bankers, comparing England’s laws to the 0% corporate tax rate in Guernsey and their

various financial dodges. David Cameron has now vowed to put this situation right through force, and even as I speak a naval force is

being despatched to Alderney with the intent of occupying Guernsey by amphibious assault. The Royal Navy will then neutralise the

66,000 population, most of them elderly, if they choose to complain about it.”

“This might not be as easy as the Falklands to spin though,” The historian went on. “Despite our media portraying Guernsey folk as

corrupt, cow-tipping tax evaders with a lust for power, they’re essentially the same as us Brits and much less easy to hate than the

While a nation waits with baited breath for further developments, reports claim British forces have sunk what they are calling a

‘Guernsey Military Vessel’ earlier this morning, although independent observers say this was
actually a sailboat piloted by a middle-aged couple. These amateur ocean-goers then spent several hours floating in a dinghy
waiting to be rescued while enduring a chilly breeze. Meanwhile, in Guernsey’s capital of St Peter Port, fear has gripped an
already edgy population (right), many of whom are chatting with concern over tea and buns in response to the Prime Minister’s
announcement that he “has not ruled out airstrikes”.
Back in London, opinion polls now put the Conservatives ahead of Labour for the first time in nine months, while the army has
reported a 200% increase in applicants. Indeed, many of these potential soldiers are excited at the prospect of signing up in
time for the summer because, as one put it; “the Channel Islands are a lot nicer than Bagram.” 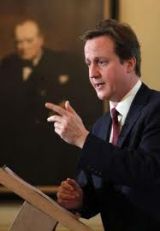 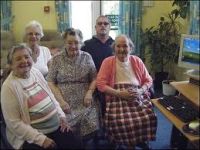 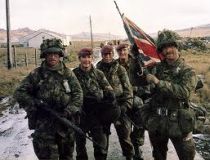 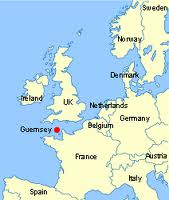