Home Defence UK
A Symptom of a Greater Malaise
SPECIAL REPORTS
with Al Likilla
ALL SPECIAL REPORTS:
Conservative Party’s ‘War On
Women’ Taken To The Next
Level
14/02/12

The House of Commons where, earlier this week, David Cameron’s

female advisor Virginia Adipoise announced the next phase in the Conservative-led coalition’s victimization of the fairer sex, wherein those of the

girl persuasion bear the brunt of national austerity measures. This move follows cuts to childcare, the abandonment of SureStart, a lack of

funding for social care departments, the overturning of child benefit, closing after-school clubs and the ‘Health In Pregnancy’ scheme, as well as a

reduction in distaff-focussed tax credits. Meanwhile the government lays off thousands of workers in the public sector, the biggest UK employer of business-suited ladies.

mess.” Ms. Adipoise (left) told a half-empty and 95% male session of parliament. “With this in mind, I am moving ahead with

“As for the alterations to housing benefit, it's expected thousands of single mothers will be forcibly removed from their council

houses by burly bailiffs.” Virginia went on, trying to gain the attention of a couple of sleepy old men. “These feckless lasses will

then be re-homed in specially built single-room dorms that are nothing like prison cells before anyone says anything. We will pass the newly-vacant houses on to angry white men with alcohol problems and a chip on their shoulders. You know the sort, blokes who think their jobs have been stolen by immigrants, and blame some weird combination of feminism and political correctness for the state this country’s
in.”
“It’s important to help these guys out.” Adipoise concluded. “Otherwise they’ll start voting UKiP.”
The political response to her proposals was immediate, with Ed Milliband (right) plunging into the debate to say he would
have to consider things quite carefully and get back to us in six months. But it was the Shadow Home Secretary, Yvette
Cooper, who took the lead at Prime Minister’s Questions, accusing ‘Diddy’ Dave of being “a typical, Eton-educated elitist
who can't empathise with anyone different”. Cooper then cited the poor, the young, ethnic minorities, and the non-public
school educated as those most at risk (alongside females) before accusing the Conservatives of ramping up their so-called ‘war on women’ and then ending with a number of horrifying statistics and tragic case studies, all involving women forced to exist below the breadline.

In response to this shocking tirade, Cameron (left) turned to his fellow front-benchers, including a giggling George Osbourne, and

“Ooh, get a load of the skirt, she is a feisty one, getting in a tizz about something she doesn’t understand. Is it your time of the

month love? Is it?”
Mr. Cameron then proceeded to place two fingers over his mouth and stick his tongue between them, wiggling it about to simulate cunnilingus. This obscene gesture drew rapt applause and howls of delight from a number of Tory MPs in the house, one of whom was then heard to shout “SWALLOW MY JISSOM!” at Cooper.
While allegations of coalition sexism grab the headlines, amid reports of the car tax doubling for women, to compensate for their perceived
lack of ability on the roads, much of the ongoing work to undermine and impoverish a whole gender has gone unnoticed, as Political Analyst
L’Argent Collywobble (right) told Home Defence.
“Sometimes the most effective policies are the least obvious ones.” Mr. Collywobble confirmed. “I hear that Iain Duncan Smith, the Work and
Pensions Secretary, intends to tackle his millions of unemployed creatively, and in a refreshingly non-PC manner.”
L’Argent goes on: “Duncan Smith will re-categorise married women who have lost their jobs as ‘professional homemakers’ or ‘full-time
housewives’. His rationale is that staying indoors, cooking and overseeing the kids before making yourself look pretty for your husband, is
just as important as paid employment. While it’s nice that Duncan Smith recognises this work, I’m sure lady types would prefer to earn money

for domestic tasks, rather than just getting a pat on the head and a move to a different demographic.”

“You can see the attraction in this reclassification for the government though.” He concluded. “This change in status could wipe

hundreds of thousands off the unemployment figures at a stroke, with nothing more than a change in the nomenclature.”

and silence from the Liberal Democrats on the issue, it is left to the Prime Minister

frustrated”. As such, the list of grievances and hardships the chick gender will

endure before the next general election is likely to expand further, just like their

waistlines after they inevitably give up on another diet.
In an attempt to mollify some women who, analysts say, could make up as much as half of the electorate, London Mayor and
enthusiastic lady appreciator Boris Johnson (right) went online at Mumsnet earlier today. Unfortunately his Q&A session had
to be cancelled halfway through, when Johnson inquired what one thirty-something blonde was doing for dinner later and told
a mother of three, who expressed concern at plans to raise the female pension age to seventy five, not to worry her pretty little head about it. 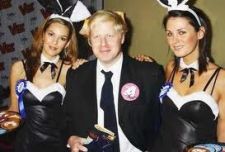