The city of London, where recent weeks have seen the financial

districts in a state of fear as investment bankers and affiliated

“What the government didn’t realise when they brought in this horribly populist measure,” Economic analyst and

founder of activist group ‘Justice For The Very Rich’ Treat Genuflect (left) told HDUK. “Is that their short-sighted

actions would lead to a skills drain in the Square Mile and destroy Britain’s standing across the world. Millionaire

gone further and become radicalised, pretty much instantly. I know many who have left the country to be educated in

insurgency at a mosque outside Karachi. Now they’re on their way back, all tooled up and righteously angry. The

British government will soon be forced to confront a terrorist threat of their own making, this so-called ‘White Collar

Tsunami’.”
Indeed, border patrol have been caught unawares by the appearance of these dangerous men, all of whom appear
paunchy, red-faced and apparently unthreatening. These professionals have been allowed to return in their droves
after previously claiming to have left forever as tax exiles and MI5 now believe that, once back in Britain, the
ex-bankers will exploit underworld contacts to lay their hands on guns, explosives and bounty hunter-style
bandannas, with the intention of bringing down symbolic targets including the Gherkin (right), Canary Wharf and
Chancellor’s outside lavvy. These men are said to be inspired by a hatred of the government, one that would target
their former industry simply because the banking sector was directly responsible for the worst economic crisis in
living memory.
We spoke to Greta, the wife of former HBOS chairman Barry Nondom, a man who smuggled himself out of the country when it was announced he would be taxed at a rate of 50% on his earnings from now on. Barry then spent time posing as a Muslim at a training camp in the wilds of Eastern Yemen before returning. His wife told us:

“My husband vanished for months, leaving me and the kids with nothing but a six-bedroom house in the Suffolk countryside and a 5K monthly income paid from his offshore bank account, tax-free. When I have time to pause in my hectic schedule of shopping and visits to the manicurist I get sick with worry.”

Mrs. Nondom then paused to apply some onion-derived eye drops and dry the resultant tears. “In the

middle of Tuesday night I heard a knocking at the bedroom window. It was my Barry, all dressed in black

and wearing one of those IRA balaclavas. He wanted to store semtex in our Aga and said to contact him

only if the anti-terror squad came sniffing round our gazebo. I pleaded with him to come back and let me

know his future plans but all he said was: “I’m making the world a better place baby”.”

Mr. Nondom (left) then fell out of the tree he was perched in, swore loudly and disappeared off into the

night.
Stories such as this have grown widespread since the Labour government, desperate to fund its way out of
the recession, began action to curb the risk-taking with taxpayer money and bonus culture that had
underpinned the markets for so long. Meanwhile those bankers who lost their jobs but chose not to travel
are said to have been radicalised in the basement of a cigar club off Threadneedle Street (left). This
members only establishment was raided last week after a tip off, whereupon the police found a number of
empty sherry glasses and hastily-discarded cufflinks, the men who had been plotting one step ahead of
them again.
One of these dangerous individuals, an investment banker who asked us to call him ‘The Reaper’, agreed to speak with Home Defence on condition of anonymity. He told us:

“A day is coming, you mark my words. There are hundreds, maybe thousands of us, all linked by a network of underground cells. We have undergone intense physical training to make sure everyone is in tip-top condition for the financial jihad to come.”

scotch on the rocks and injecting insulin directly into the vein.

“We will not give up our livelihoods.” This middle-aged diabetic continued.

“Enormous untaxed payments are our meat and drink, and we can’t

relinquish them without a fight, to the death if necessary. What the politicians

want to end: our macho culture; the betting on the markets; the endless

whatever the outcome; this is our life blood. Clamp down on bankers and I won’t

be able to afford private educations for my children, a holiday home in the

Dordoigne or gaudy jewellery to adorn some bimbo mistress. These little perks

are vital to the success of Britain.”
“I’ve travelled the world developing my unique ‘Take No Prisoners’ finance.” The mysterious man continued, “And if it results in some collateral damage and a body count then so be it. These deaths are no different from innocent bankers taking their own lives because they've been forced into a slightly lower income bracket. Whatever the Prime Minister says, there are endless riches to be had. And if I can’t get my hands on them I’m going to blow shit up instead.”
As Home Defence went to press a group of militant ex-city workers led by the former head of Northern
Rock were spotted with rocket launchers outside the Royal Mint while Mervyn King (right), the governor
of the Bank of England, was rumoured to be in protective custody and “pooing himself”.
Privately, the intelligence services expect 2010 to be a year of carnage on the stock exchange, with
scenes reminiscent of the 2008 Mumbai attacks, only this time involving middle-aged men wearing spectacles and brogues. These freedom fighters are planning to burst onto the trading floor, take dozens of stockbrokers hostage, rampage through burning Westminster streets, then turn their guns on MPs in an attempt to change their image once and for all, each hoping to go down in history as a virile revolutionary. However, an alternate view is offered by representatives from the Metropolitan Police Force. They tell HDUK that these radicalised bankers are likely to screw up their attempts at nationwide financial jihad, just as they have everything else, and end up harming nobody but themselves.
SPECIAL REPORTS
with Al Likilla
Home Defence UK
A Symptom of a Greater Malaise
Radicalised Bankers Return To Terrorise London’s Financial Sector
28/04/10
ALL SPECIAL REPORTS: 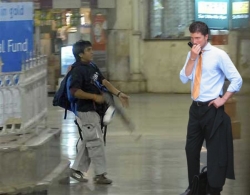 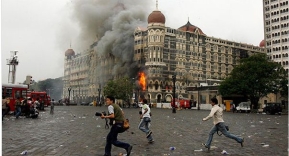 Light-touch regulation by any means necessary.
The shape of things to come?
1