A Primary School outside Lancaster in the north of England, where today much-loved education

term. Today Mr Gove gives a detailed speech, attended by HDUK and others, focussing on what

he is calling ‘the best way to address the current learning gap between north and south’.

“Every child in this country must aspire to a more rewarding existence and dream big. Kids today

should believe they can be anything they want to be; particularly if it involves a six-figure salary and joining the ranks of what our Prime Minister calls ‘the wealth makers’,” Gove told an audience of parents, teachers and media, his Pob-like face vibrating with self-belief and certainty. “But this wonderful dream of material

fulfilment is currently only available for England’s south – an area of the country I like to call ‘the cradle of civilization’.”

As shocked murmurs rippled through the hall, Gove ploughed onwards: “Not all of your indigenous children will be able to live down south,

even if we Conservatives accomplish our goal of bringing immigration down to numbers countable on two hands. It’s a simple matter of

numbers, no doubt appreciated by the Maths teachers here.” Gove (left) joked, pausing for a chuckle. When confronted with silence he

swiftly continued. “No, instead we will help your uncouth offspring in other ways; by moulding their personalities and opening up a more

civilized lifestyle for little boys and girls from the north.”

“I’m not making judgments here - it’s a simple fact that looking or sounding northern makes a worse
impression than those who evoke the south.” Gove went on as the first catcalls began to resound. “Inhabitants of the north earn less
than their southern counterparts, they’re mostly unemployed, and the hobbies up here couldn’t be less sophisticated. It’s always
raining or frozen, and still teenagers persist in going out without a coat on.” Gove tutted. “Perhaps worst of all, everyone in the
vicinity has a strange aversion to voting Conservative, a behaviour that’s spread far across this desolate, soon-to-be fracked wasteland
you people call home. Thank you very much, thank you.”
Mr Gove was then led away by an aide for his own safety, but not before raising his voice above the boos to declaim: “We’re going to put this right, oh yes. Soon everyone here will be eating their dinner in the evening like normal bloody people! And don’t bother shouting your abuse – I can’t understand a word you’re saying.”

Turning to his helpmeets, Gove was then heard to whisper: “Come on team, let’s get on the M6 and go back to civilization…”

quality and limited earning power of what Tories call ‘the northern peoples’. In order to rectify this, Gove and Cameron have arranged for

specialist staff and cognitive behavioural therapists to be helicoptered across Yorkshire, Cumbria and the surrounding counties, with the

aim of proving that ‘the southern way’ is every child’s guaranteed route to wealth, gentility and happiness.

On arrival these support staff will be joined by scores of Special Constables, all charged with ousting negligent
fathers from working men’s clubs and confiscating out-of-control whippets.
“Following recent cutbacks, I’m the only careers advisor left in the whole of Lancashire.” School affiliate Declan Fatberg (right), who originally
hails from Hove, told Home Defence as the programme began its roll out. “I’ve been travelling this Godforsaken county informing pupils that

anything’s possible, if they will only work with our speech therapist to lose that ridiculous accent.”

“Of course, we'll advise there’s a natural limit to what can be achieved in the northern world, if they choose to

retain the natural intonation of this district. In that instance, schoolchildren can only expect the occasional TV

voiceover in terms of employment, at the most.” Declan asserted. “Once they’re convinced, learning is

confronted with those who speak differently in a professional situation - usually a well-spoken Surrey type who went to Eton or Harrow,

before rising to become the CEO of a hedge fund.”
“Make no mistake, this is hard work, but the job satisfaction can be huge when it goes well.” Fatberg confided. “To metaphorically wipe the soot and bird droppings off a class of northern boys, and instil into each urchin a belief that their future doesn’t have to involve working the steel industry or going down ‘tut pit’ every morning is just so rewarding.”
In addition to this, all children who attend one of the government’s flagship ‘free schools’ will be issued with a complementary set of audio
files featuring the likes of Pippa Middleton and Gyles Brandreth reading from Sense and Sensibility in the approved ‘Received Pronunciation’
manner. These youngsters will then be asked to ape said vocal style as homework each evening.
Early indicators are positive, meaning that the initiative could combine with after-school cultural appreciation sessions, opening northerners’
eyes to the wonders of ballet, lacrosse, taking cream tea of an afternoon or embracing the ‘foodie’ movement in general. Indeed, many Year
7 pupils have already swapped their flat caps for straw boaters and are sounding more like Little Lord Fauntelroys by the day; scolding
parents for eating barm cakes with bread and dripping while clamping down on talk of ‘babbies’, ‘pints o’ mild’ and ‘a pig in a ginnel’.

like pigeon fancying, playing on slagpiles or hitting things with a stick.” Michael Gove told Huw Edwards in a follow-up

interview for BBC News. “I won’t hesitate to involve social services if I hear of northern mothers trying to stop this

‘southernisation’ from reaching their mucky bairns. Keeping up the so-called ‘traditions’ of tin baths or toileting outside is

clearly holding this generation back, and as such it constitutes abuse. Should this criminality be inflicted upon the best

and brightest youngsters, they will be taken from their homes and forcibly repatriated among the respectable middle

classes south of Watford.”
“And learning how to speak properly is just one of the opportunities I’m opening up for these ungrateful beggars.” Gove went on. “We’re
going in to focus on filling hardworking under-12s with self-belief, so that anyone who doesn’t see their future down here where the
weather’s better and the best people live can head on back to Merseyside or Northumberland and, once there, become
locally-renowned advertising executives or investment bankers, thereby bringing prosperity to the moors and heathland.”
When asked whether this whole scheme wasn’t simply a means of increasing cultural homogenisation across the rich and diverse
landscapes of northern Britain, the Education Secretary smiled and responded with: “You say that like it’s a bad thing.” 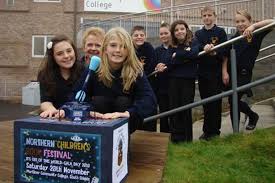