SPECIAL REPORTS
with AL Likilla
Home Defence UK
A Symptom of a Greater Malaise
ALL SPECIAL REPORTS:
Impoverished Family Agrees That Raising Inheritance Tax Threshold Is “A Good Thing”
25/08/15
To Castleford in Wakefield, part of the forthcoming ‘Northern Powerhouse’ phoenix that will rise from the ashes of Britain’s post-industrial decline.
HDUK is here to interview mother of two Slapdash Atmos, as the repercussions of our government’s recent ‘Omni-Evil Budget’ continues to
spread outward from the corridors of power in Westminster.
“Lots of people say the Conservatives raising the inheritance tax threshold from 325k to a cool million will only benefit the super-rich,” Ms
Atmos (right) told HDUK in her temporary bedsit accommodation as her two young children watched, wide-eyed. “But I’m an optimist, and I believe this could lead to some cash trickling down to the rest of us. For example, if my husband Darren had died after the birth of our son, instead of legging it to the next town to shack up with some slut, and if he’d somehow accumulated half a million quid rather than the square root of fuck all, me and the kids would be laughing right now.”
Indeed, many working class voters across the UK have magnanimously backed this initiative, welcoming a change in the law that is expected to cost upwards of a billion pounds, money that could
have been spent on keeping thousands of children fed, providing mental healthcare for troubled individuals currently roaming our streets, or buying a bunch of bombs to drop on the Middle East.
In fact, HDUK can exclusively reveal these changes to the inheritance tax system were mulled over long and hard. The Conservatives knew they had to do something about out-of-control
London property prices, and what they eventually decided upon was a policy that would make it easier for those owning said properties to pass them on to their cossetted offspring, without
the need to pay a single cunting penny of tax.
“I was down the benefits office the other day, telling the man there I’d quit my job at the cafe because the reductions in tax credits means I’ll no longer be
able to afford childcare and I’m better off on the dole,” Ms Atmos went on. “When some intense bloke waving a copy of Socialist Worker came in asking
why we bother having a system of taxation at all, if it’s only to remove money from the lower classes like us.”
“Well, I had to say to that loudmouth extremist: you’re wrong. Inheritance tax breaks aren’t for the likes of us and besides, most millionaires have worked hard for their money, by
sitting in meetings or getting stock market tips from insiders or what have you. If you don’t like it, you should have been born into a wealthy family – that’s what I told him.”
“Then I filled in several dozen applications for jobs I won’t accept even if I get them, because I can’t afford to,” Ms Atmos smiled as, in the background, her youngest child wailed for milk and his sister attempted to shush the boy by saying there wasn’t any. “I just hope they build me a council house and then I can meet a good man who doesn’t want to have a child, because the third one won’t get anything from the state. That’s the
situation I’m afraid. We wouldn’t be able to afford a baby, not unless my new BF was part of the 1%, and what are the chances of that round here?” Slapdash asked, pointing to
the surrounding neighbourhood of derelict properties, dominated by a now-abandoned library.
“Seriously though, if I had to do it all over again I’d definitely take the precaution of asking my parents to give me up for adoption by the rich. Imagine what it’d be like to bequeath
these little ankle-biters a million quid, tax-free - amazing!” Ms Atmos’ face fell then as reality set in. “But that’s not going to happen is it? However hard I work, there’s nothing
anyone can do. The rich are rich and the poor are done over and that’s just the way it is and besides,” she concluded, heading for the kitchen to see if there was anything in the
house to feed to her kids, “there’s always the lottery!” 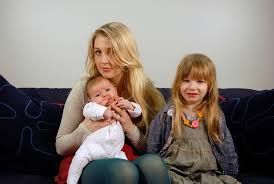