The high streets and shopping centres of Britain, where the nation’s fastest growing retailer

Poundland, a network of 350 stores selling stuff at one hundred pence a pop, has announced an

ambitious expansion plan which means the conglomerate will own half of all the available high street
outlets within a year.

“With our stupidly cheap and apparently random selection of goods held in-store, Poundland is uniquely placed to thrive in Great

the lower demographic housewives who frequent our shops understand, in recent months we’ve begun to stock fresh food including

“Following their success we’ve discovered that in a time of high unemployment, benefit cuts, rising inflation, and great swathes of

people living on the streets, what our customers want most is value. They aren’t too bothered about product quality. That’s why

“I’ll admit,” Mr. Astrolabe (pictured left, holding a massive pound) goes on. “Not all of these will be
the best or most reliable lines on the market. But I’d be bloody surprised if you got them cheaper anywhere else.”
Intrigued, Home Defence visited our local outlet in Turnpike Lane, made famous by the Jubilee-themed Banksy stencilled on its side, an
artwork that has made the North London pound shop a tourist mecca and increased the value of its premises five-fold. Which is
somewhat ironic, since the mysterious West Country hipster was intending to highlight the indignity of child slaves who produce
Union Jack bunting out of third world sweatshops, sold on at a quid a go. Or something. No one seems entirely sure. Nice pic though.

Once inside the shop, grim-faced assistant and graduate of the government’s

‘Welfare to Workhouse’ programme, Sherie Spansule (left), gave us a tour of the

shelves and floors which were literally overflowing with thematically inconsistent goods.

goods like spice racks, fresh fish, and, most recently, a batch of car batteries for the 1986 Volvo Estate. These days

I tell families to come to Poundland and do their full monthly shop. That is, unless they want frozen goods,

She then proceeded to give a sigh, complain about ‘all this halibut stinking the

place out’ and go to help a checkout girl who was trying to explain the pricing
system in detail to a particularly intransigent customer. “They pay me three pounds twenty an hour to work here.” Miss Spansule
said as we were leaving. “In case you were wondering.”
With hundreds of outlets employing close to seven thousand staff, Poundland has been a major British triumph since it was opened
in 1990 by two blokes, keen to introduce the concept of ‘price-point retailing’ to Europe. Back then the burgeoning chain was
twinned with Deutschemarkworld of Germany and Japan’s Yenville and, by 2012, its annual turnover approached half a billion, with
the ‘flagship’ Croydon branch the biggest single-price discount outlet on earth. Now the new owners believe their empire is uniquely
positioned to push on into other markets.
“Our next big investment is in the Financial Services Industry.” Reggie Astrolabe told us excitedly. “I’m aware our ambitions in this
area have been the subject of negative press coverage already, but with the increasingly illegal and kamikaze activity of established
high street banks, what better time for a baggage-free alternative?”

The CEO goes on: “The great thing about PoundlandBank is that we’re entirely transparent and straightforward. We keep all the

Buy your house through us, and we ask you to pay off the debt at a rate of a pound an hour for the next hundred years. What

With such ambitions, it is expected that Poundland’s parent company (private equity heavyweights Warburg and Pincus), will

go on to coordinate the takeover of many recession-hit chains and abandoned shops, coming to dominate the high street by

2015. But critics say selling a bunch of damaged crisps and sticky cans of Dr. Pepper is a very different business model from

facilitating financial transactions, while early adopters of this new bank have been disappointed to find that Poundland

Cashpoints don’t dispense notes. Instead all the withdrawals are of a single denomination, vomited out in a kind of fruit machine shrapnel cascade.
As Home Defence was going to press, the corporation’s arch-nemeses ‘99p Stores’ were threatening to call
Poundland’s bluff by announcing their own expansion. This would cover products such as lawnmowers,
furniture, and second-hand Vespas, all of which are expected to be available in-store at a slightly lower price
than their competitors. 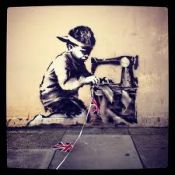 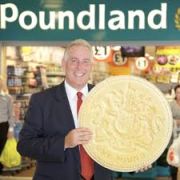 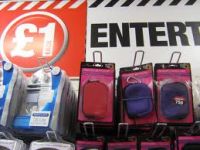 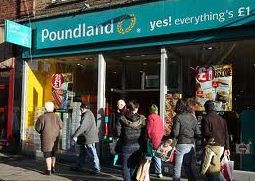 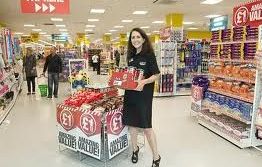 Sherie Spansule puts on a brave for the photographer.
What PoundlandBank will look like.
1