SPECIAL REPORTS
with AL Likilla
Home Defence UK
A Symptom of a Greater Malaise
ALL SPECIAL REPORTS:
Police Report Themselves to IPCC Before Launching Criminal Investigation
11/04/16
To Liverpool, city of culture, where Merseyside Police have become the latest force to undermine their own work trying to fight crime.
Following the discovery of a serial offender operating within the city and, on hearing who was to be assigned the case, one figure on the
force decided it was time to pre-empt the inevitable. This officer contacted the Independent Police Complaints’ Commission before an
official investigation had even begun, in order to warn them what to expect.
“When I found out that Detective Inspector Tontine (left) was leading the inquiry into a dangerous sex pest flitting between the city’s Chinese community and its homosexual subculture,
I knew immediately it was a recipe for disaster,” Sergeant Michael Floetry, that officer who initially contacted the IPCC, told Home Defence. “I discussed my fears with a number of
colleagues and we all agreed that having Tontine as the Senior Investigating Officer (SIO) on this was a recipe for disaster. Tontine’s one of the ‘old school’, which means he has a terrible
track record when it comes to cultural sensitivity. We have no expectation he would interview victims of crime in a compassionate or tactful way.”
Sergeant Floetry (right) went on: “It was clear to me the combination of skills such a potentially complicated case requires was far beyond the capabilities
of D.I. Tontine, a man who is happier hassling minorities or shouting ‘slags!’ at suspects as they run off into the distance than understanding the broad,
diasporic mix of a modern British city. These crimes in particular call for intelligence, an eye for detail and sympathy for those affected, something that's
obviously beyond a jowly seventies throwback who, back at headquarters, has been heard to express opinions like ‘girls on a night out are asking for it’
or drunk driving ‘isn’t a real crime, not if nobody gets hurt’.”
When considering Tontine’s history on the force and weighing up the balance of probabilities, Officer Floetry decided the best course of action would be to nip trouble in the bud before it
even began. Michael spoke with his contact at the IPCC and explained that, as future inquiries developed, complaints would inevitably flood in from the families of those assaulted and
members of the public who were intimidated or wrongly accused by the investigative team in the hope they might confess. Floetry also expected the IPCC to record numerous missed
opportunities for arresting the guilty party, inefficient liaison between national forces and allegations of institutional racism alongside the incompetence.
“It was best to give the Complaints Commission a ‘heads up’ about our inevitable organisational failures early on and get this looming PR disaster out of the way as soon as we
could, rather than being on the wrong end of an exposé later on when journalists realise we’ve messed up.” Sergeant Michael Floetry maintains. “If Merseyside Police get their
ducks in a row with the IPCC that gives everyone time to put a framework in place to deal with our forthcoming problems. Many issues are likely to appear before the Senior
Investigating Officer and his lackadaisical team eventually arrest the culprit, months down the line and entirely by accident.”
This ‘perfect storm’ around these crimes for the police is anticipated to include contaminated forensic work, an unwillingness to take those being
targeted seriously and a slapdash approach to paperwork that leads to key suspects repeatedly slipping through the net. The subsequent hullabaloo
will be the latest scandal to hit officers in recent years and comes in the wake of Plebgate, those 178 Metropolitan Police officers convicted of crimes
between 2012 and 2015, regular Tasering on a whim and the adoption of fake identities in order to impregnate nubile activists. Then there’s that recent
case where it took a fourth dead man turning up murdered in identical circumstances, with all the bodies dumped in one tiny part of East London,
before a connection was made between the deaths and the Met realised they had a serial killer on their hands.
“We’re grateful Sergeant Floetry has been proactive in this instance, snitching on his fellow officers before they’ve done anything wrong in the first place.” Spokeswoman Esther Saxifrage (right)
told Home Defence when we pressed the Independent Police Complaints Commission for comment. “Here at the IPCC we pride ourselves on a good relationship with officers out in the field,
however ineffective or slapstick they may be. Certainly the Senior Investigating Officer in this instance, Detective Inspector Tontine, is renowned for believing he isn’t paid enough to bother
doing a good job, especially now the Home Secretary has taken away all his overtime.”
“D.I. Tontine also tends to assemble teams just like him; old school macho ‘coppers’ who don’t like each other. Then he turns a blind eye to it when they lose evidence or
get in fistfights down the ‘boozer’,” Mrs Saxifrage goes on. “I think we’re right to start a file on him before the SIO actually does anything, and I always tell those officers I
speak to – before you submit a file to the Crown Prosecution Service, think about whether you’ve been negligent or corrupt at all along the way. On reflection, around 40%
of police realise they have committed some kind of crime themselves or been negligent with others, some of whom could be key witnesses at the trial.”
“It really helps us in the long-term, when this sort of thing is pointed out immediately or sooner.” Esther concluded. “Sergeant Floetry is one of the best grasses we
have - when it comes to second-guessing the uselessness of fellow officers he’s second to none. I wish there were more of them out there like Michael.” 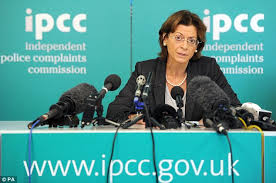