To Buckingham Palace in London, where protestors have come to voice their contempt for the behaviour of

certain individuals who have been bestowed knighthoods in recent years. Today’s complaints focus on disgraced

back his honour in embarrassed silence, joining the likes of unapologetic tax avoider Sir Philip Green,

“You can’t blame the Queen for it can you? She gets bad advice. I mean, what’s Her Majesty supposed to do? Hire a private

the assembled demonstrators at the palace gates, as he tried to help police placate the crowd.

“The royal family’s policy is to issue honours in good faith, on the basis of all available evidence at the time, then withdraw said

honour later should there be unforeseen circumstances; the revelation of a crime against humanity for example.” Mr Sow goes on.

“This accolade rewards the very cream of society; recognising outstanding achievement in sport,

cinema, television, and other leisure activities. Yes, in recent times we’ve also focussed on the

financially successful, but that’s because wealth generators need a regal pat on the back too!”
At this point, Charlton struggled to be heard when confronted with chants of “you aren’t the 1% are you?” from onlookers.
“Alright, alright, I’ll admit it.” Mr Sow (right) conceded. “For the past decade or more, knighthoods have been seen as another reward
for the super-rich, many of whom turned out to be amoral or corrupt. But I still think net worth, total assets, and overall power are useful
guidelines when gifting this sort of laurel. Remember, not everyone who was bequeathed a knighthood this century tourned out to be
a conman, engaged in illicit activity, or just plain evil.”

Everyone loves watching him hang out with the monkeys. God, I hope those three turn out to be purer than the driven snow.

When HDUK subsequently approached the Queen’s advisor at the Commonwealth Office for a statement, we were told there was

“categorically no link” between the award of a knighthood and believing you were above the law, or going on to commit acts that

would mean any ordinary citizen was turned over to the police, or perhaps run out of town. They also claimed that any evidence to

the contrary was either hearsay or “entirely circumstantial”.
Yet many still believe that receipt of a knighthood, supposedly in recognition of a “significant contribution” to British national life, can trigger moral breakdown, leading to greed, conspicuous consumption and occasional tax exile. Indeed, many note that when the honorific is conferred, in what has come to be known as the “ceremonial dubbing” followed by a presentation of insignia to the knightee, that seems to be the moment when they go off the rails. New knights believe this honour renders them “the big man”; untouchable and sanctioned by the highest power to do whatever they like, with no fear of the consequences.
“Being known as ‘Sir’ no longer conveys the respect it once did, not in the pre-Saville era.” Media ontologist Rutabega Cylert told us
in a windowless basement where it felt like the walls were closing in. “The Queen’s once-impressive repertoire of accolades includes
too many examples of what advertising calls “sullied brands”. Take Sir John Scarlett for instance. History will remember him for
concocting the ‘dodgy dossier’ of made up stuff about Saddam’s mythical ‘Weapons of Mass Destruction’, something that was used
to justify the Iraq war. Or former Scotland Yard Commissioner Sir Paul Stephenson [right], who failed to investigate the phone hacking

scandal, even though it was clear to a five year-old crimes had been committed.”

Miss Cylert went on: “If the current rate of reputational decline around knighthoods continues, soon we’ll only have Mick Jagger and Elton John

left. I’m aware the Queen used to be horribly embarrassed when she watched Match of the Day and saw Sir Alex Ferguson harangue innocent

linesmen, so it’s probably a good thing he’s retired. My sources at the palace tell me they’re currently keeping a close eye on Sir Alan Sugar,

in case he turns out to be next. They suspect Lord-Baron Sugar could blow a fuse any second and

attack or even kill a bunch of people. It’s a massive fear.”

“Still, the Dames seem to be doing alright for themselves.” Rutabega mused. “Maybe we should

make women knights instead. That might solve the problem.”
Reports that the Queen was “tearing her hair out” after being forced to rewrite the next honours shortlist and remove the likes
of Stuart Hall, Coronation Street’s William Roache and a number of unnamed billionaires who keep massive pots of wealth in
offshore holding accounts, could not be verified as Home Defence went to press. 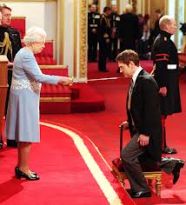