The rural communities and rustic outposts of Britain, where Home Defence comes to find out the truth underpinning

the recent rise in unspecified ‘big cats’ spottings, wherein yokels and the fucked up are calling police stations and

“It were definitely a panther.” Unreliable witness and very-pleased-to-be-interviewed farmhand Inky Flair (left) told HDUK over some

homemade scrumpy. “I saw a lamb carcass and some worried sheep that same morning. There’s no doubt in my mind.”

“I was beside myself - it felt like an evil presence all across the land. I spent the afternoon having a few drinks to steady the old

nerves, as you do, and then I went out to bring the livestock in. That’s when it appeared to me, as if by ruddy magic.”

of tooth and claw, out on the prowl. I knows a panther when I sees one.” Inky asserted. “I didn’t get any real evidence because I

haven’t a flash on this camera, and I was also running for my life while screaming. In the end I must have slipped and hit my head because, when I woke up, my prize sheep Daphne, was nibbling at my earlobe.”
Soon we arrived in the Gloucestershire village of Bamfurlong, where Mr Flair’s alcoholic friends joined us at their local pub, The
Size-Zero Model (right). Once there Percy, a typical bumpkin type, described his own, terrifying experience.
“I were laid flat out, on the bonnet of me tractor, staring up at the stars and chain-smoking reefer.” Percy told the assembled
company. “When a great, big, humungous creature bounds past, scaring the wits from me.”

apart from maybe a Labrador. My eyesight’s not great, but I reckon it were a lion.”

With big cat sightings as far apart as Scotland and Pembrokeshire in Wales, as well as reports of the Dagenham Panther, Beast of

Barnet and Crystal Palace Puma around London, experts maintain there can only be one explanation. They say bored non-entities

and the severely messed up are projecting a love of the ‘big-cat-on-the-loose’ myths onto half-glimpsed images, then using their

testimony to convince newspaper editors to cover these half-baked theories. The reports then fail to be picked up by more reputable,

national sources, for whatever reason.
Yet, with recent coverage of clearly barking Somerset landowner Sir Benjamin Slade and his antics, it’s time, once again, to call for the
authorities to investigate what usually turns out to be an escaped pet or abandoned cuddly toy. As you may recall, Sir Slade sounded
the alarm on his country pile when a manservant took a blurry photo of something black by a cluster of trees. A flurry of interest was
unleashed, with Sir Benjamin warning dinner guests to be on guard if entering his land, for fear of a creature that, if you squint, could
possibly be a cougar or something.
“It’s a cyclical thing.” Government Inspector Tantoo Reframe told Home Defence when we asked. “Sightings of this kind tend to
coincide with a good batch of LSD in the area, or the increased proliferation of some new designer drug, usually distilled from fertiliser.
We also noticed an upturn in sightings a few years back, after the drinking hours were relaxed.”

“When I started on this job I was as naïve as anyone.” Mr Reframe goes on. “Spending months exploring small-minded and

inhospitable corners of the UK, all because of some village idiot who thought there was a leopard living in his allotment. After a

while I realised the claims of ‘confirmed sightings’ were only ever ‘confirmed’ by a mate of the witness, who was also

ever seen’”. Tantoo recalled. “Of course, the prints were made by some local children with a stick. Bloody in-breds.”
Yet interviews continue to proliferate with hungover men and women who “can only tell you what they saw”. Witnesses invariably
describe glossy, muscular, otherworldly creatures who dive into the undergrowth when a camera is being readied. Hundreds of
sightings have been reported in 2013 already, by the lonely or ridiculously stoned, a pattern that has led to the emergence of
self-styled ‘Big Cat investigators’. One of these is Frank Tunbodge (right), a man who has spent the last decade of his life out on
the moors, trying to track down the fabled ‘Beast of Bodmin’.
“I’m sure it’s out there in the wilds. I’ve no idea why I’m sure, but I am.” Frank recently told the Devon Advertiser. “So far I’ve
caught nothing in these homemade traps, aside from my own foot once by accident, but I won’t rest until the monster is found
and proved to exist, once and for all.”
“Yon beastie won’t escape me.” Tunbodge claimed. “I got great footage last year although, on closer inspection, it turned out to be of an overfed housecat. Before that I filmed a poacher. The time before that, a tramp.”

Meanwhile cranks with a screw loose on the Big Cat News (bigcatmonitors.co.uk) website have today published

‘evidence’ of encounters in the form of grainy, long-range photos of what’s clearly just a Siamese walking along a wall. As

a helpful service, they also offer anyone similarly gullible “commonsense advice from respected literal sources”, while

occasionally espousing some kind of pissant cover up, yelling “the government needs to take this problem seriously!”

This lunatic mindset is also responsible for the recent dispatch of an armed response unit by helicopter when, for close to

eight hours, marksmen scoured a field in Somerset, finding only a cardboard cut-out of a tiger - apparently left by

pranksters - and one single, confused badger.

In the wake of increased concern about such hallucinations, visions, and manifestations of the imagination, local police

across the British Isles have formally appealed for the public to “shut up and leave us alone.” 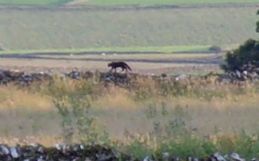 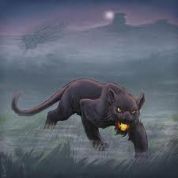