Home Defence UK
A Symptom of a Greater Malaise
SPECIAL REPORTS
with Al Likilla
ALL SPECIAL REPORTS:
Stock Market Wound Down For Good
“It Was All Just A Terrible Mistake” Says Cable
01/12/11

The London Stock Exchange where earlier today Vince Cable, the coalition secretary for

Business Practices and Economic Euthanasia, went on a surprise walking tour of the trading floor.

Once there he told gobsmacked stockbrokers enough was enough, and that from next Wednesday

the government would be gradually closing the operation, returning the concept of stocks and

shares to history where it belongs.

“It had gotten beyond a joke.” Cable (left) told Home Defence, shortly after

leaving the square mile. “What was once a pleasant way of passing the time and making a bit of cash on the side has

become nothing more than a means of evaporating billions in an instant. And believe you me, this government can do that

for ourselves without any outside help.”

“I’m tired of rich individuals and institutions phoning up to ask why their investments have suddenly become worthless.” The

Business Secretary went on. “The Catholic Church in particular are a massive bunch of

cash. That was money he could ill afford to lose, what with all the court cases and pay-offs.”
“But I can confirm his lobbying has been successful. Now that shares don’t go up as well as down, apart from maybe Google’s,
the whole system seems unconvincing and pointless. We’ll be finishing up work and clearing out the Paternoster Square
headquarters next week, going on to use the building as a dosshouse for homeless ex-brokers, or possibly a nice arboretum.”

largest in the world. Formed in 1801, the LSE came to prominence in the 1950s when those in the know began to realise the

system might be worth a punt. When women and the foreign were allowed onto the exchange floor in 1973 this place, deep in the

heart of the City of London, became more than a minority interest for shouting morons in braces. There followed twin advances;

the creation of the FTSE 100 index of leading companies in 1984, and the deregulation of the financial markets two years later by

the recently-deceased Lady Thatcher.
Suddenly traders were able to deal in shares around the world from the comfort of their desks, and for much of the next
quarter-century the markets boomed. Indeed, at the time of its demise, the London Stock Exchange continued to raise the
profile of three thousand businesses across sixty countries, inspiring everyone from small-time investors to traders in hedge
funds. Yet the signs were there that this virtual marketplace had jumped the shark, with most of these buyers and sellers
comprising discredited institutions like banks, pension funds, churches and insurance companies. Many of them have since
watched their moolah disappear instantly, like rock cakes at a coffee morning.
“Those of us in the know saw it coming.” Market analyst Janus Billy-Goat told HDUK earlier. “The idea that ‘investing in the
market’ might be a good idea has become something of an in-joke for us experts. The whole idea no long holds water, not
since the set-up came to be manipulated by immoral idiots for the financial gain of the few at the expense of the many.”

move away.” Mr. Billy-Goat went on. “Of course, in the months since the initial crash it has become clear that our ‘financial markets’ are little

more than an overgrown Ponzi scheme. Don’t get me wrong, the system worked once, back when people believed in the free market and

before ridiculous bubbles in things like dotcom companies, sub-prime mortgages and derivatives. Derivatives, for the uninitiated, are massively

over-valued and made up things that are so complicated ordinary people can’t see they’re basically a scam.”

“I think the time has finally come to shoot this thing in the head and walk away.” Janus concluded.

Other elements that have impaired the Stock Market’s operation include the ongoing Eurozone crisis, unsustainable global growth, China

buying shedloads of Western currency, enormous debts, climate change and plummeting ratings for The X Factor. In the end the whole

thing was seen as a liability to Britain’s role internationally, and countries across the world are expected to follow the UK’s lead, shutting

their stock exchanges to prevent more damage. Meanwhile Cable has been inviting ideas from the general public, working to a process that

might replace the defunct one.
“We thought about getting a giant set of abacuses in, or printing credits to represent a public floatation, although obviously these
‘shares’ would remain the same value forever.” Cable confirmed. “I got an email from a young man today suggesting we procure sea
animals to represent the oil, chemical and phone companies and so on, then throw them in a big tank and see what happens. I
thought that was very innovative.”

into the buying and selling of commodities such as gold, lead or processed meat. Come the final days of the British stock

market next week, all corporate and individual shareholders will be reimbursed for their losses by the coalition government, at

an estimated cost to the taxpayer of two billion pounds.

Following the announcement that the concept of financial markets would soon no longer exist, market reaction was negative.

At close millions had been wiped off the FTSE 100 and shares fell an average of 8% in value, their biggest drop in nearly a 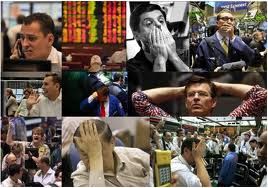 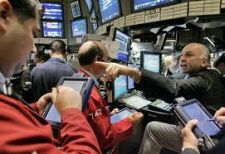