“Hello Croydon’s massive.” The ConDem No.2 cried to the cheers of flabby youngsters, all briefed in advance by

representatives of the IFOCE (International Federation of Competitive Eating). “Today heralds a new era of

consumption for the talented few. Every one of you could become part of a generation that makes a big

difference, showing the world Britain can chow down with the best of them.”

“From next month,” Clegg continued, “New subsidies will be available to all, as well as coupons to be redeemed

at Greggs or Burger King. The brightest of our gobbling hopes will then be able to access youth club-style classes where they’ll be taken through everything that is required for the upcoming Gluttonbrit Championships, to be held right here in South Greater London. Any sponsors listening who wish to get involved, such as KFC or Krispy Kreme, please give Vince Cable a call.”
This announcement is one of a number of short-term initiatives aimed at ensuring the lower classes place
every penny they claim back into the struggling UK economy. The ‘GluttonBrit’ phenomenon is also
expected to provide the masses with much-needed distraction through a reality show pilot, now that the
likes of X Factor and Strictly Come Dancing have become passé.
It is expected that encouragement of food-related over-indulgence will be welcomed by all, particularly
since the Church of England has reclassified it a ‘lower-tier sin’ following pressure from David Cameron.
This means that gluttonous behaviour now sits below usury but just above bumming in the church’s
hierarchy of evil. Indeed, today marks the moment endless eating moves from something society frowns
upon to an acceptable lifestyle choice, with all foodstuffs for the upcoming GluttonBrit heats expected to
be sourced locally. It also means the chefs and waiting staff attending will have to hold valid British
passports. Although immigrants from within the EU are allowed to work the tournaments, their
involvement is strictly limited to disposing of fatalities when their stomachs burst, or cleaning out
the reinforced steel ‘vomitarium’.

Following the moving conclusion to his speech at the Community Centre, Nick Clegg embraced a nearby

fat child and invited his tearful father, Keith Vajajay (left), to the stage. Once there Keith relayed the moving

story of one family’s struggle.

living they told him off and sent Aaron home with a flea in his ear.” Mr. Vajajay lamented.

At this point Michael Gove, the Secretary of State for Education, interrupted the talk by orchestrating a

choreographed wave of boos that passed through the audience.

“Aaron was so upset.” Keith went on. “The kid’s been working toward this all his life. My son’s got a hunger

the likes of which I’ve never seen before, and neither have his dinnerladies. You should see little Aaron go

down on a jelly, I’m literally frightened. But I’ve learnt to start thinking of his overwhelming impulse as a gift.

We’re so grateful to that nice Mr. Clegg for giving our son a chance.”
The following day televised heats for the likes of Aaron were announced and will take place around the country, from Hull to Torquay. Once there competitors from five to eighteen will run the gamut, with the most omnivorous young ‘Gurgitators’ tutored at special Academies and funded by parental involvement as per the Prime Minister’s ‘Big Society’ chimera.
Inside these Schools of Gastronomic Excellence pupils can take normal lessons (aside from Physical
Education, for obvious reasons) along with classes in ‘preparatory consumption’. This groundbreaking
initiative tutors kids in the history of Major League Eating, how to avoid ‘reversal’ (vomiting), and the
best methods of preparation; from increasing stomach elasticity by drinking pints of water, to chewing
endless gum for their jaw muscles.
The lucky few are also expected to develop a taste for the more unusual foods which have become
a staple of the competitive eating circuit including oysters, whole beef tongues, asparagus, sushi
roll, cow brains and big piles of wiener. Gaps between meals will be devoted to watching archive
footage from some of the biggest names in gluttonous eating; men like Don Lerman, Takeru
Kobayashi and The Doginator (right).

The benefits of this undertaking are expected to trickle down in the form of jobs, both in the food industry

generally distract the general public from their miserable lives. But not everyone is embracing the scheme

“The GluttonBrit thing is all very well, but what the coalition’s money-saving policies haven’t taken into

account is the health impact on future generations. Boys and girls are being encouraged to stuff pies, hot

dogs and whole sticks of butter down their gullets as fast as they can before the bell sounds. As any

puking, a bunch of fucked digestive tracts and a whole lot of drool, not to mention the long-term physical

effects of endorsing obesity. It’s probable the DemCons don’t care too much as only poor kids will be up for

this, but unless we prevent the underclass receiving too much appetite assistance, thousands of fat chavs

could drain the NHS for decades to come.”

Yet David ‘Call Me Dave’ Cameron cast off such concerns at Prime
Minister’s Questions, maintaining that Britain would regret it forever should she turn down the
opportunity to lead the world in such an exciting field. Cameron also confirmed the government would
apply to the International Olympic Committee, aiming to have Competitive Eating recognised as a
sport in time for London 2012.
“Besides,” Cameron went on, as Tories and Liberals yelled out their support around him. “We ignore
the billions alcohol abuse costs the taxpayer each year. Why shouldn’t we have the same attitude
when it comes to these fattened human calves?” 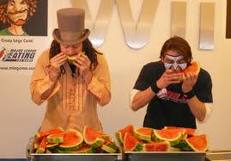