England, November 2005, a country witnessing a harsh clampdown on the centuries-old tradition of paying 'a

penny for the Guy' thanks to the efforts of the Home Secretary. In his latest piece of anti-terror legislation,

recently forced through parliament, Charles Clarke has empowered police from Plymouth to Carlisle to be on the

from honest citizens. Any funds discovered to have been raised by this method will be confiscated by

gun-wielding officers, the culprits led away to detention centres before the bomb squad is called in to conduct

controlled explosions on any 'Guys' found in prams.

"We can no longer countenance those who would use terrorist imagery to raise financing for
inflammatory acts." Clarke told BBC News 24 earlier today. "Anyone caught with an effigy of this known extremist,
whether they are five or fifty, will be arrested and miss all the fireworks. I don't care if the terrorist act they exploit
was committed five centuries ago, this government will never again permit British civilians to promote the likes of
Fawkes and his evil cohorts. I've even heard youths singing, We See No Reason, Why Gunpowder Treason, Should
Ever Be Forgot' Well I know plenty of reasons. By remembering these nefarious deeds you offer succour to
terrorists. That's why I'm telling the public, now and unequivocally - time to forget!"
The Gunpowder Plot was planned by Robert Catesby in 1605 who formed a gang of sympathetic men upset at the persecution of Catholics by the British government. This group included Guido Fawkes who functioned as a proto-suicide bomber charged with initiating the actual explosion, a bit like Don Cheadle in Ocean's Eleven. Drawings from the time show the plotters possessing Jimmy Hill-style chins and silly moustaches which, historians speculate, may have been another reason they felt cast out by society. For some reason the group thought blowing up the Houses of Parliament would turn England into a Catholic country. Unfortunately they never had a chance to test this bonkers theory, as a letter one plotter sent to warn his mate in government was intercepted and shown to King James I, meaning the authorities were ready on the night.

By the early hours of November the 5th 1605, Guy Fawkes had rolled thirty-six barrels of gunpowder into a

cellar beneath parliament, but before he could detonate the load a group of guards broke in and asked what he

was up to. Fawkes tried to blag it, claiming this as a regular middle-of-the-night delivery and the barrels
actually contained sugar. Guy then pointed to a wall behind the men, shouted "Oh my God, what's that?"
and attempted to run away. It didn't work, Fawkes was captured, tortured and executed.

As is the way with terrorist atrocities, successful or otherwise, the plotters' scheme had exactly the opposite

effect to its conspirators' intentions, resulting in the implementation of ever more stringent anti-Catholic laws,

revenge attacks on Priests, and a country in the grip of fear. During the months following Fawkes' failed plan the public saw violent Fenians everywhere, with men who looked a bit Catholic carrying barrels avoided in the streets and on public transport.
For two centuries after the plot it was a likeness of the Pope burnt by revellers every 5/11, but in 1806 the
Vatican contacted the British government to say the Pontiff found their tradition "a bit unnerving". The King
responded by decreeing an effigy change, and from then on it was Guy Fawkes who was melted annually.
Two centuries on and 2005 sees the last traditional Bonfire Night if our government has its way.

Typical of these ankle-biters was Brett, a ten year old urchin from Hornchurch recently targeted by Scotland

Yard's anti-terror branch for wheeling his man-size doll around the bus station and pestering commuters.

"It's not fair!" Wailed the snot-nosed child. "The filth called me a terrorist sympathiser and took my money, but

I don't even know what that means. It was only some old crap I pulled out of a skip bundled into the shape of a
man.

I'm rubbish at drawing, so the bit of cardboard with a face on it looked more like Busta Rhymes than that Fawkes

bloke." We passed him an embroidered handkerchief so Brett could wipe himself before continuing. "Me and my

the bonfire, but now we can't afford anything. I don't even know what this Guy bloke did. My dad says history's a

load of old nonsense, but I think the government should at least pay back what I would have got."

Unfortunately, when we contacted the police to explain Brett's plight, we were told his funds would not be

returned. Indeed, the Bank of England has frozen the child's pocket money until such time as he renounces

terrorism and says sorry.
This Bonfire Night many will find themselves similarly unfortunate, with thousands of police patrols across the UK ready to disperse firework parties by force if they suspect terrorist images to be present. Meanwhile children breaking the new laws will be subject to instant ASBOs and their parents arrested.
Unable to get hold of Charles Clarke directly, HDUK met Home Office spokesman Quintin Parven to ask if this wasn't a ridiculous overreaction on the part of the government, out of all proportion to a quirky tradition originally started by entrepreneurial schoolchildren hoping to raise cash so they wouldn't have to go up a chimney. In fact, Bonfire Night as we know it, has nothing to do with extremism at all, particularly when you consider the original target of this yearly burning was the Pope.
"But that's okay!" Asserted Parven, spectacles bouncing up and down on his face. "By all means
set fire to the Pope! Dress him in a silly hat and robes while you're at it! He's no terror icon. What
we won't countenance is British citizens publicising reprehensible blaggards like Fawkes for fun
and financial reward. I don't care if the people doing it are eight years old, and thick."
Quintin went on. "No one knows why you're supposed to give money to louts for building a Guy
anyway, and it's time this practice was stopped. Last year they weren't even asking for pennies
where I live, instead a gang of yobs demanded ten quid otherwise 'I'd get a bash'. Fawkes and his
misguided followers simply cannot be allowed the oxygen of publicity in the current climate. The
Home Secretary doesn't care if Fawkes gets killed at the end or how many children he has to
make cry with these laws. This archaic practice has to be stamped out once and for all. Remember;
always have an adult on hand when using fireworks, lock pets indoors for the evening, and don't
mention Guy Fawkes unless you want to be locked up indefinitely without charge. That is all."
1 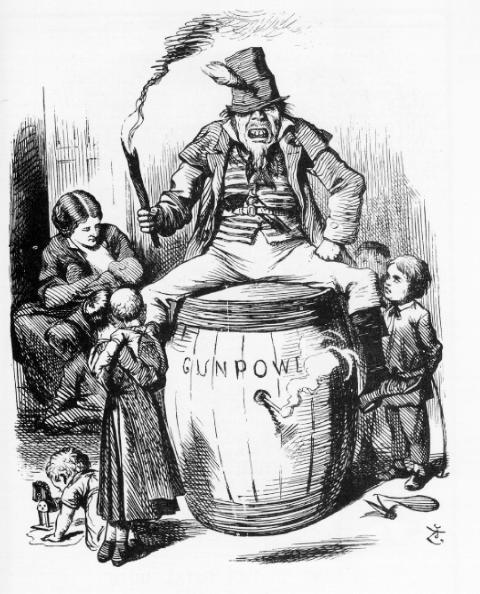