The M1 outside Milton Keynes. On this dull Spring day, Home Defence sits beside

European people in the twenty first century. And we didn’t have to wait long for them

to appear, those hundreds trudging down the hard shoulder, passing lines of

gridlocked commuter traffic. These wandering pilgrims are hoping to make a new start
in northern England, where benefit allocations will cover the cost of private housing, but could their desolate
pilgrimage all be in vain?

of Liverpool’s Moss Side.” Mother of three Asma Topknot (left) told us as, nearby, an inner city boy pointed to a cow and asked his father

what it was. “With year-long waiting lists for Council Houses in the boroughs where we've lived all our lives, and landlords putting up rents

above the funding we can get from government, we found ourselves evicted from the two bedroom hovel in a gang-infested part of Camden

we once called home, and forced to join these folks on their northward migration.”

As we talked, scores of families passed Mrs Topknot, the less able-bodied in covered wagons, battered caravans or wooden carts

dragged by mules, while couples pushed exhausted children asleep in wheelbarrows, the leads of mangy dogs attached to their handles.
“Wherever we end up, I only hope we get a roof over our heads and the children can enrol at school without being labelled
‘pikeys’ or having the shit beaten out of them.” Asma mused. “I understand the government needs our housing benefit, to pay
for their new range of Trident Nuclear Submarines and fund tax cuts for the rich, but it’s a shame I had to pull my children out
of a school they loved, making them leave their friends and travel all this way in the hope there might be a decent room and
someone to welcome us.”
“What there won’t be is affordable childcare, jobs, or a food bank within walking distance.” She asserted, gathering up her
offspring to join the footfall once more. “I know that because I looked it up myself.”
This mass dispersion of former Londoners, or ‘Londies’ as they've come to be known,  travelling northwards across the East
Midlands ‘dirt-bowl’, is the most visible effect of the coalition’s welfare overhaul. It takes place as others are put into bed and
breakfasts for the long-term, while those with spare rooms will be forced to let them out to anyone offering a bundle of used
fivers, or face punitive measures and possible incarceration.
But as HDUK watched this human river consume donated food items from farmers, along with whatever they could forage, all honked at by passing 4x4s and forced to camp on the side of the motorway at night in plummeting temperatures, we began to see why some might call these policies ‘a little misguided’.

“Poppycock, nonsense and balderdash!” Cabinet minister for internal migration and Old Etonian Chuter Blare (left) exclaimed when we put it to him.

“I have no truck with the idea that moving the poor out of affluent areas is ‘social cleansing’. And even if were, what’s so wrong with being

‘cleansed’? My wife pays good money for that sort of thing on her regular spa weekends.”

“Some elements of the press make it sound like this is compulsory.” Mr Blare went on. “But these commoners have a choice. They’re only going a

and access to an indoor toilet. If they don’t like that they can stay in London and live on the streets, as so many choose to these days.”
“Five hundred pounds a week in benefits is massively generous, however many children you have.” Chuter noted. “This is compassionate
conservatism at its very best, and a small price to pay when London housing estates have become so sought after, with foreign money
arriving to buy up ex-council houses and price out the long-term residents. They ought to be a bit more British about this and look on the
bright side. Many working people would give their right arm to be out in the countryside, breathing fresh air and having a great big
adventure. Plus they get to live with their own kind on arrival, which is where they belong. Southern migrants have a lot in common with
the northern working classes - they don’t have a pot to piss in either.”
Indeed, some of these ‘Londies’ have maintained a stiff upper lip in the face of the 2010s ‘Great Depression’, assuring their kids they would
find homes, work, decent football teams, friendliness and a fast Broadband connection on arrival and that, if anything, the hopeless
inadequacy of the government’s ‘emergency fund’ was a blessing in disguise, since it meant they wouldn’t suffer ant false hope. Their
journey was expected to ‘build character’ and get the children far from those rich people moving into their old post codes, looking down
their noses at the poor while spoiling the little ones with toys and cake.

Studying photocopied maps and complimentary compasses given to them on eviction, some of this wagon train located their

settled, these families tried not to let the lack of running water in this ‘benefits ghetto’ get them down, making fires across the

unfamiliar land instead and trying to fill in applications for social housing by their light. Here HDUK caught up with Asma

“It’s not as bad as I thought.” She smiled, struggling to bathe her youngest in a metal tub filled with cloudy water. “At least us

Londies are all in it together. When summer comes I might be able to find seasonal work in those fields you can see, just west

of here.”
After scanning the adjacent farmland, Asma went on. “This is only temporary and I’m sure we won’t be forgotten.” She concluded as, a few yards away, children from a local estate hurled pebbles and abuse. “Meryl over there's already secured a place for her young ‘uns in a hostel, and apparently Bradford YMCA will take some of us in. It’s at times like these I’m grateful to live in the first-world.” 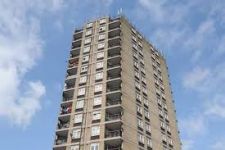 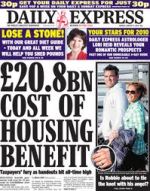 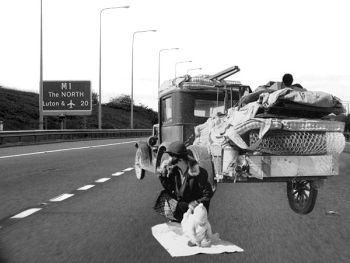 Some of the luxury housing these 'Londies' have been forced to give up.
1