To Spalding in Lincolnshire, where the fallout from the so-called ‘Twitter Vengeance Death Frenzy’ continues to obsess the media, with

the accused finally being granted their day in court. This controversial case was fast-tracked to trial following public outcry over the

short-term imprisonment of men who had snuffed out the life of Olivier Cockenlocker (pictured right), an individual who quickly became

‘the most reviled man in the country’ thanks to a series of offensive posts on social media; content Cockenlocker (27) invented in the

hope it would garner the attention he apparently craved.

“That was their house, the one over there.” Neighbour Olga Birthpool told Home Defence during a tour of the Spalding area, pointing to a burned out row home with ‘die scum’ painted across its blackened exterior.

“That’s where they came when the worldwide web got full of horror and badness. They say a group of men travelled down from Wisbech to put a stop to it.” Mrs Birthpool confided. “I

watched the door get kicked in and saw them storm past his terrified mother. Inside they found Olivier online, no doubt making up his bloody evil stuff. Then I hear the mob seized

the bugger, took him outside, tied a rope around a branch of their horse chestnut tree and hung him by the neck. I was horrified at the time, but when I found out what Oliver had done I

said to my husband, I said: hanging’s too good for him. And it was, most likely.”

Olga’s sentiments were shared by millions across the land, fuelling a climate of murderous fury for anyone who says really horrid stuff in tweets, Facebook posts or any virtual forum

accessible to the public. Recent months have seen prison sentences returned for Internet offences like drunken misspeaking, tasteless attention-seeking or misuse of irony, a trend that

began with the six months handed down to Paul Chambers (left) for joking he would bomb Robin Hood airport, or Liam Stacey who was
sentenced after mocking Fabrice Muamba’s on-pitch cardiac arrest, jibes Stacey (right) couldn’t recall because he was “so shit-faced he’d no idea” according to his defence
counsel.
Yet its the moralistic coverage of self-confessed ‘trolls’ that has increased of late; men and women incarcerated for offences like making death threats to feminists, calling for
Muslim babies to be drowned or endorsing the knife murder of teachers, in a feeble bid for online notoriety. These cases have resulted in a situation where the British public are
increasingly comfortable endorsing revenge-focussed mobs who break into the houses of miscreants and just up and kill them, without so much as a by-your-leave.

“What we’ve seen, in legal terms, is an increased use of the 2003 Communication Act to prosecute unpleasant individuals, men and women who think

they can get away with saying things that are clearly beyond the pale, even if they delete the tweet immediately afterwards.” Detective Inspector Wattle

Funnel (left) told HDUK, a policeman whose Lincolnshire force came in for minor criticism when they failed to arrest members of the so-called ‘Cockenlocker Lynchmob’ for weeks after Olivier’s

death, despite witness identification and everyone knowing where the killers lived. “What this piece of legislation gives the establishment is an ability to arrest people for typing things of a grossly

“This law actually came about as a response to tabloid hysteria over social media insults suffered by the royal family, politicians, TV presenters, investment bankers and other much-loved public

figures.” D.I. Funnel went on, growing increasingly self-important. “Utilising this legal infrastructure to the full, we can now take obnoxious trolls into custody for as long as is deemed fit, then

expect the courts to come down on them in a way they wouldn’t with some bloke shouting immigrants should be shot, or how he’d love to rape a particular Member of Parliament, while drunk in

a bar.”
“In this particular instance we are building a case that would undoubtedly have seen Cockenlocker put away for a very long time. Unfortunately the vigilantes got in there first.” Wattle
noted. “While I don’t agree with those coppers who tell reporters they were grateful for a job done at no cost to the taxpayer, or members of the public who say the bloodlust-fuelled
mob ‘should be given a medal’, I certainly stand by the judge’s remarks, made when sentencing those men, earlier this morning.”
Indeed, during his brief summing up, Lord Justice Saucy (right) explained that, although the guilty verdict had been delivered on charges of capital murder, he was minded to give each
defendant no more than a few hundred hours of community service. The judge justified his approach by claiming the guilty men had taken out “the most reviled individual in the UK” and
that, given the chance, Mr Justice “would have liked to get my hands on that little shit myself.” Saucy claimed it would not be right to send these vigilantes down for “a single instance
of hot-headedness”, since prison only puts first-time offenders at risk of negative influence from hardened cons including “bank robbers, starving shoplifters and Andy Coulson”.
Olivier’s mother Mildred could be heard weeping in the public gallery as the Judge ran through a summary of Cockenlocker’s more upsetting posts, warning those in attendance they could be rendered nauseous by what he was about to say. To gasps of astonishment, the Judge relayed the lynched man’s description of national sweetheart Prince George as “nothing special, just a pointless baby”, his derision of English gold medallists at

when I was a kid”. These evil statements were then followed by his coup de grace; a ten thousand word Facebook note, wherein Cockenlocker ties himself in knots attempting to defend dead

His rambling testimony begins by reminding readers of the millions Saville (right) raised for vital hospital equipment, claiming that many of the patients who benefitted would have been happy

to get fingered by a famous television presenter-slash-Disc Jockey if it meant receiving the best of medical care. The disgraceful piece adds: “all the moralists forget there’s a reason he got

but, by way of mitigation, “brought light entertainment to a whole nation every Saturday teatime”. Olivier tries to prove his point by reminiscing about a

with no mention of being lured into a dressing room or any lowering of “trackie bottoms”. Cockenlocker ultimately concludes: “in my, admittedly limited,

experience, Saville was nothing but a force for good”.
On reading this note, most commentators decided death by lynch mob was exactly what the author deserved, and there was nothing anyone could do about it. Indeed, aside from a
few grumblings from the anti-censorship community (who have since gone quiet), the only dissent came from Olivier’s mother. Since no one else was speaking to her, HDUK caught
up with Mildred Cockenlocker outside court, while her son’s murderers were celebrating their freedom by spraying bottles of champagne on cheering crowds nearby.

“I don’t see why I’m the only one who thinks the cold-blooded murder of my son is a bad thing.” Mildred told us. “I realise he said some morally

questionable stuff in his time, but if Oliver had argued to someone’s face thatt would have been fine. This verdict is all about middle class hysteria regarding what can and can’t be said

on the Internet, with the public as a whole whipped up into a righteous frenzy by the press. It leaves so-called trolls open to vilification, prison sentences and, in my son’s case, an early

“I knew our government were keen to limit freedom of speech, but I never expected anything like this.” Mrs Cockenlocker went on, bursting into

tears. “How is it right that a Rod Liddle or Richard Littlejohn can insult the appearance of ordinary women in their columns, or some gang of youths

tell a teenage girl she’s ‘ugly’ on public transport, but when someone offends the world via Twitter a swat team immediately descends on their house

to slap the handcuffs on?”
Mildred was then overcome by emotion, having to be led away from the ecstatic relatives of the exonerated lynch mob and sent home for the day. Sadly the bereaved mother is unlikely to
see much change in her lifetime, with legislation currently being tabled to parliament that will criminalise trolling, particularly if done by the unemployed or those on benefits. This is expected
to lead to sentences of anything up to five years for dissing the likes of Rebecca Adlington or Dom Joly. Indeed, as Home Defence was going to press, reports were coming in that faded
comic Frankie Boyle was in custody for his own safety, having described London Mayoral Candidate Tessa Jowell as “a rough old dog” and coupled this unforgivable insult with a
borderline-obscene hashtag. 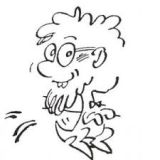 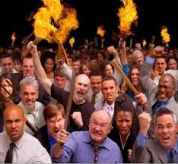 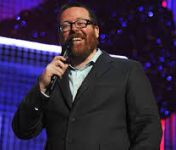