To Westminster, where cracks have begun to show in the Conservative-LibDem

coalition, formed back in May in a blaze of optimism and aimed at governing

the United Kingdom effectively for the next five years.

Initially Tory P.M. 'Diddy' David Cameron and his deputy, the Liberal Democrat
Nick Clegg, were all smiles following their historic agreement to cooperate, sharing both government
and the historic residence of the ruling party; 10 Downing Street. However, this cohabitation, which
started out amicably when the two men moved in together at the start of June, soon became frosty
as wives and children followed, dragging with them wardrobes of clothing, multiple IKEA wall units,

and crates full of knick-knacks or geegaws.

“There’s just not enough space for it all!” The Camerons’ cleaner for the past decade, Betty

Convalescent, told Home Defence in return for some tasty biscuits. “At the start of this coalition

period Clegg and that nice Mr. Cameron tried to treat it all as one big adventure. I even heard the

Prime Minister say: ‘This is just like those times we used to bunk down together at Eton Cleggy,

She went on. “At one point they used to stay up every night and talk about policy in excited

tones, or share memories of the look on Alistair Darling’s face when he was ousted from

office. But then Miriam and Samcam came along, with their respective ankle-biters in tow, and

everything went downhill from there.”
Indeed, at first it was agreed by the men of the household that the amount of space each would be assigned within 10 Downing Street should reflect the proportion of votes won by their respective parties. Unfortunately Miriam González Durántez, Nick Clegg’s fiery Latin missus, soon objected to the LibDem couple having to share the smaller bedroom. Meanwhile the Clegg’s three Spanish children; Antonio, Alberto and Miguel, were unable to mix with the Camerons’ brood who were said not to understand their accents and found the family’s devout Roman Catholicism “dead weird”.
In addition, reports persist that David Cameron’s wife, the ever-fragrant Samcam (right), spends much of each
day sulking about not having a kitchen to herself, resents the way her cleaner is left to do all the washing up
and repeatedly tells David he has to “chuck in this bloody job soon so we can all go back to Notting Hill”.
Political watcher and Clegg confidant Shabba Turncoat thinks the situation can only get worse:

“Everyone under that roof has tried time and again to reconcile the families who live there. Nick agreed
to abstain from a number of key domestic issues, while the Camerons said they would give ground on the
question of everyone tidying up after themselves and whether there should be one of those beaded curtains
in the reception doorway.” Mr. Turncoat explained to HDUK. “But there remains a growing tension in the
house and, in my opinion, the number of domestic flashpoints can only increase. It feels like there are always kids arguing about

whose go it is on the wi-fi, Miriam hogs the clothes pegs, nobody bothers to run the dishwasher while, last

month, Clegg had no idea Lady Thatcher was coming to visit until it happened. That was a nasty surprise for

him, encountering Margaret as he came out of the bathroom in only his briefs. With increasing levels of stress

and insomnia all round, they really can’t go on like this. It’s threatening to undermine the political impetus of the

events next door where, observers claim, George Osborne had moved to forcibly evict his roommate Vince

Cable (left). The latter was then seen to remain outside number eleven for several hours, standing beside the

road while shouting and swearing at the closed door, until finally the police were called. 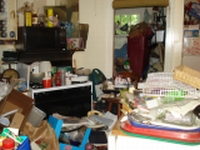 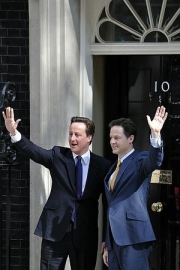 10 Downing Street immediately after the cleaner's week off.
1