Gascoigne's autobiography, 'My Story'. This drop off in interest means Gazza can no

longer afford to pay the food bills of his former flatmate and much-loved travel bitch.

from the north-east of England. "The doc sez it's good fer me son's 'elf, bein' doon fra

nineteen stone to fourteen, but ah dunno. 'E's just a slip of a lad now, one harsh winter

could kill 'im off. Jimmy's famous 'cos of 'is size, but the bellies keep droppin' off 'im nowadays. Soon youse

Back in the glory days, Gazza was a regular fixture in the England football team and Jimmy had all expenses picked up by his football star friend. He travelled the world, drinking at least fifteen pints a day and bellowing his catchphrase to anyone within earshot; "I'm Jimmy Five Bellies. The hard man. The minder. The big drinker, every day and night."
In return for getting thousands of pints of free lager, Jimmy found himself the butt of Gazza's hilarious pranks. These included Gascoigne running him over with a car, firing airgun pellets into his arse, and waking him up by throwing a feral cat on his face. The pair were the scourge of hotel staff from Bangkok to Bangalore, with Gascoigne once programming a thousand-pound robot to go to Jimmy's room and repeat the phrase "make a cup of tea, fat man" until Five Bellies went mental and smashed it with a breeze block. But Gardner himself is no innocent, Jimmy is responsible for Gazza's ban from London's exclusive West Lodge Park hotel by swimming naked in the duck pond, a sight which led to impromptu vomiting from several guests and left one child with emotional scars.
1999 was the turning point for their relationship, that year when a pissed-out-of-his-mind Five Bellies threatened some lairy teenagers with an air pistol. Standing by his friend as always, Gazza arranged for Chris Evans to testify as a character witness in court. Jimmy got six months.
Upon his release acquaintances began to notice a change in Gardner. Five Bellies cut down on the drink (he is now teetotal), paid more attention to his son, and was less willing to countenance Gazza's trademark practical jokes, such as that time he filled a pie with human excrement and made Jimmy eat it.

what we shouldn't forget is that, for a long while, Gazza underwrote Jimmy's daily consumption of

many other pies, none of which contained faeces. Now Gazza no longer makes much money

there's a lot of belt-tightening going on amongst his family and friends. Paul's trying to get into

punditry, but none of the TV channels want some twat in false breasts disrupting the commentary

box. Word is he'll end up managing Kettering Town of the Conference North, which means the

days of Five Bellies getting food in return for letting Paul set his nose alight are long gone. For a

man whose public persona is based solely on his weight that's got to be bad news."

Indeed, following the failure of the pair's most recent television project, an appearance on the Strictly Ice Dancing Christmas Special scuppered when Gascoigne tried to lift Jimmy off the rink and did his back in, Five Bellies has been forced to return to his old job as a motor mechanic. HDUK caught up with Gardner in the repair shop where he works, greeted by a man covered in engine oil who was overweight, but not impressively so.
"Me and Gazza should never have pretended to be Torvill and Dean. I might have lost a couple of bellies, but you can't twirl me around your head. I'm still too fucking fat for that." Nodded Five Bellies, seriously. "I reckon that's it for me in showbiz. Me dad says I should change me name to Three Bellies, but it hasn't got the same ring to it, and what if I lose another belly? No, me moment in the sun is over. It's back to the simple life for me."
At which point Gazza appeared from behind a Fiat Uno, threw a spanner at Jimmy's head, then ran away laughing.
Terry Christian Joins Jim Bob Carter's Travelling Circus

To the Cotswolds, where former Word presenter and professional Manc, Terry 'Lapsed' Christian, is reportedly holed

up after walking out on his responsibilities to begin a new life working a carnival, run by the former frontman of popular

that's Terry's life partner, is absolutely devastated. I suppose this is partly my fault, I'd get pissed off when Tel played

his Gay Dad and Arctic Monkeys records at top volume, but I never imagined it would lead to this. At first we thought

he must have been kidnapped and dismembered by some obsessive stalker, but no one's that interested in Terry. It

was Russell who made the connection between the travelling circus and Terry's lifelong love of trapeze artistes. That

and the note he left which said, "I can't take it any more, I'm running away to join the circus. Hugs, Terry."
Although most people outside Manchester believe Christian to have struggled for gainful employment since The Word ended in 1995, he's actually been overdoing it, presenting a local radio show and ITV's late-night 'Turn On Terry', enjoying a stint as compere at the Move Music Festival, enduring a literary agent's demands for his non-fiction burblings, making appearances as regional TV villain Ross Peabrain in 'Cutting It' and, famously, ending up kicked off reality show 'The Farm' for "being a wanker". With all this on his plate, no wonder Terry started to feel the pressure.
Back in the field which hosts 'Jim Bob's Super Circusworld' all manner of colourful rides and unique attractions are
available to the discerning circus lover. We spoke to indie entrepreneur Jim Bob Carter (real name: Jim Morrison), to
find out the truth about Christian's new way of life.
"We have many thrilling entertainments for the enjoyment of the whole family! Roll up, roll up!" Jim Bob told us,
clad in an outfit which made him look a bit like a showjumper but with a bigger hat. "Along with minor celebrities we've
got bearded showgirls, fat acrobats, grebos, punks, and at the climax Fruitbat gets fired out of a cannon. Tomorrow
Terence Trent D'Arby will be walked on by an elephant, and we're hoping to wheel out the only living boy in new cross.
There's truly something for everyone."
When pressed on the subject of Christian's whereabouts the barker took us aside for a quiet word. "Look, don't say anything, Terry's still terrified of going anywhere near his former life. That agent used to work him like a bitch. We've covered Terry in make-up and tonight he'll be performing as Smeggo the clown. This is his first appearance, and he'd better be funny. Otherwise I'll throw Christian to the lions."
Noel Edmonds Creates 'Human Blobby'
You join us in north Devon to investigate reports that long-forgotten TV 'entertainer', Noel 'Big Beardy
Cunt' Edmonds, has spent the last few years dabbling in illicit genetic experimentation, the results of
which have sent shockwaves through the scientific community. It's said by some Noel has developed
ungodly technology in order to alter the human embryo in artificial wombs, his sole purpose - the
modification of babies so they come out pink, puffy and covered in yellow spots with a permanent
toothy grin.
Edmonds (56), was born in Essex, and from a young age was sending audition tapes to pirate radio stations operating off rafts in the North Sea. His big break came in 1970 when Noel took over Kenny Everett's Radio 2 show after Everett was sacked for being a bummer. From there television was quick to pick up on Noel's unique cuddly-arrogant persona, employing 'the beard' to present the Multicoloured Swap Shop, Telly Addicts, and, latterly, Noel's House Party. It was while brainstorming for his Saturday night show that Edmonds fantasised the 'hilarious' character of Mr Blobby, a man in a large pink suit who broke stuff and caused unwitting celebrities to say 'fuck' on prime-time TV.

We spoke to Barry Killerbee, the actor formerly employed to play Mr. Blobby, hoping he could shed light on tales

of Edmonds' 'secret serum' which turns human embryos into 'Blobby-people'.

"Wouldn't surprise me at all." Gasped Killerbee in-between chain-smoking woodbines. "It started innocently

enough, a few pranks and a number one record [the eponymous 'Mr. Blobby' from 1993]. Those were good times

for the character, but Noel started showing an unhealthy interest in me whenever I was Blobbied up, rubbing

himself against my enormous prosthetic posterior and inviting "his little blob" back to Edmonds Acres. I thought it

was me he fancied, but whenever I took the outfit off Noel quickly lost interest. The final straw was when I turned

up for Peter Kay's 'Road to Amarillo' video. Noel knew I'd fallen on hard times and he sidled up afterwards to ask if

I wanted to work as his manservant, but only on the condition I wear the Blobby costume at all times. Even though

I need work to support my wife [ex-Tellytubby and cripple Britt Muff], I wasn't going to agree to that. In the end I

suppose he had to create some 'little blobs' of his own. Maybe Noel's still suffering guilt from all those people he killed, that might be what's tipped him over the edge."
Indeed, the exact number of deaths for which Noel Edmonds is personally responsible remains unknown, although two have been confirmed by police. A nine year old with special needs was killed in a helicopter crash sponsored by Edmonds 'Airborne Trust' while Michael Lush was broken like a fleshy cream-cracker while rehearsing a bungee jump without adequate supervision for Noel's 'Whirly Wheel'. Lush came unstuck by using the wrong kind of rope and misjudging his drop and perhaps these tragic events prey on the mind of a man who is currently president of the British Horse Society (along with Pete Doherty), and recently named himself 'Deputy Lieutenant of Devon'.
We spoke to some ruddy-faced West Country types about this remorse theory but they were having none of it.
"He couldn't care less about other people, bigheaded bugger. Always pushing in the queue at the pasty
superstore shouting 'Do you know who I am?'" Asserted Denny Cripplecock, a farmer's hand who lives in the
shadow of Edmonds' Crewkerne mansion. "Ever since they shut down his Blobby theme parks we've watched
men in white coats going in and out of Edmonds Acres at all hours. Someone said they even saw him up on the
roof in a thunderstorm trying to harness the lightning. We're going to get a group from the village to go up there
with flaming torches and pitchforks if he doesn't stop. What Edmonds is doing goes against nature. I don't want
my kids in the same school as a load of overgrown lab specimens with big googly eyes who smash up the
classrooms. It ain't right."
Later, in the dead of night Home Defence decided to get a closer look, creeping onto Edmonds' property and
finding a spooky annexe where we peered through the window to be confronted by a horrific sight. Inside were a
veritable army of genetically altered giants, half-human and half-wrong, all tended by teams of lab workers. These
'human blobbies' were in different stages of growth, from tiny pink globules inside test tubes to overweight eight-foot humanoids strapped to gurneys where they writhed like distressed sheep. But it wasn't the sight that disturbed us so much as the noise, a cacophony of depths and pitches yet every voice the same, a thousand cries over and over:
"Blobby! Blobby! Blobby! Blobby! Blobby! Blobby!..."
Home Defence UK
A Symptom of a Greater Malaise
CELEBRITY
SCUTTLEBUTT
ALL CELEBRITY:

Five Bellies: "Just a slip of a thing now." 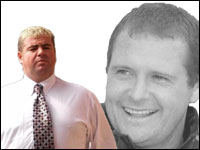 Edmonds: "An unknown number of deaths."

Christian: "Lifelong love of the trapeze."
A "normal" family after Edmonds' genetic engineering.