Hello and welcome to my Westminster diary. Constituents and tenants on my estate often ask why a

person of independent income and obvious breeding becomes an MP. The answer is obvious; to protect

you from yourselves. If you’re not working hard on my estate and reading this during brief breaks you must

be unemployed. If you’re reading this in the evening then you’ve only just drawn your curtains to the outside world. Either way, why are you reading

this? Don’t you have a low paid job, work program appointment or workfare to attend? The poor people of England are what’s wrong with our broken

economy. You and the foreigners, the mentally ill, the sick, fat people and criminals. That’s why we’re in this mess. Notice that I refrained from

adding the not-so-poor (those with only a couple of million in the old offshore account) or the elderly. Some of those buggers actually voted for me.

At one of our recent “when we’re in charge in 2015” cabinet meetings, Big Dave asked me, as spokesman for social injustice, what we should do

about all the bloody poor. My first response was that they bring it on themselves. The skivers; they’re what’s wrong with Broken Britain, them and

those bloody foreigners in Brussels. The elderly we can take everything off in 2016 when we’re back in office (without that bloody interfering Clegg

and his cronies) but the unemployed poor, they’re the real problem.

You might think working plebes are the plucky ones, because they have jobs. They may earn too little to live on, but at least these plebes are doing the right thing. They go to work, thereby contributing to society, even if they do show moral decrepitude by claiming benefits to make up their meagre wages. These are the ones who want to get on; they support the hard work done by British enterprise (who are, sadly, too badly affected by the economic downturn to pay them more than

national minimum wage). The Conservatives intend to change all that once we’re out of Europe. Then we’ll make it impossible for the

plebes to leave a job or claim benefits. When we return the country to the halcyon feudal past where it belongs, people will work purely

for the pleasure of having a job. No one will be impertinent enough to actually ask his or her betters for money.

In truth, I blame it all on competition from bloody European peasants or the slanty-eyed lot abroad. I know we’re in

a global race, but keeping our benefits on a par with their peasant wages is not the way forward. We need to keep

the plebes firmly in their place. At the top come the working plebes, then the pretending to be looking for work

plebes, then the pretending to be too ill to work plebes, swiftly followed by promiscuous teenage-single-mother-
housing-estate-plebes who breed more plebes. Did you know there are lifelong spongers who haven’t had a job in their family tree since 1742?
Why should we pay for these people, just so they can continue to freeload?
You, yes you! The benefit cheat! We have you in our shotgun sights! It doesn’t matter if you once had a career, paid taxes for thirty years, have been made redundant, fallen ill, or never claimed unemployment benefit in your life. You are part of the general malaise. You are scroungers and everyone hates you. You, the poor, are

worthless tykes and deserve the beautiful British peoples’ contempt for failing to get off your backsides. There’s no excuse for turning down

one of our plentiful minimum wage part-time jobs, building your career in care work or a call centre.

Now, many of you might be thinking that being an MP is an easy life, but only we in the right-thinking party are capable of mending Broken

Britain. Once we’ve ditched the liberal lot and fiddled the boundary rules, we can return Great Britain to her feudal majesty. Throw out the

bloody foreigners, cancel our EU subscription and ditch their preposterous employment laws. In order to do this, we need to give hard-working

MPs a 50% pay rise to cover lost expenses entitlement and top up the income in their family’s offshore trust fund. This much is obvious.
Some of you shirkers might say that a pay rise seems unfair in these times of austerity, but remember: We are working for YOU, not
ourselves.
So, I hear you cry, what will the Conservatives do when we take full control?
Only hard work for little or no reward can bring us back from the brink of collapse. The surest way to save the economy is to take all the
money out of Britain, keeping it safe in offshore accounts. As a nation, we can no longer afford to be supportive of every Tom, Dick or Harry
who thinks he’s entitled to something for nothing. When we win the next election, as undoubtedly we will, the Conservatives shall bring in
sweeping changes to put Great Britain back on track, as follows:
1. Justice
Grayling’s experience dealing with the criminal classes and Welfare to Work has come up trumps here. In order to get the best value for
taxpayers, we will close every existing prison and introduce one, vast Titan complex in Newcastle. Scroungers claiming housing benefit in the South will be moved up

North. Workfare will begin in earnest, with a scheme to build a large wall across the Home Counties sometime around 2016. This will

create much needed non-jobs in the North East, make the employment figures look good, resolve some of the pressing housing

We intend to privatise the police, with entry requirements for senior jobs opened to allow senior army types, right-thinking businessmen,

ex-MP’s and their friends to pursue pointless careers in a sector they know nothing about, much as we have with crime commissioners.
The probation service will be out-sourced to Capita, following their great success tracking illegal immigrants, thereby saving everyone money and injecting much-needed cash into private enterprise, for them to store in tax havens abroad.
2. Health Care
In order to establish a level playing field for private investment, we will extend charitable status to private for-profit companies so that they pay no tax. It is inherently unfair the NHS has charitable status while frittering away this nation’s wealth. We will introduce a new tax on crutches, white sticks and medicine, as some freeloaders think they’re entitled to such benefits just by being ill. Access to healthcare will only be available for those prudent enough to save up before getting cancer. We will also extend the Liverpool Pathway to Accident and Emergency wards, guaranteeing the release of much-needed private beds.
3. Immigration
We intend to continue with incentives for Eastern European plumbers to relocate to Britain (with the exception of anyone from
Bulgaria, Albania or Romania), thereby keeping the wage expenditure to a minimum. We will extend the contract with Capita,
expanding their remit to include writing letters to immigrants, rather than just sending a text asking if they wouldn’t mind leaving
at some time in the future “if you’re not too busy and can see your way clear, in your own time, to turn up at a court
appearance (or local travel terminal)”.
4. Tax
Following the success of our tax reduction scheme for millionaires and other better people, we will abolish tax for all earnings above the new 1,000,000 pound, high-rate threshold. To make this fair policy for all, we will also abolish benefits to anyone earning less than 60,000 pounds. We will introduce a window tax for properties valued under the highest threshold, and a tax on clocks for anyone earning less than the lowest. Council tax will be abolished and a new ‘Fresh Air Tax’ introduced. Charitable status will be extended to banks, as well as any senior bank official or employer, responsible for the safe-keeping of our nation’s economy in their offshore accounts.

As stated, we will give ex-Metropolitan Police Commissioners and ACPO members the opportunity to tender for contracts and make

up the law as they go along, without the need for costly democratic process. We intend to alter the law of succession, allowing

Prince William to become ‘The Defender of all Faiths’ including Muslim, Anglican, Plymouth Brethren and Satanists, with Prince

Harry taking on the role of Pope. We will extend the Queen’s power to veto anything that might impact upon her estate income, and

expand the right of Prince Charles to question any architecture he deems unsightly. But if anyone in line for the Throne chooses a

civil arrangement between members of the same sex, we reserve the right to undertake a prompt U-turn, no matter how good they

look in Kate’s frock.
Finally, we intend to abolish the judiciary and replace them with elected Magistrates who have experience of land-owning and public schools. We
will appoint a new ‘Media Czar’ to oversee press regulation (although James Murdoch has yet to accept our provisional offer at this time).
If we change our minds about any of these manifesto proposals, we reserve the right to undertake a ‘reverse ferret’ at any point before our
inevitable triumph at the next election. Our many successes so far, including the Economy, Education, and the Health Service, speak for
themselves. This is just the beginning of a long hard road to recovery. An MP’s lot is not an easy one. We often have to make tough decisions
that many rational individuals might think unfair. Yet this isn’t our fault. It’s the socialists who have brought Britain to her knees.
Vote Conservative and remember: We work for you, not ourselves. 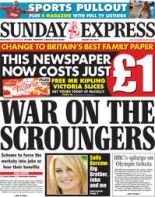