WESTMINSTER DIARY
with Quentin Workshy-Fopp
Home Defence UK
A Symptom of a Greater Malaise
ALL CELEBRITY:

Ok, so we took a thrashing in Eastliegh. I wouldn’t have gone for Maria. I tried telling Big Dave, but he was having none of it. You know how he gets

when his way is questioned; head all purple and angry looking. I tried to point out the folly of putting up a ‘catch all’ Tory candidate, but he and

George were sure she’d poach the UKIP vote. Instead she toasted our Tory one. If only he had listened to me or the Von Trapps, we could have

avoided all that unpleasantness in Hampshire. And yet, it wasn’t all bad. We did learn a valuable political lesson.

The good people of Hamble don’t like foreigners. Benny Hill built a career taking the piss out of women and the Japanese, so the writing was on the

wall. We just didn’t dare repeat it. Now the cat is out of the proverbial bag, and it's open season on anyone with slanty little eyes, a dusky

complexion, of foreign descent, pushy about their children’s education, or all four. But enough about Maria; it’s time we moved on. To be fair,

Farrage got a healthier share of the vote than us. He found the pulse of the good people of Hampshire, born and bred; strong in the arm and thick in

the head. That was something we failed to achieve, even with all of Ashcroft’s bloody surveys. Now we must move on and learn from our mistakes.
That’s why, for the Conservative election manifesto, Dave will be pulling off the gloves. No more Mr Nice Guy, not when it comes to all the bloody foreigners queuing up to take advantage of our generous welfare state. At last we’ve got Labour by the balls. Their pathetic 14% of the vote in Eastliegh was the result of them putting up a

comedian, a lesson for us all here at Tory HQ. We will make sure that, come election time, comedians are off the

Tory selection menu. This means no opportunity for Liam Fox, however hard he plays the immigration card. Even

Jez Hunt is on a queer patch (unless he stops pissing about with his ‘undercover boss’ planned NHS fiasco). And

Theresa had better sort out her allegiances by then, or she can join bloody UKIP too.

The harsher our policies on immigration, the more likely Labour will oppose them. They have no choice. When it

comes to being the nasty party they cannot outdo we Tories, and anything less will be deemed a failure. It’s a

win-win situation for us. We’ve long known that, when it comes to blaming hordes of Bulgarian pickpockets or

Romanian tinkers for this country’s ills, the public will back us to the hilt. It’s the obvious choice for our election

platform.  The ‘strivers versus skivers’ mantra was only the start. We intend to go further than UKIP. We don’t just

hate anyone from Europe - we hate everyone. And we intend to make it as difficult as possible for anyone

pretending to be indigenous to claim welfare.
Indeed, from now on, benefits will only be paid if you can prove you’re English. No more pissing about with the minimum wage or working part-time pretending you can earn a living. If you’re not English it’s time you sheeld out to live here, and while this may impact adversely on the native-born Scotch or Welshmen, I think I speak for all in our party when I say we couldn’t give a stuff. They never vote for us anyway.
Although some of you may think we have stolen these new immigration policies from UKIP, let me assure you. We’ve actually stolen
most of them from the German National Socialist Party manifesto circa 1936.
So here are our five key post-Eastleigh by-election, 2015 election, election pledges:
1. Unless you can prove your English heritage to at least six generations, we reserve the right to throw you out of the country and
confiscate your goods and property. ID cards will be introduced to prove pureness of bloodline. Any remaining foreigns shall be
forced to wear a high-viz waistcoat with the words ‘workfare’ in bright yellow letters, clearly visible at all times.
2. If you’re unable to prove a history of full-time work (of at least twenty consecutive years) or have attended a mosque, are Welsh, Irish
or Scottish or any other funny religion, you will be returned to your country of origin. This includes Devon, Cornwall and the Isle of Wight.

3. If you come here on holiday and fall ill, you will be sent home, forcibly, on crutches if necessary,

by the good people of Serco or G4S, and left to your own pisspoor health service. Any foreign

national, including Europeans, will be required to return to their native land for the duration of their illness and / or treatment before

a return to our sovereign soil. They will then be required to attend an Atos fitness test so they can prove future contributions to the

4. There will be no housing, work, welfare, or disability benefits available to anyone deemed foreign; their dependents or hangers-on.

lads!). The fact that you came here as benefit tourists to have your bouncing Brit chav baby, doesn’t mean were going to pay for the

thing to live its life of riley here, or back in Poland, Albania, Bulgaria, the Irish Republic and so on.

5. We shall introduce a new ‘complexion colour chart’ aimed at weeding out anyone who doesn’t fit the Anglo-Saxon profile, has an

odd moustache, man-skirt or turban. That’s unless you’re entitled to Saudi diplomatic immunity or own several houses in London.
We realise the definition of what constitutes ‘Englishness’ may cause some confusion, and it’s just possible a
few innocent white scroungers will be caught up in this new immigration purge. That’s why we’re using the
groundswell of national outrage at the bloody foreigners taking our jobs, women and taxes. It’s a neat
smokescreen while we finish our reforms and get started on the undeserving poor. As I've said, this is a win-win
situation for us. Now it’s up to Big Dave to push it onto the public, under the guise of doing what’s right for Britain.
Our heartfelt thanks to Farrage and his UKIP raving loony party. We would never have been able to implement this
without them.
Oh, and as for my original question, regarding the difference between a TINO (the Tory-In-Name-Only Mad Maria)
and a Kipper (UKIP Farrage-clone)?
Answer: Nothing. Neither of them seriously thought their policies on immigration would fly.
Oh ye of little faith. 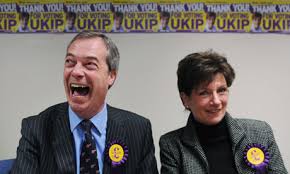 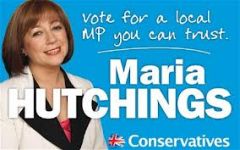 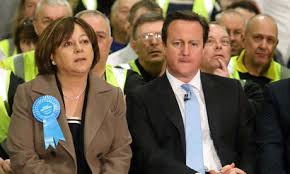 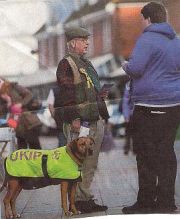 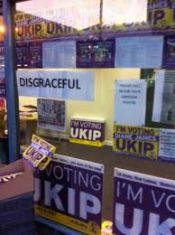 What’s the Difference Between a TINO and a Kipper?
March 2013
1