NEWS ROUND UP
with Mark Piggott and Al Likilla
Home Defence UK
A Symptom of a Greater Malaise
Hague Scotches “Bald”
Rumours
13/09/10
ALL NEWS ROUND UPS:

Foreign secretary William Hague has denied rumours that he is

The rumours circulated after photographs emerged of Hague

wearing a baseball cap at the weekend. Further unsubstantiated

rumours claimed that Hague had adopted a Bobby Charlton-style “comb-over” in order to hide his real hairstyle.

“His whole appearance is a sham,” said one unnamed source, speaking from the safety of

cyberspace. “I’ve heard from me mate, right, whose brother-in-law works in this barber shop in

Whitehall, right, that he buys brushes, combs and hair gel, but then he throws them in the bin when

he gets home. It’s all just a front. In a way it’s tragic, he’s never had the bottle to reveal the bald

“Ayup,” said Hague when the rumours were put to him, “what’s tha’ on about wi’ tha’ prattle? Shut thi’

cake’ole or I’ll shut it for tha’, wazzock Now whose round is it? Mine’s a pint o’ Landlords.” 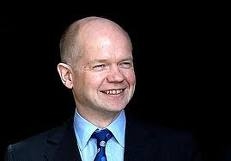 New ‘Gitcasting’ Phenomenon
Sweeps Urban Britain
16/09/10
By day James Federator is a successful Project Manager, well-respected
in the aeronautics industry with a wife and kids waiting for him in the London
satellite town of Basildon. But get this middle-aged man on a bus or
commuter train and his personality changes, Mr. Federator suddenly
becoming the scourge of fellow travellers everywhere.
“I’ve got some pretty serious technology here.” James told Home Defence, pointing to his iTransmit phone conferencing and high-decibel music transmission device. “One of these babies will set you back a couple of grand, but the cost is worth it to channel my favourite music publicly, at a level that drowns out talking on phones or dance music blaring out on the top deck. With this palmpad I can instantly access all the long-players in my collection, from Mike Oldfield’s ‘Tubular Bells’ to ‘Graceland’ by Paul Simon, then broadcast the songs at a level enabling my whole carriage to enjoy them. Nothing livens up a train journey more than Kate Bush, and if anyone asks me to turn it down I just pretend I can’t hear them because the music’s too loud.”
Indeed ‘Gitcasting’, or the tendency of rich, white males in the 40 – 65 age bracket to blare out the hit records of thirty-five years ago in a communal space, has become the big UK trend of 2010. The fad is seen by cultural commentators as both a continuation of the ‘boombox’ phenomenon of the 1980s, and an attempt, by those who earn six figure sums annually, to translate their

domination of society as a whole into additional audio influence. This manifests itself with men

choices, including Pink Floyd’s ‘The Wall’ and classic editions of ‘Now That’s What I Call Music…’.

“’Gitcasting’ is an unusual social trend, since it’s both celebratory and hostile at the same time.”

they’re also on the way to breakfast meetings in expensive suits. In order to
override schoolchildren who might sit together giggling to the more modern sounds of Lady Gaga or
N-Dubz, the ageing Git-caster fires up his expensive musical device and overrides their puny sound systems
with ‘The Best of Jean Michel Jarre’ or ‘Tales From Topographic Oceans’.”
Gippy continues: “I predict a day will come when we won’t be able to hear public transport announcements at
all, or indeed ourselves think. That said, I can’t see the government empowering transport officials to take
action anytime soon. These middle-aged gits with their outdated record collections and weekend homes in
the country are the exact same people who voted for the ConLibs in the first place.” 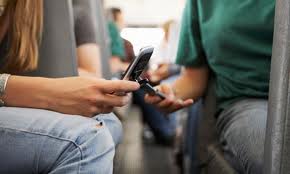 Hawking “A Twat” Says God
07/09/10
God has hit back at Stephen Hawking, calling the paraplegic
scientist “a twat” after Hawking claimed God had nothing to do
with the creation of the universe.
“Hawking? He must have that voicebox right up his arse. What
does that tosser know about creation anyhow? If it wasn’t for me
he’d still be an amoeba,” snarled God from his smart beach house in the Caribbean.
“Listen – that Hawking can say all he wants, but he wasn’t there and I was. And I’ll tell you this for nowt: I knew Hawking when he was just a spotty undergrad at Oxbridge and he was a twat then and still is,” said God.
“Anyway, must dash, I’m playing tennis with Richard Dawkins.”

David Cameron: “Britain Must
Accept That It Totally Sucks”
17/09/10
The unemployment hub of Carlisle in the North of England, where today Prime
Minister David Cameron made the most pessimistic speech of his Premiership so
far. Before a group of jobless LibCon supporters gathered for his personal
appearance at an abandoned building site, ‘Diddy’ Dave’s message was clear.
“The UK must realise its estimation of itself has been too high for far too long.” He said. “When it comes down to it, we’re actually a bit rubbish.”
As murmurs of unease passed through a crowd consisting of working class Conservatives and inveterate England supporters who had travelled specially, Cameron went on.

“Under the last government we used to think we were oh so great, yes indeed. With our ambition and surplus cash and jobs. And yes; I was as guilty as anyone.”
“I thought we would always exist in a boom.” The Prime Minister reflected. “A time of plenty, with room for all those little luxuries we took for granted. Like regular foreign holidays, second cars and ‘the environment’. But now it’s time for me to alter my worldview and own up - I was wrong about our nation being any good whatsoever.”
“I mean, have you seen the kind of cinema we produce? That’s precisely why I abolished the UK Film Council. And what about the Klaxons’ new album? It’s really poor. Really poor. Every sign points to us not being in any kind of, what I believe our disgraced footballers would call form.”

Cameron’s speech is seen as part of a wider remit from the government, aimed at rewiring

Britons’ thinking so as not to expect much, either from their elected politicians, or the future as

a whole. What with the economic crisis, increasing home repossessions, and the irresistable

rise of Poundland, the British people are being encouraged to downgrade their expectations.

But this hasn’t gone down well with everyone, including some from Cameron’s own party. As

“Where does this guy get off, telling us most other countries are better than England, and

those that aren’t will be soon?” Mr. Batsqueak fumed. “The substance of his message seems

long gone.
“Cameron says we no longer lead the world in any area of note and that both wars were a really long time ago so we should stop ‘banging on’ about them. I’m shocked and appalled. If the Great British public lose that inflated sense of self-importance they’ve nurtured for generations, what on earth do we have left to live for?”
But the PM was unrepentant, telling the crowd: “Even our political system is shot! Look at the state of this coalition. I don’t really have a mandate, yet I’m in charge. What’s that all about?”
“The LibDems want electoral reform but, let’s face it, that’s not going to do me much good. In fact, I’ve told Cleggy it’s a no-goer. Not until I’ve sorted out the bigger problems within this insignificant country. Like the constant bitching.”
“Although I can almost understand that,” Mr. Cameron concluded. “Because let’s face it, we totally bite the big one.” 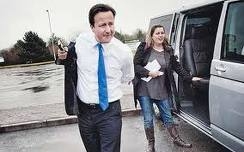 Police Officers “Face 2,000
Complaints”
18/09/10
The police force came under renewed pressure today when it was revealed
that three officers had each been the subject of over 2,000 complaints in the
last year. The officers, all based at Bow Street, London, were claimed to have:
A spokesman for the Met defended the men’s actions, saying:

“Look, they’re just a bunch of guys, y’know? Like, chill out dude. Anyway, they’re undercover, so they can do pretty much as they wish with total impunity.”
* Follow the three cops in a new reality series, “Bad Superintendent,” tonight on ITV1 at 9pm (in The Bill’s old slot). 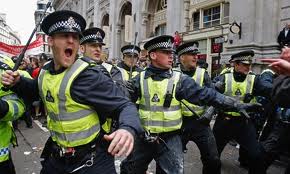