To Rio de Janiero, South America, where today attempts by FIFA’s president, incorrigible feminist Sepp Blatter, to set up a

superplex of retail outlets, restaurants, merchandise stalls, kangaroo courts and a media centre was overrun by thousands of

Brazilian protestors, arriving from outside to occupy the synthetic encampment in what Sepp has asked police to investigate

as “an act of terrorism”.
“We are here to show Herr Blatter he cannot simply invade any country he chooses, take our tax money, bring in his own laws and strut
about all summer like some kind of Octogenarian peacock.” Tarmac layer Taco Dibbits (left) cried out to applause and cheering as HDUK
watched demonstrators set fire to billboards bearing the tournament logo - a weirdly-shaped hand holding a green ball. “The people of this
country have had enough. There is no health care, our transport system barely runs, the standard of literacy at my son’s school is
atrocious, and the government is throwing billions at Sepp to host some football. No more! We demand bread and medicine, not
international sporting circuses.”

sugary beverages, as supplied by the official tournament sponsors, down the drain.

By the time order was restored, this unrest had spread to other areas, and the civil uprising was threatening to bring

down the government. In order to quell the outraged masses, Brazilian President Dilma Rousseff (left, with Blatter) gave

several ringleaders seats on her government’s executive branch. Once installed, their first action was to remove Brazil

from its role as hosts of the 2016 Olympics along with next year’s world cup. Fifa’s new

interim president, ex-Aston Villa defender Paul McGrath (right), has now selected
Birmingham and Sheffield as last minute stand-ins instead. These cities will now put on the greatest event in all world footy, which is a
result for us as its being done on the cheap.
Meanwhile, reports Blatter suffered a fatal injury during the Sao Paulo unrest appear wide of the mark, although the authorities have
confirmed that one over-eager activist intervened to march the sporting despot into Fifa’s own ‘interrogation chamber’ as the branded
village burned around them. Blatter was then sodomised with a bayonet but has subsequently been admitted to a South American
emergency ward where he is said to be “stable, but not doing too well”.
NEWS ROUND UP
with Al Likilla
Home Defence UK
A Symptom of a Greater Malaise
Nigeria Denies National Space Programme "Set Up to Scam Martians”
11/08/13
ALL NEWS ROUND UPS:

To Abuja, the capital of Nigeria, where today a fractious press conference finds the director general of the leading

space programme on the African continent, his excellency Seidu O. Mohammed, forced to deny allegations that

motives in spending millions to send a Nigerian astronaut into space within five years.

“I’ve heard rumours from those affiliated with our partners in this brilliant programme,” His excellency intoned. “They say our motivation goes beyond improving satellite communications, fighting militants in the north, or understanding weather patterns in greater detail, as I have specified previously.”

Mr Mohammed went on: “In the United Kingdom they claim our National Space Research and Development Agency is in league with organised

scam artists, and we are only heading into orbit because life forms up there have not yet heard of our famous ‘419’ code. Such beings would be

responsive to the idea of inheriting money via the will of a recently dead member of our royal family, unlike the clued-up humans of planet

“Well, I wish to defend our honourable space cadets against this terrible slur on Nigeria’s good name.” He propounded. “There is absolutely

no chance our Martian friends will be advised that a ‘long-lost investment’ has now accrued to many times its value, and all they have to do

to recoup these limitless riches is call a number and follow some simple instructions. In addition, no official government letters to this effect

have been released to accompany the astronauts within their capsule, nor will they be.”

Yet Nigeria’s space programme continues to attract opprobrium, with allegations that western aid has
been diverted into rocket research, spaceman training, and authoring tales to describe Nigerian gold being hidden in other parts
of the solar system by feckless aliens, many millennia ago.
In fact, much of the seriously religious country is proud of its pioneering attempts to send satellites into space (the first of
which “lost power and disappeared in 2003”), along with their forthcoming initiatives to build a rocket launcher, establish a moon

base by 2030 and uncover “intelligent, but, crucially, not too intelligent” forms of life as soon as possible.

But, as President, Dr Goodluck Jonathan (right) told an undercover reporter wearing a hidden wire during the

official inauguration: “This programme is good for our self-image, reputation, and, if we can find a naive race out

there, the economy too. I’m not saying aliens will automatically believe a human they’ve never met has left a

fortune to them, money which is held in a bank account that, unfortunately, can be accessed by no one else.

Or that, to release said fortune, our nation simply needs a small amount of funds, wired immediately, I’m

definitely not saying that. But you never know. E.T. thought the earth people were lovely and would help space

visitors and look where that got him. If the extra-terrestrials we find are anything like E.T., the sky’s the limit." 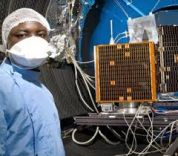 Busy Teachers to Have Brooms Inserted
into Arses
26/08/13
To the thriving academies and value-for-money free schools in operation across England, where
today staff busily prepare for a return to work, following their final six-week summer holiday ever.
But on arrival in the classroom, teachers everywhere have been shocked to discover yet another
expectation placed on them by the Department of Education. This responsibility comes in addition to their mooted increase in hours, reduced vacation days, and the implementation of sweeping but barely comprehensible changes to the curriculum, alterations that appear to change completely, week on week.

“As if all these additional drains on our time and energy weren’t enough.” A year eight teacher who wished to remain anonymous told local TV in

Droitwich. “This week Mickey Gove tells us of this latest “opportunity” for saving money and improving facilities in term time. Apparently it involves each of

us sticking a broom up our arse, then ‘multi-tasking’ by sweeping the floor.”

“And the government’s take on it, when all this unprecedentedly painful legislation comes in, is that we’ll just have to ‘shut up and like it’.”

passages. The NUT has promised to harness this backlash, with strikes and protests planned for some unspecified time in the long-term future.

Meanwhile, as an immediate fix, they’ve now asked members to press the government for free lubricant so that education professionals can “slip it in

more easily”.
But Michael Gove’s office remains unmoved, with spokesman Zebedee Shortfall explaining the background to this controversial move on the BBC’s Daily Politics.
“Studies show thatm in 80% of English classrooms during lesson time, there’s an increase in dust bunnies, chocolate wrappers
and dust. This latter substance is subsequently turned to dirt by the hot, cascading tears of a betrayed generation.” Shortfall told
an attentive Jo Coburn. “In light of this, the DfE hopes that, during assemblies and downtime, male and female teachers alike will
grab the wooden end of a cleaning implement like I have here.” He lifted a broom up for the cameras. “Insert it into their
bottom and move about, thereby keeping the immediate surroundings spick and span while doing their bit for the environment.”
“Honestly, I’m surprised so many of them have got upset by what’s actually a very straight-forward request.” Shortfall opined.
“It’s not like teachers aren’t used to this sort of thing. Ever since the coalition came to power they’ve been metaphorically raped
with a broom handle.”

Winter Fuel Allowance Update: Blood Circulation to
be ‘Means Tested’
23/08/13
The office of every major energy firm in the UK, where, this week, the companies have been charged with implementing the
latest salvo in a war against much-hated ‘healthy and wealthy’ retirees. Indeed, many immoral pensioners have been flagrantly
accepting winter fuel allowances from the government for years, whether they are on the breadline or not. In some cases
these ageing exploiters don’t even feel the cold that badly, the bastards.
“First off, we’ve started to work with the banks to get private information about savings.” Scottish Power spokesman Nufun Hardkiss told our reporter when asked how

this ‘means testing’ would work. “Then we go round the houses of the elderly during winter to find out how cold their hands get.”

He continues: “Our qualified experts observe rigorous medical procedures involving rubs and clutches at the digits of old folk

during a typically snowbound Glasgow January. This gives our suppliers a sense of whether the wrinkly extremities remain at a

satisfactory temperature, even with just a single bar of the fire on.”

them I say; damn right it will; tough. You don’t give short people a refund on concert tickets just because they can’t see a damn

thing. Besides, we’ve got to claw the money back somehow.”
Many have expressed discontent at the grant-prohibiting assessments which penalise relatives who are either moneyed, or possess free-flowing blood in spite of their age. However, there is one group of OAPs no one has much sympathy for, who are being specifically targeted following the recent spending review. These citizens have emigrated to hotter climes and spend their golden years in the sunshine of the Costa Del Sol, raking in monthly benefits for
heating they don’t need all the while.
In the coming months, these leathery Brits will be surprised to find Civil Servants at the doors of their luxury villas, arriving to check
levels of insulation and issue fines on the spot. Once in Spain, these inspectors’ pay, flights and accommodation will be factored in,
with opposition parties suggesting the Chancellor won’t actually make any profit after this is done. Yet, when he announced the
flagship policy earlier today, George Osborne gave such a view short shrift, saying he was confident this new approach would
save “at least a billion pounds” by 2020.