The scene was Collectormania 5, the place; Milton Keynes, the

fanboys; Steve Gibbs and his mate Phil, two stalwarts of the

scene who avoided Orcs and ex-professional footballers to take

their place in the all-male queue, ready to meet that star of TV and big screen, Joe Pantolino.
"When Joe came out he looked a bit unwell." Gibbs exclusively told Home Defence the other week. "So it wasn't a surprise when, after I'd gained his trust, Joe confided that he was 'fucked up', having flown in late the day before and then been directed to a shopping centre and several hundred enthusiastic Englishmen. That'd be too much, even for a hardened wiseguy." For a while Gibbs listened to Pantolino's complaints, nodding sympathetically, before finding his moment to push a Sopranos photo under Joe's nose for signing.
Joseph Pantolino, 53, stars in Sky TV's 'The Handler' and has a tendency to introduce himself to strangers as 'Joey Pants'. A list of Joe's best roles inevitably includes that pimp who was a bit nasty to Tom Cruise in 'Risky Business', one of the nasty guys in 'The Goonies', a nasty Italian guy in 'Baby's Day Out' and the guy who acts Jason Priestley off the screen (nastily) in 'Calendar Girl'. But it's through his role as Ralph Cifaretto in 'The Sopranos' that Joe cemented his place in the UK's hearts, portraying a made mobster who achieves sexual gratification by having a dildo shoved up his poo-shoot and who once beat his pregnant girlfriend to death outside The Bada Bing (a Sicilian gentlemen's establishment).
"Joey Pants was great." Enthused Gibbs. "We congratulated each other on having excellent taste in spectacles, then chatted about his website* and the Asian-fusion restaurant he runs like the Mafioso Gordon Ramsay. It really made up for the last convention I went to near Wembley. Back then Adam West and Mr. Miyaggi weren't even willing to be photographed, although Miyaggi did mime the 'wax on, wax off' routine to me and Phil when he saw us at the front of the queue. I think maybe he was on some kind of medication."
As polite and friendly as Pantolino remained all day, the concrete suburbia of Milton Keynes must have come as something of a culture shock to a man who once ran numbers for the mob while his stepfather served prison time for trying to hijack the Hoboken to Manhattan ferry. Gibbs agrees, saying: "Me and Phil asked Pantolino what he thought of the town. Joe looked round once before answering with, 'what can I say? It's a fucken mall.'"
*Joeypants.com

London Man Shocked At How Easily You

Can Get Hold Of Magic Mushrooms
31/05/04
To South London, and a resident of the capital known only as 'Big Alan' was this week dismayed at the increasing ubiquity of psilocybin mushrooms around the city.

"In my day, anyone who wanted a psychedelic experience had to spend all Autumn hunting through manure-strewn fields just to end up with one dirty bagful. Either that or make friends with the local dealer which was often an even worse experience. Now students just convince some hippy consultant at the bong shop they're going to use magic fungi to decorate their mantelpiece and they can get as much as they want. Where's the challenge in that?"
Indeed, many shops and market stalls are now exploiting a loophole in Home Office regulations which allows 'magical' mushrooms to be sold fresh as long as the plants are used for 'ornamental' or 'research' purposes. Many retail outlets now stock at least four types, each giving a different strength of 'trip'. And you don't even need to recite a Bill Hicks skit to get hold of them.
"What does that say about our 'fast food' culture, eh? Today it takes no skill or endeavour to get off your face. Is this progress? Frankly I'm appalled!" Huffed an exasperated Alan. "Youngsters have no idea how satisfying it was to get fucked up after putting in the hours and legwork picking your drugs. All that wandering around in the middle of nowhere, stepping in cowpats and wondering whether a farmer might shoot you at any minute. Then back home afterwards, we always felt brave and industrious while mashed off our tits. I can't believe my kids have lost that."
NewsBlast!
with Al Likilla
Home Defence UK
A Symptom of a Greater Malaise
News!
Salisbury Man & Another Bloke Meet Guy Who Played Ralph In 'The Sopranos'
24/04/04 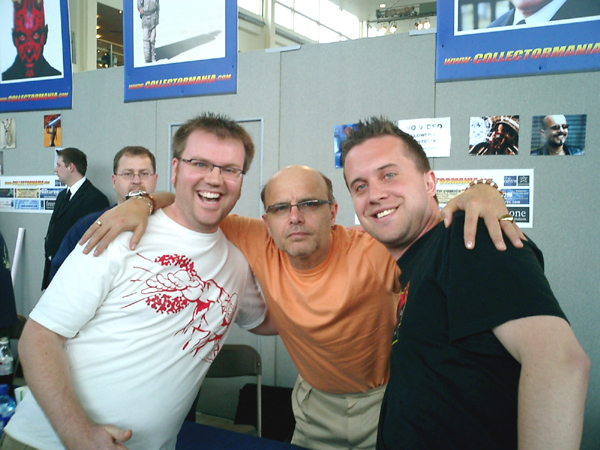 Gibbs, Pantolino & Phil: "Nice glasses!"
Blast!
Bristol Man Meets Attractive, Drunk Neighbour In The
Street
08/05/04
It was approximately 2am on a recent Saturday night when a resident of the Redlands district of Bristol, Martin Granville, met one of his neighbours for the first time (despite having lived in the same road for more than half a decade).
"Her name was Lucy, she lives two doors down." Said the wistful Granville, a single man in his late twenties who was still recalling the encounter fondly some days afterwards. "Alright, so she was a bit hammered, but Lucy seemed very nice and friendly. After shaking my hand she made me promise to invite her to future parties I might be having and asked me why I wasn't sitting indoors. Then Lucy's friend dragged her away, but not before she'd given me a kiss on the cheek. I might have to go round there and borrow a cup of sugar or something."
This meeting was observed by two other males, from their vantage point smoking with Martin on his doorstep. The pair also received handshakes from this complete stranger, but the elder of the two was quick to deflate Martin's hopes.

"Lucy got made to leave because her boyfriend was waiting up for her at home." Stated the older man. "Granville shouldn't get his hopes up. Chick like that's born with a boyfriend."
Come On You News!
Manchester United Fan Unwilling To Admit They're Now The Third Best Team In The Country
24/05/04
Like many of his fellow Manchester United supporters around the world, Haroon 'Arold' Latif lives absolutely nowhere near the city of Manchester and he's utterly unable to grasp the concept that M.U.F.C. are now officially the third best team in England, according to associates.
"When you ask Haroon if third place in the Premiership is a comedown he just says 'no, no, no, no' in that silly northern accent of his." Stated a former colleague of Latif's, Stephen Lacey. "I tried explaining that his team is never gonna compete with Abramovich's billions or Arsenal's continuing dominance, but he won't have it. Then Haroon starts going on about them 'triumphantly claiming' the F.A. Cup, as if that's an argument. Ferguson didn't even enter it a few years back because he thought the thing was such a pissant competition and now it's saved their season? If some domestic cup's such a good indicator how come Millwall came second? And I've got another two words for you Haroon: Diego Forlan."
Latif can often be found entertaining a seraglio of women in his Docklands flat as he endeavours to live the lifestyle of a professional footballer without actually being one, and was only too keen to defend the club he 'loves'.

"We'll be back. Number one again, Kleberson and Smithy the stars next season. Who needs Beckham? You'll see, top of the league."
Cheese!
Bath Schoolteacher Carves Tumescent
Phallus Out Of Cheese
28/02/04
As part of the festivities surrounding his February housewarming party Archie Sails, a
teacher of Media Studies at GCSE level, decided to sculpt a penis out of mature cheddar,
bemused guests report.
"When I got to his lovely Georgian flat I was amazed at the spread they'd laid out."
Commented one guest known only as Dave. "There was every kind of drink and snack,
specially burned 'mood' CDs and effervescent bantering from Archie's housemate. But the
real centrepiece was his 6-inch cheese-cock, that was a real conversation starter."
Intrigued, we went directly to Archie for insights into what he refers to as an 'art project'.

"Things were touch and go there for a while." Sails, 28, admitted. "I left it until an hour before the party to begin on my cheddar slab and I'd nearly finished when the bell end fell off, along with part of the shaft. Luckily I had some Primula on hand and its cheesily adhesive properties saved the day."
But not everyone is impressed by the plucky Brit's speed-sculpting.

"He was promising to do this for weeks before the party." Said Archie's flatmate who wishes to remain unidentified for fear of reprisals. "Then he actually did do it. Don't ask me why though, I've no idea." 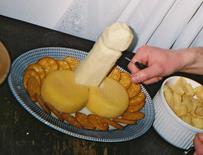 The cheese phallus in question.
ALL NEWS ROUND UPS:
1