To a small village outside Bangor in Wales, where witnesses report that a local spot welder, one Dionysus Trannyshack, has been
seen stuffing his life savings in that gap between his mattress and bed frame, an act that was immediately hailed as a ‘dynamic new

paradigm’ by economists around the country.

“With the banking sector horribly unstable and its future only guaranteed for as long as government bailouts continue, a public cash

cavalcade that could end anytime, Mr. Trannyshack shows a fresh way forward. After all, 0.5% interest is hardly worth the risk.” A

leading city consultant, who wished to remain anonymous, told HDUK. “What if we end up having to besiege Lloyds or Barclays

after another run on the banks, like we did with Northern Rock? No one wants to be banging on a glass frontage in a desperate

attempt to retrieve their money before the financial sector falls apart completely, like we’re in bloody Argentina or somewhere.”
“Put simply, Mr. Trannyshack is an outlier for what used to be a recognised safeguard among suspicious bumpkin types, and may
soon become the norm once again.” The anonymous consultant (right) went on. “Namely, the refusal of the lower classes to accept
that banks can be stable, trustworthy establishments. Instead the working man looks at the evidence, and he concludes that

pieces of furniture he sleeps on every night.”

Indeed, across the UK, British citizens have been following the lead of the Welshman, withdrawing savings

to keep the cash concealed around their homes and workplaces, or carrying it wherever they go in

knapsacks, bumbags, tiny suitcases with pull out handles that constantly trip people over and, in one notable instance, a red and white

handkerchief tied to the end of a stick.

Meanwhile, that man who started it all was gnomic in his response when HDUK tried to learn the full story, Dionysus (left) saying only:

“Ain’t none of them bankers stealing my hard-earned, no sir. I’ll take my chances with the neighbours and me own drunken son, I feel better

that way. At least people round here only steal from their own.”
NEWS ROUND UP
with Al Likilla
Home Defence UK
A Symptom of a Greater Malaise
PM To Re-establish Nation’s Moral Fibre By Making Marriage Compulsory
07/01/13
ALL NEWS ROUND UPS:

To the Camerons’ city residence in Notting Hill, where today Prime Minister ‘Diddy’ Dave took time off from

his house. This new set of policies is aimed at returning Britain to poorly imagined days of yore, back when

the PM believes everything was great.

“I freaking love being married, marriage is the tops.” Mr. Cameron intoned, backed by his fragrant wife Samantha (her equine face set in an admiring

smile), along with a number of Cameron offspring, all indulging in boisterous horseplay. “Put marriage in place, and a brilliant utopia will inevitably follow. I’ve seen that for myself, and it’s also the experience of my very rich friends.”

“Which is why I’m taking dramatic steps to ensure everyone experiences the inherent wonderfulness of matrimony.” Diddy Dave (left) went on,

his puffin-face nodding like a fat cartoon woodpecker. “Be it between a man and a lady, two girls, a couple of lovely gays, or whatever. Marriage

is the cornerstone of civilized society, and everyone needs to be a part of it. Otherwise I’ll stop their tax credits.”

different, British citizens will be lured into matrimony with a range of economic inducements, including tax breaks and money off vouchers.

Government-backed loans at 0% interest will also be available, enabling couples to go ahead with a day full of pomp and trimmings, elements

surely guaranteeing the best experience of their lives.

The wedding industry is excited by this potential business boon, and Cameron’s plan is backed by those who, like the PM, expect moral purity and ‘traditional values’ to follow the adoption of a married lifestyle framework. Yet others have accused the Prime Minister of “magical thinking”, or a pointless commitment to an increasingly irrelevant institution, one that no longer holds much of a place in our fully evolved, secular society.
Still, one couple who took early advantage of this opportunity, a Gilbert and Beryl Smirk, were successfully married last month at
enormous expense in a church near Wolverhampton. But within weeks of returning from their lavish honeymoon in California, the
Smirks (right) were telling anyone who would listen of their disappointment.

“We took our life savings and the full loan Diddy Dave offered and had a massive blowout.” Mrs. Smirk

complained to Home Defence. “But now that it’s over my sense of deflation is palpable, and my husband’s

even more depressed than he was before.”

Beryl goes on: “We were expecting some amazing, altered state of being, and that everything would immediately become better, on into our

happy ending, forever and ever. But everything’s the same as it always was, only now we’re deeper in debt. I’m still exhausted from pointless

labour every day just to make ends meet, the weather’s always dull or insane, and I can’t turn on the TV for fear of seeing reality shows about

“In fact,” Mrs. Smirk concludes. “The only real difference is that I’ve had to change my surname to reflect the fact that I’m now ‘owned’ by my

life partner. This meant going into scores of my Internet accounts, trying to remember all the passwords and filling out endless online forms.

Bloody annoying, let me tell you. I wish my head hadn’t been turned by that diamond ring now.” 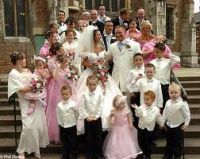 Liberal Democrats Pass Round the
Collection Plate at Cabinet Meeting
18/01/13
The Houses of Parliament, Westminster, where today the near-bankrupt Liberal Democrats were
forced into desperate measures to kick-start the party’s cash-flow and ensure their political
survival until the end of their first (and only) term as minority rulers of Britain.
“Desperate times call for desperate liberals.” Nick Clegg writes in an internal memo, circulated prior to the meeting, and which none of the attendees read in advance. “Since being in sort-of-power, we LibDems have managed to alienate every financial backer we ever had, while simultaneously seeing party membership plummet.”

The note goes on: “While these developments may prove just an unfortunate side-effect of the ‘tough decisions’ we had to take in sharing

government with our ideological opposites, all the while backing our senior partners in whatever they do, the last few months have seen the

financial concerns become more pressing. Particularly after we lost our deposits in the last six by-elections.”

“Put simply.” Clegg (left) concludes. “We need your help to stop the Liberal Democrats going completely belly up. If you can spare some

charity in these hard times, I’ll make sure it’s tax deductible. You could call it a contribution to the ‘Big Society’ if you like.”
And so, towards the end of the scheduled discussion, following talk of welfare reform and a Powerpoint presentation from Danny Alexander on the ins and outs of International Aid, a metal plate was manifested from somewhere and Nick Clegg spoke up, asking for ‘gifts from the faithful’, alms for his party, and “whatever loose change anyone has in their pockets”.
Cabinet meeting attendee and Junior Minister for Austerity, Jolyon Parsons, takes up the story.
“I was pretending to listen while playing with my smart phone when someone passed across a small metal dish with the Liberal
Democrat logo [a yellow shitbird] engraved on it.” He told the New Statesman magazine. “Apparently it was meant to be some kind
of offertory or collection plate or something, but I’m Hindu so I got confused. I thought we were meant to have a look at the bowl and
then pass it on. The thing was quite nice.”

“If I’d known the truth I wouldn’t have donated anyway, the LibDems are really annoying.” Jolyon went on. “All that ‘we don’t like’ this, and ‘we’ll

block you from doing’ that. It was more embarrassing for the Queen though, we had her sitting in as a special guest. Thankfully Her Majesty didn’t

take umbrage when the plate reached her. Lizzie just gave a pained smile, murmured something about ‘not having any cash on her’ and passed it

on to Vince Cable.”

Once the collection plate had completed a full circuit of those in attendance donations totalled £23.62 (plus a couple of stray euros). This was

subsequently confiscated by Chancellor George Osborne, on the grounds that he didn’t trust the Liberals not to spend it on some kind of

To London’s Wapping, where much of the nation’s tabloid press is based. HDUK came here to seek reaction to reports that nine out

of ten stories published in the popular press during 2012 relied for veracity on an unnamed ‘source’, one that actually existed only in the mind of that journalist whose name was on the byline.
Accompanying us was professional Red-Top analyst Gasper Blowhard (right), whose painstaking research underpinned this survey. He told us:
“Everyone knows papers like the Sun or the Mail routinely make up quotes from fictional individuals to support non-stories written to enforce an
editorial line. But now my research gives significant statistical backing to the belief that most tabloid press outputs have no basis in reality.”
As we were being rebuffed by press officers Blowhard went on: “In national terms, the ideology of these tabloids comes from a few affluent men
at the top of a handful of corporations. These CEOs aim to increase their circulation levels and website hits by pandering to existing prejudices
which can be found in the middle or working classes.”
“Unfortunately, these powerful men haven’t been close to the real world in decades, so it’s somewhat unconvincing when their ‘sources’ are quoted. An editorial line might rail against supposed preferential treatment convicted child murderers receive in prison, or talk of the endless immigrant wave flooding this country, lowering house prices like some kind of dusky subsidence.”

friends of famous people, there making statements about celebrities either putting on or losing weight. Having investigated in

depth, I can state with certainty that 60% of tabloid news is complete and utter BS, with no more grounding in the real word than

the yelled ruminations of a homeless drunk slumped at a bus stop.”

Frustrated at failing to get beyond reception in News International HQ or the Mirror Group, Home Defence was looking round,

wondering where to go next, when we were beckoned down a dark alleyway off Thomas More Square by a shadowy figure who

encouraged us to come close, before whispering the following testimony in our ear:
“You know, that mass of bilge you’re asking about can be entirely traced back to editorial desks.” The mysterious man assured us, his face
shrouded by a dark hood. “That’s where most of those amoral wankers in the newsprint business reside, happily concocting and recording their
lies. Then this spiteful nonsense is published and hacks cross their fingers, hoping the paper’s mogul owners pull their collective arses out
of the fire in the face of any legal action.”
“And if you try to look into any of these quotes.” Our enigmatic source went on. “By employing professionals to seek out the human beings
behind unattributed statements, you’ll find no point of origin for the rumours. The trail goes cold and there’s nothing to see. A ‘source’ simply
vanishes, winking out of existence, like this…”
HDUK then looked up, hoping this mysterious man would expand on his statement, but there was no one to be seen.