The city of Warsaw in Poland where Home Defence reports back on a growing international phenomenon. With unemployment in

Britain at its highest for generations, and scores applying for just a few posts in newly-opened branches of Wetherspoons and The Money Shop, recent months have seen a great migration Eastwards as groups of working class Britishers heading off to former Communist states in search of job opportunities.
“When we joined the European Union back in 2004 we could never have foreseen this.” Out-of-work tyre-fitter Lech Walesa told HDUK over a pint of Zwyiec. “Thousands of your boys have suddenly appeared over the last few months, coming here to work hard, learn the language and get their hands dirty. They hope to send a bit of money back to their families in impoverished, urban England, so they will pick litter, dig fields, work in factories, sell fruit from a bin in the street, anything to make ends meet. This can-do generation of Brit migrants really puts us native Poles to shame.”
Fears this flight may lead to a ‘brain drain’ in the United Kingdom have proved inaccurate so far, with the majority emigrants comprising the
long-term unemployed and callow youths, youngsters who see the prospect of getting a job in Britain as something akin to winning the lottery.
But concerns remain that those who leave their home for somewhere friendlier, less depressing and governed by people who don’t obviously
hate the poor, might never come back.
As Boiler Platt, a fat man from Romford who runs a corner kiosk for British emigres in Krakow selling sandwiches, ale, and imported celebrity
magazines, told HDUK: “There’s nothing like this for me back home. Here I might only earn a pittance, but at least I’m in gainful employment,
and the boost to my self-esteem has been tremendous. If this cubicle goes under, at least the benefits system over here makes sense. I just
wish there was somewhere to get a decent fish supper. There’s only so many times a man can chow down on beetroot in one day, you know
what I mean?”
Home Defence UK
A Symptom of a Greater Malaise
NEWS ROUND UP
with Al Likilla
ALL ROUND UPS:
Fluffy Yellow Duckling Appointed New Metropolitan Police Commissioner
13/09/11

New Scotland Yard, where today the Mayor of London and Home Secretary put turbulent times at the Metropolitan Police

Headquarters behind them and, after what has been described as a ‘competitive interview process’, unveiled the latest

individual to take up the post of Commissioner, an adorable baby duck nicknamed ‘Dixon’.

“He’s perfect for the role,” Theresa May told a sceptical press. “People of all cultures and walks of life love to pet, hold,

and generally interact with this little duckling. Dixon’s the only one who can bring us all together and help everyone forget
they’d quite like to kick in JD sports and steal some expensive trainers. At least for a bit.”

Following the announcement several of the failed candidates were gracious in defeat. The Acting Commissioner, Tim Godwin (left),

admitted the representative of the waterfowl community embodied everything required of a leading police officer in London, being

fresh-faced, untainted by controversy, appealing to the public, and oh, look at the little fella! Couldn’t you just squeeze and cuddle

him all day long?

Political experts suggest this move was a shrewd one on the part of Boris Johnson, a man who shares a number of attributes with

the small duck and reportedly spent time with Dixon recently when the pair discussed how to improve morale across the capital.

The duckling’s input, although incomprehensible to many of those present (Deputy Kit Malthouse, in particular, described it as: “Just a load of quacking really”) met with vigorous approval, Johnson telling journalists afterwards that the ideas of his new Commissioner were “a breath of fresh air”.
Community Leaders in those parts of the city worst hit by the recent riots have expressed cautious optimism, with
Tottenham-based Preacher Dingus Cuspidor telling Home Defence: “This one’s a lot more friendly than the last guy, that’s
for sure. The new guv'nor is a very good listener, he seems to have a more nuanced understanding of race relations than
previous Chiefs of Police, and I love the way he gets excited when I offer him a piece of bread.”
But as HDUK went to press we received confirmation the duck had been forced to step down following leaked evidence that
suggested Dixon had been accepting backhanders from the RSPB in return for privileged access to Britain’s most powerful
public figures.

Iran Sends Emergency Peacekeeping Troops to Quell British Civil Unrest
01/09/11
Tehran, the capital of the Islamic Republic of Iran, where today President Mahmoud Ahmadinejad visibly tried to suppress giggles as he
announced a thorough and sarcastic programme of help for the United Kingdom, a country that has suffered its worst summer of social unrest in
decades.
“Because we are responsible members of the global community.” Ahmadinejad told the Iranian press, wiping tears of mirth from his eyes. “And
have more experience quelling dissent than our Western friends, I today send a thousand of our most knowledgeable and tooled-up peacekeepers
to Hackney where I hear you’ve had one or two problems with your civilians, Mister Prime Minister of Great Britain. Ha ha ha ha.”
Iran’s Political Leader was then forced to use the shoulder of an aide for support until his bout of hysterics ceased. “Let a more prepared and
advanced state assist you.” Mahmoud went on, smirking. “We will ensure there is no repeat of such nonsense and teach Britain all sorts of things about the interaction between government and troublemakers. In return, all the glorious state of Iran asks is that you shut up about our nuclear programme and let us get on with enriching our uranium.”

prepared for the first planeload of highly-trained Iranians by arranging for them to be billeted in barracks outside of Aldershot. The

troops are expected to be installed in inner-city Primary schools at first, on the lookout for signs of trouble, although some have

expressed concern that cultural differences may mean our visitors will act a little heavy-handedly.

Home Defence spoke to an Iranian National Guardsmen to find out more, he told us: “It is no problem sir. We arrest young ruffians,

teach protestors a lesson, rape women who go outside bare-legged and shoot whoever questions the glorious regime of Allah’s chosen

Coalition Government Seventeen Months On: “I Think
We’re Doing Jolly Well” Says Cameron
Clegg Gives First Joint Ruling Enterprise Since Second World War “7 out
of 10”
08/09/11
The seat of government in Westminster and, on their return from summer break, it is time for our ruling coalition to look back and
reflect on their first year and a bit in office, the many achievements, and what needs to be done over the remaining three and a half
years to ensure re-election.
“We’re well on our way tidying up the mess left by that last lot and making this country a place for the moneyed classes to raise future generations of braying, public-school educated children with an overgrown sense of entitlement.” The Prime Minister, ‘Diddy’ Dave, told HDUK outside one of his palatial country homes. “Of course, there is still work to do; dismantling the NHS, revoking the welfare state, and winning whatever wars the country is currently engaged in, but generally I think you’ll find us Conservatives have outdone ourselves since being sort-of elected last May.”

Yet critics have pointed to failed reformations, the breakdown of social order, an impending double-dip recession, sky-rocketing

unemployment, endless strikes, and scores of failed policy initiatives as evidence that Cameron (left) may not be talking out of the accepted

orifice. ‘Diddy’ Dave was having none of it, saying these complaints fail to take in the wider picture.

“Personally, I came into this coalition with a single objective.” Cameron confided. “To screw over the poor and make the rich even richer while

pretending that wasn’t what I was doing, then getting away with it scot-free. So far I’ve totally managed that.”
“It’s been great.” He added.
But the Liberal Democrats were more willing to agree on room for improvement in the years to come, acknowledging their party, if not quite dead in the water, was unelectable for several generations, and that this meant there was “a bit to do” regaining the public trust.
“As the junior partners in this coalition we’ve managed to gain significant concessions within certain policy areas.” Vince Cable (right) told
us over the phone yesterday, reciting the words a bit like a robot might. “Admittedly, these concessions aren’t anything the electorate
cares about, like, say, tuition fees.” Cable continued, loosening up a bit. “But I think it’s important we’re here, if only to provide a
counter-argument when the Tories display their innate hatefulness towards non-whites, single mothers, immigrants, those on benefits,
and anyone who thinks the free market isn’t a very good idea anymore.” 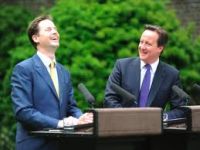