NEWSBLAST!
Convention Special
with Al Likilla
Home Defence UK
A Symptom of a Greater Malaise
Salisbury Man Sort of Meets Chick Who Played Princess Leia In 'Star Wars'
02/10/04
The dateline was October 2nd 2004 when HDUK travelled to Collectormania Six in Milton Keynes with Salisbury resident and inveterate poindexter Steven Gibbs, who waited excitedly to have his picture taken with Carrie Fisher, an actress famous for the 'Star Wars' series of films and owner of an impressive middle-aged spread.

"Me and Thrower (associate), were well up for some quality time with Carrie." Gibbs, 29, told Home Defence

exclusively. "But there were about a million people in the way so we thought it might be a good idea to go to

the pub until everything calmed down. The first beer went down well so we had some more. I was just finishing

my sixth lager when Thrower suggested we try and meet 'The Princess' while we could still see straight. That

turned out to be a mistake."
Fisher (48), is the scion of Eddie Fisher and Debbie Reynolds and famously took the piss
out of her legally-insane mother in the book 'Postcards From The Edge' which was then
adapted into a really average film. Carrie made her acting debut as Warren Beatty's
underage fuck-friend in 'Shampoo' and has also appeared in cinematic classics with
peoples' names in the title like 'When Harry Met Sally', 'Hannah and Her Sisters' and
'Drop Dead Fred'. She famously entered the Star Wars shoot a virgin, was entered by a f
ellow member of the cast, then left the set with her chastity overcome.
Indeed, George Lucas' space opera for children gave Fisher the chance to take part in a
hilarious incest-based sub-plot with Mark Hamill, but in real life the actress is less
interested in having sex with her relatives and more renowned for openness with fans
and interviewers alike, particularly young males. Gibbs was hoping to get his picture
with this dual-bunned icon of the seventies who went on to enjoy manic depression,
drug addiction and a cameo in Austin Powers. Unfortunately it wasn't to be.
"When we finally got to the queue a load of bouncers told us we weren't to take photos," observed Gibbs. "So I got my postcard and greeting off Carrie then stuck around for a bit, drunkenly fiddling with my camera. It was difficult to be inconspicuous and the security men kept trying to move me along. Then they started getting angry. I was scared so I turned to Carrie for help."
The subsequent exchange went like this:
Gibbs (pointing to the organisers and whimpering): "Carrie, those men are being nasty to me!"

Fisher (glancing at the bouncers): "Fuck those guys!"

Fisher (louder): "FUCK THEM! FUCK THOSE GUYS!"
Buoyed by this show of support from the most unexpected of quarters, Gibbs asked himself what Han Solo would have done, concluding that faint heart never won geek mementos. Ignoring the continuing threats from large hardmen, Gibbs tried to take a picture of himself with Fisher (see above). Unfortunately the security men were less than kindly disposed to this man responsible for the tirade of profanities they'd suffered at the mouth of Princess Leia. Gibbs gained his picture but got punched.
"It really hurt," he says now. "Luckily I was drunk out of my mind, otherwise I might have been worried about getting barred from next year's Collectormania Seven." It was at this point, injured and shit-faced, that the fanboys decided discretion was the better part of valour and legged it.
"I was standing outside French Connection, trying to catch my breath and feeling a bit down." Gibbs recalls. "Our day hadn't gone like I'd hoped, plus I felt like I was about to piss myself. What happened next was mad though. Me and Thrower were just discussing whether to come back to a fan convention that was obviously run by fascists when Dave Prowse happened along."
Yes, the man famous for immersing himself in black rubber to appear as Darth Vader was leaving the convention to get a thermos of tea from his car when he made Gibbs' day, much as he did all those years ago when the government needed a big man to 'green-up' and stop kids getting run over.

"Dave was lovely," Gibbs says now, clearly excited by the memory. "He might look a bit

like a cripple, but big Dave agreed to pose for photos when he heard how badly our day

was going and chatted for ages in that West Country language of his. We were made up."

Prowse, 69, is believed to have much experience of dealing with drunken geeks. In this

case he listened to Gibbs repeat "this means a lot Dave, it means a lot" several times,

politely returned his hug, then left, leaving the fan with a lovely glow in his tummy and the

beginnings of a hangover. 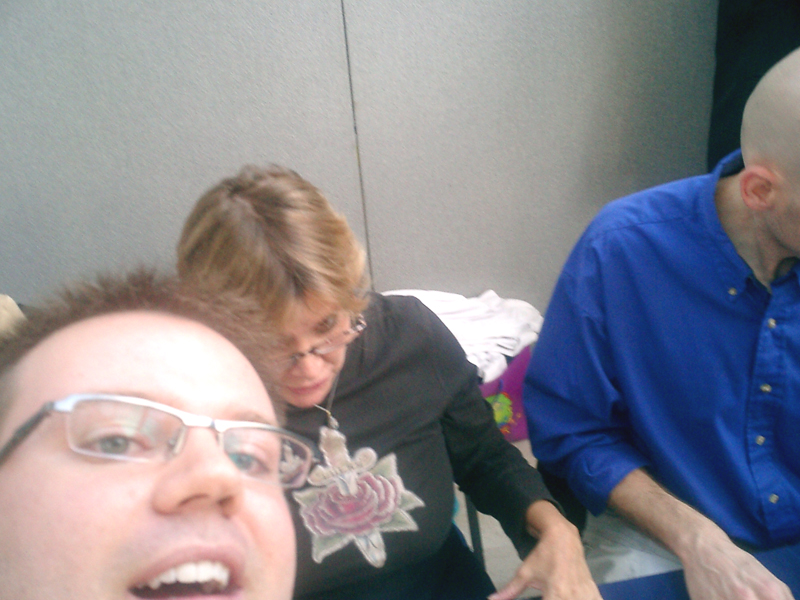 Gibbs with Fisher, kinda.
Thrower, Prowse & Gibbs: "Made up"
World Exclusive!
Salisbury Man Meets 'The Bandit'
06/11/04
With barely a pause for breath this Autumn, Salisbury resident and energetic follower
of the stars, Steven Jeffrey Gibbs, arrived at Wembley's 'Comic Con 2004' to meet one of
the highest-grossing actors in American movies between 1978 and 1984, the legend that
is Burt Reynolds.
"What a professional," beamed Gibbs when HDUK caught up with the fan while
organising his extensive collection of Cannonball Run merchandise. "This was a man
from the old school of stardom, back when heroes of the silver screen paid their fans
some respect. Or maybe he's just broke and was really grateful for the twenty quid it cost to meet him. Either way, Burt was the perfect gent. The moment I got the nod to approach him, the great man was on his feet with a hand outstretched, like he was the privileged one."
With introductions out of the way, this star of enduring masterpieces such as 'Rent-A-Cop', 'Cop and A Half' and 'The Best Little Whorehouse In Texas', was at Gibbs' disposal, and the fan didn't waste any time, informing Reynolds the time was ripe to release a special edition DVD of 'Hooper' because: "It's what the fans want", a request which Burt pondered thoughtfully. This 1978 picture features Reynolds as the eponymous stuntman who gets a bit upset when Jan-Michael Vincent proves he can do stunts too. Proving his worth, once again, as a barometer of the wider fan culture, Gibbs clearly hit on a commonly-held opinion, since Burt's gargantuan assistant expressed the same hope, the two of them agreeing that deleted scenes and a Burt commentary were among the 'extras' they'd like to see on such a disc. At this point Reynolds, who has worked in movies for over forty years and famously remains the long-time nemesis of Sheriff Buford T. Justice, went misty-eyed and began to reminisce.
"There's a lot of great stories attached to that picture." Waxed the leathery actor who, with Dom DeLuise, makes up one of world cinema's great double-acts. "A lot of guys nearly bit the dust on that one."
Mesmerised, Gibbs asked Reynolds to elaborate, at which point Burt put the fanboy on the spot by asking if he remembered that scene in 'Hooper' with the chimney. Out of his depth, Gibbs, who hasn't actually seen Hooper since he was twelve, assured Reynolds that the chimney bit was his favourite.
"Well," continued the former face of Dolland and Aitchison, measuring out an extremely small distance between his hands. "It fell that close to the back of my car. Very hairy."
Enthralled by this exchange, Gibbs says that the conversation may well have been the best moment of his life. Indeed, the meeting came to a fitting end when Gibbs cracked up at another of Reynolds' anecdotes and Burt pretended to slap him. 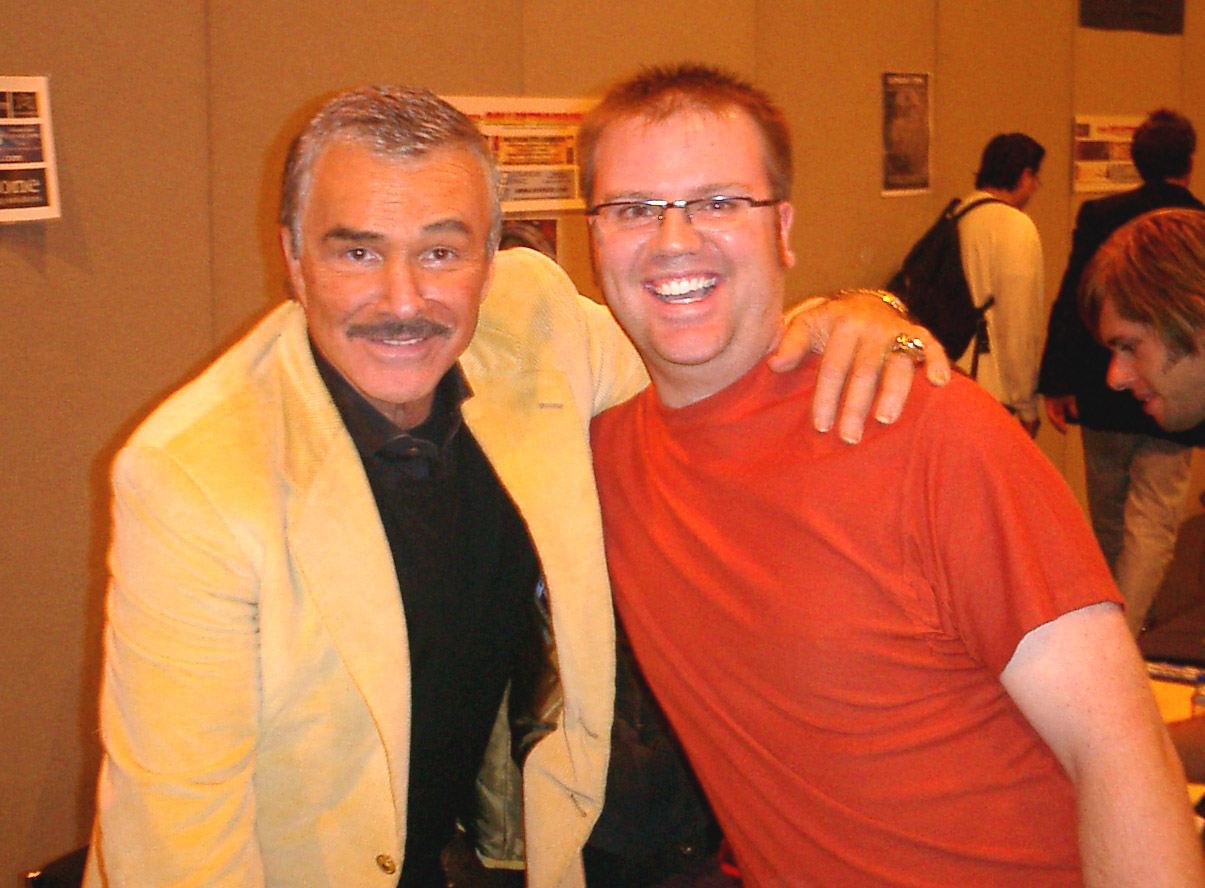 Gibbs & Reynolds: "The high point of my life"
ALL NEWS ROUND UPS: