The Westminster Village, where today a marathon Parliamentary debating session has ended with much behind the scenes
‘horse-trading’ as a controversial bill is finally enacted into law, pending finalisation of paperwork by the Lords. This much-discussed
white paper promises to revolutionise the electoral system and overturn our oft-criticised notion of ‘one person, one vote’, replacing
it with something much more aligned with the ideology of late capitalism.

“I’m so glad we’ve managed to get my new system finalised at last.” Conservative MP for offshore tax havens and the bill’s

author, Leonard Circus, told HDUK. “This is the first step to restoring everyone’s faith in the democratic process. What we’ve

done here is to enshrine in law the idea that it cannot be appropriate, for a markedly unequal nation such as ours, to have a

“Hopefully today’s result will nullify the terrible fear that, at next year’s general election, my party could be ousted by

ignoramuses who don’t know what’s best for them.” Mr Circus went on seriously. “We simply cannot allow great swathes of

economic illiterates who probably sniff glue all day on buses to destroy our successful austerity programme, or oust David

Cameron from power before his ‘tough, moral decisions’ have kicked in.” adding: “Although they’re clearly working incredibly

well already.”
“As well as allowing us to finish what we’ve started,” Leonard (right) continued. “This new system will apportion a
mathematically-appropriate level of votes to each individual over eighteen. We calculate that, by taking their current earning
capacity and overall wealth into acocunt, we can ensure everyone is allotted a level of influence that means Britain’s general,
local and European elections more accurately reflect the previously-unseen power plutocrats wield over every walk of our
society.”
Indeed, this new method of assigning influence is based on a sliding scale that assigns one-fifth of a vote to every immigrant or
long-term jobless, rising to 25% for members of the working class who are currently employed. At the top end of the scale, five
votes apiece will be provided for every citizen in the highest tax bracket, with anything up to a thousand given to the richest of
those registered.
In spite of Conservatives saying this represents a fair deal for society (where ‘society’ is defined as squires they meet for country suppers), many do-gooders have claimed these developments represent the withdrawal of suffrage, along with a potential degeneration of the nation into a dictatorship or corporatocracy. But a bedraggled and exhausted Nick Clegg today emerged from strenuous negotiations with his coalition partners to boast of the LibDems’ heroic stance against such
developments:

“Things could be much, much worse.” Cleggy (left) assured Home Defence. “The Tories didn’t want to give the poor even 10% of a

vote! Luckily for everyone I've put my foot down. Now five or more destitutes can band together to cast a single ‘collective’ vote,

assuming they agree on who to vote for. Chalk one more victory up to the Lib Dems!”

Back at the celebratory Westminster party, filled with captains of industry and billionaires from across the capital, an increasingly

sozzled Leonard Circus expounded on his philosophy:
“One man, one vote used to be the cry, back in the days of widespread oppression and fighting for the disenfranchised.
Nowadays our civilization has moved on and we can see that it’s morally wrong for some spotty teenager who knows nothing
of politics to have the same power at the ballot box as a titled baron or my dear old dad. Consider for a moment the hardworking
multi-millionaire who generates hundreds of jobs through multiple court cases or investigations into bribery, tax evasion and
illegal phone tapping? If that man pays more tax than average, surely he’s entitled to a greater say over where the country is
going?”
When asked where such a state of affairs left those who make a less mercantile contribution to the community; housewives or
mothers for example, Mr Circus clarified: “It’s a flat rate across the board: one woman – half a vote.”
To Prime Minister’s Question Time in Parliament where, earlier today, David Cameron surprised onlookers by
refusing input from others within the house, instead rising to deliver an uninterrupted monologue for almost an hour.
This soliloquy was apparently intend to explain how everything that had gone wrong with Britain since the turn of the

“You people, you come here every week to criticise me.” ‘Diddy’ Dave (right) began,

setting out his stall early on. “Saying we’ve been in power for four years and the coalition should have sorted things out by now. So I say

again; that isn’t enough time to clear up all Labour’s muck, not nearly.”

“We’re doing our best and it’s going great guns so far.” Diddy asserted. “Soon we’ll start to clear the deficit and from there it’s a small step

to fixing the global economy which Ed Balls there broke with the help of his mate Gordon… oh yeah, Bally-boy, don’t like that do you?

You crashed the car, bitch.”
As the diatribe continued Cameron went off on increasingly obscure tangents, asserting the recent floods were effectively the
fault of Ed Milliband because of his party’s inaction over dredging before going on about ‘mass immigration’ for a while. At this
point many MPs began to look to the Speaker for an intervention, only to find a stunned John Bercow (right) watching Cameron’s
performance open-mouthed, just like everyone else.
“Yes, Universal Credit is a bit of a fucking mess.” Cameron continued while, behind him, Chancellor George Osborne grinned
smarmily. “But don’t forget how inept the last Labour government were when it came to major IT projects. They set a very bad
example for novices in government when following that mess, so we can hardly be blamed for what's happened more recently.”

Mr Cameron then reeled off a list of areas in which the coalition have tasted abject failure such as green investment, house

building, tuition fees and student loans, the future generally and, in particular, the restoration of Britain’s chances at the

Eurovision song contest. For each example the Prime Minister went on to claim that the Labour government of 1997 – 2010 had

done just as badly, if not worse, making it completely justifiable for him to do less than brilliantly.

“Labour embraced armed conflict on many more occasions than us, don’t forget.” The Prime Minister went on as one fearful

backbencher tried to get a word in and failed. “Everyone has a go at me for accelerating the privatisation of the NHS after vowing

to protect it, but who started that process, eh? Eh?” He declared, jabbing a finger in the direction of the Labour leader, his puffin

face sweating profusely. “What about all those years of under-investment before we came to power? In that time the UK fell behind

nations like China or Nigeria in the space race and I can’t help us catch up, not by myself. No wonder
they take the piss out of us at international summits. Look again at Ed Balls over there – he’s got the surname ‘Balls’ for Christ’s sake!”
Mr Cameron then expounded on flaws within the ‘socialist mindset’ and its role in the decline of Empire, notably failing to mention the
government’s plans, his personal beliefs, or a vision for the future. The diatribe then ended with Diddy Dave once more mentioning “this
shit Labour left us in… all of us… Labour… their fault” and claiming it was “a ridiculous fantasy” to believe the poor could regain their
dignity simply by buying some food. Then he came over all peculiar and had to have a lie down.

The headquarters of the Church of England in central London

where, following a recent war of words between religious leaders

and those who run the country, the supreme deity took time out

from His busy schedule to manifest in corporeal form and clear

up any confusion, once and for all.

"A great deal has been spoken in recent months, about my teachings and intent, on both sides of your so-called welfare argument.” God boomed to an invited audience, flanked on one side by the Archbishop of Canterbury, Justin Welby, and on the other by the Dark Lord, Satan. “So let me categorically state, once and for all, that neither myself, nor any members of my immediate family, nor the Holy Ghost, condone starving poor people in some kind of social experiment, as many British politicians seem to think they do.”

As the devil (left) hissed his agreement and the Archbishop looked severe, God went on:

“What I want to make clear today is that I expect no better of your Conservative Party. Over the last thirty years they have drifted toward the

concept you mortals define as ‘evil’ and, as such, their recent behaviour is entirely in keeping with this ethos.

They may call themselves God-fearing men, but Iain Duncan Smith, George Osborne and all the rest know

not what they do. After all, it is easier for a camel to pass through the eye of a needle than a rich man to

enter the kingdom of heaven, so they’re shit out of luck and will be dealt with by myself and my associate

here in due course.”

“But what really gets my goat,” The figure in white went on, his sonorous voice resounding through the
building. “And led me to seriously consider raining fire down on Earth, are those of my subjects who profess to be decent, caring
and compassionate, but discard their value system in an instant when offered a taste of power. I’m talking about those men and
women weak enough they will do anything to retain a grip on this land.”
“Give a man the top job and you shall see his true colours; corruption, mendacity and heartlessness.” God asserted as a series of slides flashed up behind him, all depicting Liberal Democrat members of the coalition from Vince Cable to Danny Alexander. “You soon see their true colours, oh yes. Such men would remove state

support for the struggling, collude in rising homelessness and assert any resultant fall into poverty, malnutrition and despair

among families who cannot make ends meet is somehow necessary in the eighth richest country in the world. A world I

created in seven days, lest we forget.”

At this point a picture of Liberal Democrat leader Nick Clegg appeared above God’s head, where it remained for the rest of His

shall now be smited by myself; sentenced to suffer unceasing pain on their immortal souls.”

God announced as Satan began to bang his pitchfork on the floor excitedly. “And I’ve reserved
a special place in the fires of damnation for chief betrayer, turncoat and wrong-doer, Nicholas Clegg, where he will burn for all eternity.. No
questions.”
The all-powerful deity then disappeared into thin air, leaving behind a gaggle of shocked journalists. In response to inquiries, the Liberal
Democrat party has issued a statement maintaining that the current Deputy Prime Minister is ‘unavailable for comment” although,
unofficially, Clegg is said to be hiding in his attic and crying for mummy.
POLITICAL NEWS ROUND UP
with Al Likilla
Home Defence UK
A Symptom of a Greater Malaise
God Confirms All Liberal
Democrats “Going to Hell”
17/03/14
ALL NEWS ROUND UPS: 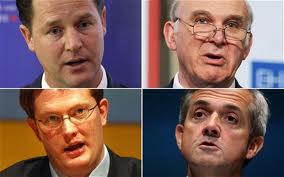 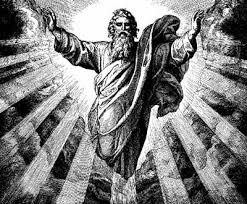 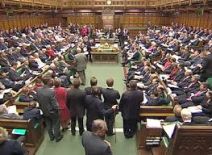 Cameron: “Everything That’s Wrong With This Country Is Entirely Labour’s Fault”
08/03/14 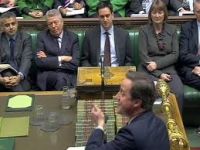